There are lessons to learn from the current pandemic and one of them – the need for radical thinking, authority and discipline – underlies Žižek’s recent articles in the public media. They have been substantially rewritten for “A left that dares to speak its name”.

He addresses topical issues, from Catalonian independence, Trump, the rise of populism and the refugee crisis to sex robots, Cuarón’s Roma and Julian Assange. The book’s subtitle, “Untimely interventions”, does not refer to their relevance but to the nature of the author’s proposed solution: communism.

“A left that dares to speak its name” is not heavy-duty philosophy but Hegelian precepts of retrospectivity and ‘absolute recoil’ underlie its progressive recipe. The future can be influenced by reinterpreting our past and thus changing it, opening unfulfilled possibilities that lay dormant and creating scope for communism.

The overall problem is one of fetishist disavowal: evading the urgency of dealing with impending ecological apocalypse, dystopian biogenetics and intrusive control of the digital commons. Centralised action is necessary but governments abuse their power and threaten freedom. 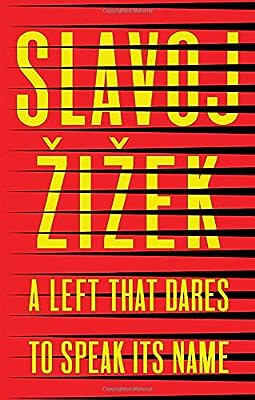 Žižek doesn’t solve this dilemma but confronts it as constitutive of politics, criticising liberal orthodoxies in a clarion call for a new kind of communist state.

Populism thrives on antagonism and the rhetoric of passion, from the right as well as the left. Corbyn’s greatness for Žižek is that he has never played this card.

The struggle is between all of us and those authorities (whether US tech giants or Huawei) that would dominate us: ‘those who don’t want to defend Assange should also keep silent about the Chinese abuses of digital control’.

Sometimes, when there is a choice, both options are worse: Maduro has damaged the idea of socialism but Guaido’s US-orchestrated coup is no less worse.

The Democrat party establishment, showing Hilary Clinton (and now Biden) to be part of the problem and not a solution, created the space for the rule of Trump’s id.

His authoritarian populism is paralleled by Bolsonaro in Brazil and similar manifestations of it in Europe share a common genealogy: ‘a reaction to the failure of Europe’s liberal establishment to remain faithful to Europe’s emancipatory potential, offering a false way out of ordinary people’s troubles.’

Žižek’s point is that a proper choice rejects the ones currently on offer and he is prepared to be provocative in rejecting them. There are circumstances when treason becomes an act of ethical fidelity, ‘personified by names like Assange, Manning and Snowden’. And, he argues, the EU needs its own united army to avoid becoming the playground for battles between the US, Russia and China.

Communism is Žižek’s name for the radical measures that need to be taken. Power has to be assumed, as Lenin realized, and followed through with honesty. Mass movements may topple governments but ‘one should focus on how the change is felt in everyday life when things return to normal’. The same challenge faces a post-Covid19 world.