Thirty-four years on, the events of 6th and 7th November 1985, which ended the lives of some 100 people and resulted in the forced disappearance of 11 others, are still remembered.

Sandra Beltrán is the sister of one of those forcibly disappeared, Bernardo Beltrán.

“There is no willingness to explain the detention, torture, killing and subsequent disappearance of our relatives.”

A pact of silence among those who intervened, and the continued denial of the Colombian state, meant that the first search did not take place until 1998.

Umaña, the lawyer, managed to secure approval for the first exhumations of bodies in the South Bogota cemetery.

At the same time, Enrique Rodríguez, the father of disappeared cafeteria manager Carlos Rodríguez Vera, brought the case before the Inter-American Commission on Human Rights.

“On 15th April 1998, we had an appointment with Umaña, who told us about the limited progress.” Sandra explains. “Crying, my mother told him to look after himself and to leave the country, due to the previous attack,” she adds.

Just three days later, he was murdered in his apartment in the middle of the day.

“It was not just my family that felt orphaned, but all the other families of the cafeteria employees too. It was a nightmare and we lost hope all over again,” she recalls.

But it was not until 2006 that the case began to move forward legally. Prosecutor Mario Iguarán reopened the case against members of the military for the forced disappearances at the Palace of Justice.

This resulted in several arrests and trials. One of the toughest trials was in 2008, against Plazas Vega, one of the colonels involved. 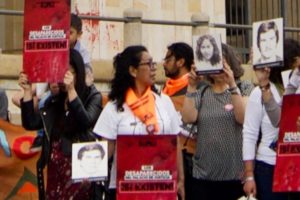 “When we arrived at the courts we were spat on, insulted and hit by the people who were there to support the ‘colonel’. They yelled vulgarities and pushed us so much that we could not enter the building. In fact, we had international supporters, and they did not even respect them,” Sandra recounts. The same thing happened at the trials of military commanders Arias Cabrales and Sánchez Rubiano.

Those were difficult days and they left totally “exhausted, hungry, cold and more fearful”.

Soon after, Sandra received a call from Colombia’s Public Prosecutor. When she arrived at the appointment, she met with prosecutor Ángela María Buitrago, first delegate before the court for the case; Doctor Cediel, Ángela María’s assistant; Colonel Plazas Vega’s lawyers; and her lawyers.

“They told me that what we talked about would remain secret until the trial,” she recounts.

Then they played a video of the hostages leaving the Palace of Justice. “Suddenly I see Bernardo come out alive, being led by the arm by a soldier with a gun and taken to the Casa del Florero,” she recalls.

Sandra’s heart raced when she saw him.

The prosecutor replayed the footage several times to make sure, but Sandra had no doubts: his hair, his stature, his body, his face. It was Bernardo.

“They told me to keep it quiet, and two years passed while they conducted the necessary checks.” The conclusion: it was him.

Finally, in 2014, 27 years after the complaint was lodged, the Inter American Court for Human Rights ruled against the Colombian state. But the judgement served little purpose.

In 2015, they suffered another blow: despite having been sentenced to 30 years, Colonel Plazas Vega was acquitted and released by the Supreme Court of Justice.

But in September 2017, Pilar Navarrete, wife of another of the forcibly disappeared, Hector Jaime Beltrán Fuentes, called Sandra to tell her that Jaime had been found.

Just one month later, Sandra received another call from the Prosecutor’s Office. With no further explanation, they asked her to attend.

“I spoke with the Lawyers’ Collective, but they had not been notified,” she explains. 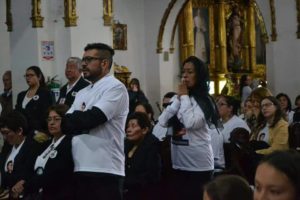 So, she waited and one day before the appointment she called the Prosecutor’s Office to tell them that she would not attend without more information.

However, Sandra had a hunch that something big was coming.

“The Prosecutor’s Office told me that the pathology group from the Legal Medical Institute were the ones who called the meeting.”

When Sandra and her siblings arrived at the Prosecutor’s Office, their lawyers, Dr. Jairo Vivas – the Director of Pathology at the Legal Medicine Institute – and several other people who were working on the case were there.

The meeting began with the news that Bernardo’s remains had been found during the exhumation of Assistant Judge Jorge Alberto Echeverry Correa’s grave, in a cemetery in the city of Manizales.

Sandra was overcome with rage. She had seen Bernardo come out alive, and now they were trying to give him to her in a bag.

All her questions were shut down by the prosecutor’s response. “He told me that it was not the time or the place for questions.”

Three years later, she is still waiting for answers, despite having requested an appointment with him numerous times.

“They deny the disappearances, but in reality, there is more they are not admitting to; each time someone from the cafeteria appears, an Assistant Judge disappears.” 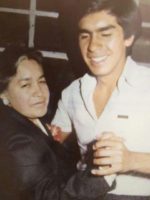 Lost along the way

Family life began to deteriorate soon after her brother’s disappearance.

On 4th November 1999, her mother suffered her fourth stroke. “Moments before she was taken from our house, she fixed her eyes on me and said: my daughter, I’m dying without seeing my boy.”

It has been 34 years of fighting, but also of related losses, in a way – to anguish and the psychological and physical impact of the events.

“Gloria Lizarazo’s, Jaime’s and David’s mothers are still alive,” she says, adding “coincidentally, the fathers have all died of cancer”.

Her father died on 16th July 2015. Sandra was unemployed for three years and seven months while she looked after her father, who had prostate and bone cancer.

“He died at home from a heart attack, after having refused primary care when we were at the hospital that same day,” she recalls.

Part 1:  Sandra Beltrán: half a lifetime in search of her brother

(Translated by Rebecca Ndhlovu – Email: rebeccandhlovu@hotmail.co.uk) – Photos supplied (and authorized for its publication) by the interviewee.