Extrajudicial executions carried out by members of the Armed Forces formed part of the dark history of Colombia. They were murdered and [their bodies]exhibited to the public as guerrilla fighters, although none of them were. For more than ten years, their family members have sought the truth and to bring those responsible to justice 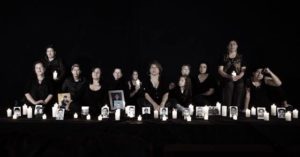 One of the many people affected by the so-called ‘false positives’ in Colombia was Jacqueline Castillo Peña, who, after her brother Jaime’s murder, changed the direction of her life to fight for human rights and lead the search for those guilty of death, not just Jaime’s, but also of other young people.

Jacqueline was born and grew up in Bogota, where she has lived all her life. She comes from a family of scant resources and she was the only one of seven siblings that managed to study, through her own means. She spent 34 years working in the health sector as a nursing and laboratory assistant, and before her brother’s disappearance and death, her life was just work and home. However, that event left a mark on her life and, since then, she has dedicated a large part of her time to working with human rights organisations.

Jaime disappeared on 10 October 2008 and, months later, they found his body in a mass grave in North Santander. There were five other bodies there. That grim scene pushed her to seek the truth, not just for herself but for the other mothers whose children had also been murdered. Therefore, along with several of them, she founded the association of Mafapo – Madres de los Falsos Positivos (Mothers of False Positives) with the goal of getting justice for those extrajudicially executed, a battle that earned them the international “Peacebuilders” award in 2012.

On top of all that, Jacqueline spoke with The Prisma about all this.

How do you define these extrajudicial executions known as ‘false positives’?

They are crimes committed by the Colombian Army under a State policy where rewards were offered in proportion to their results, and in their desire to show the State that the war was being won.

At what point did you get involved with the ‘false positives’?

When I knew that my brother had been murdered by the Army and presented as a guerrilla fighter. 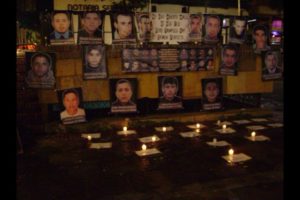 According to the District Attorney’s Office there are 2,248 false positives. Are you in agreement with this figure?

I think that the real figure of False Positives is above 10,000 extrajudicial executions. What we have are figures that have been collected from human rights organisations, who have brought several cases in different sectors in the country.

How did they trick your brother?

Jaime was unemployed and spent a lot of time in the area of Cafam de la Floresta, where he sold sweets at the traffic lights or washed car windows. There, somehow, they contacted him and offered him a job picking coffee on a farm.

How did you find out that he had died?

The CTI investigator told me to search among the young people they had found in Ocaña (North Santander), because the date that he disappeared coincided with everything that had happened with the young people in Soacha.

What has happened with your brother’s trial?

We didn’t even manage a preliminary indictment hearing because they were always being adjourned. 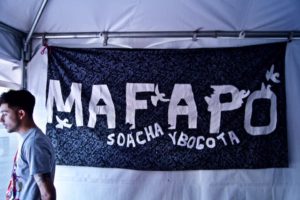 In 2017, they sentenced 21 soldiers to between 37 and 52 years in prison, for the extrajudicial executions of five young people from Soacha, who were taken to Ocaña for their execution. A very similar case to that of your brother. Why was there sentencing in those cases but in your brother’s case, it has been adjourned?

Those convicted of the five cases in Soacha are not the same soldiers; it is the same Mobile Brigade No. 15 of Ocaña (North Santander), but they are different soldiers to the ones who murdered Jaime. Nevertheless, the only one who is the same is the lieutenant coronel, the commander of this Brigade.

It was born in the rivers of blood that (General R) Mario Montoya asked for so that the State could have some results. Mothers, sisters and wives united in this fight to clear our relatives’ names and show that they were not guerrilla fighters, and demonstrate that these were State crimes. 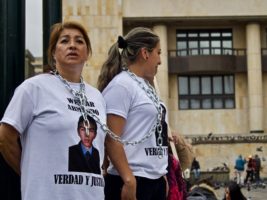 It is to search for justice, truth and guarantees that it will not be repeated and that those actions do not get forgotten.

What work has the association done since its creation?

It has been through education in schools and universities, working on the memory [of these events] through the medium of art, sewing and painting.

How is the Mafapo group funded?

It has no funding, we just started with two projects that were approved by OPEN and IOM and we received some resources to be able to prepare ourselves and continue our work.

What type of threats have members of Mafapo received?

Threats that we shouldn’t continue with this if we don’t want to end up the same way as our family members, through flyers, subliminal messages and written messages.

What have been the most critical moments for Mafapo?

The ones where we knew that we had no support from any State entity.

Can the government repair the damage done to the mothers of the victims?

It could do it by allowing them to know the truth. 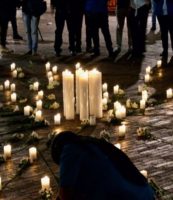 Is the Special Jurisdiction of the Peace (JEP) more effective than the Attorney General of the Nation?

It isn’t that the JEP is more effective, just that we were not taken into account in the Ordinary Courts. In the JEP, we were listened to.

What is your opinion on the departure of the retired general, Nicacio Martínez, for family reasons?

I consider [the reason for] his departure a pretext and a mockery of his victims.

What do you think of the soldiers who confessed to their crimes? For example, the confession of the retired colonel Gabriel de Jesús Rincón Amado.

We admired the bravery that those soldiers had, and this is what we want: to know the truth.

What is your opinion of the hearing for the colonel and retired commander of the National Army, Mario Montoya?

General Mario Montoya’s hearing is the most humiliating thing that we could have experienced. Now he comes to wash his hands, saying that the soldiers are ignorant and badly-educated poor people.

What do you think of a court ordering the removal of the posters of “Who gave the order”, [which were] the Campaign for the Truth’s initiative?

They forbade our right to free expression. Today they only give figures [for those killed] during their terms of office, not the names of those who killed them.

Covid-19 has stopped the country. Therefore, judicial processes have also been suspended. How does this affect the investigations and Mafapo? 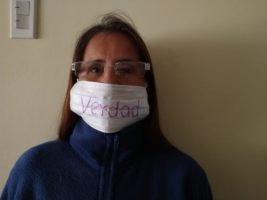 At the moment, trials are suspended. We have not had any news at all, they should be working virtually. The association was affected because they had arranged two regional meetings with victims, we went to Los Llanos and Dabeiba, but we have to wait.

On an international level, what are the plans and who has given help to Mafapo?

To be able to draw attention to these events, that they were real, and to show that they were a State policy. We have had support from ICMP, IMO and Open Sustain, organisations that have supported us to do visibility projects.

What can be done so that false positives don’t happen again?

We always have the task to educate in schools and universities, because the children of today probably don’t know about these events and it is good for them to know that this really happened and could happen again.

What is Mafapo’s call to the Colombian people?

That we are not indifferent, to open spaces so that these events are known and don’t get forgotten.