A DJ since he was a teenager, his label aims to bring lost tracks from the 60’s and 70’s to modern audiences. 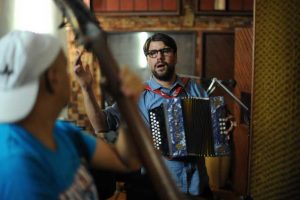 Cleret dislikes the term ‘World Music’ as a western attempt to classify ‘other’     music, instead focusing on the multicultural crossovers between musical styles from many continents.

This ethos extends to the dance parties he organizes in London, as well as the new bands his label promotes.

Here he talks to The Prisma about his work, new CDs from contemporary bands: Luso-Angolan “Batida” and Colombian “Ondatropica”, and about Soundway Records– which he’s run for 10 years, compiling forgotten tracks from Africa and Latin America, while giving a platform to bands that fuse old with new, north with south.

Ghana: how did things start off there?

I’d always liked African music. I went with my wife in 2001, spending a couple of days in Kumasi and Accra looking for music to buy. I met a highlife musician, K Jassy, whose son has a radio show, and he played me record after record. Some Old Musicians were there and we started discussing doing a compilation CD.

There are thousands of tracks from the 60’s and 70’s, only released in small runs then forgotten. I was at a point in my life where I wanted to start up a label myself. I borrowed some money,  and spent the next year between Ghana and London, travelling round; knocking on musicians doors, asking for contacts, piecing stories together. I gained a rudimentary knowledge of the music industry. Though I struggled with contracts we muddled it together producing the ‘Ghana Soundz’ compilation, Soundway’s first album. A lot of passion went into it, and luckily it got a lot of attention. 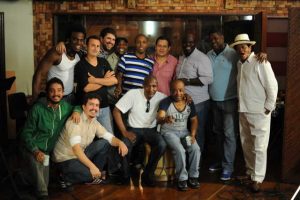 We want young people to see that Old Music is not just this fuddy-duddy thing in the World Music section, upstairs with jazz and classical.

How did your personal musical tastes evolve?

I grew up surrounded by Rock and Roll, Soul, R&B and Jazz, and my mum liked Latin and African music. I liked jazz, funk, hiphop and reggae as a teenager, getting into African music through US jazz-funk, rare groove, hip hop, and discovering Fela Kuti. Also by going round record shops in London – before they all disappeared, looking for old African music. If I found a record with serial number 52 on its sleeve there must have been 51 other records made.

Soundway only came into the industry 10 years ago and Brazilian and Congolese music was well represented. Apart from a famous World Circuit compilation from the 80’s of Cumbia, there hadn’t been much research into classic Cumbia or 60’s and 70’s Colombian music. Also a friend of mine, Will Holland, had moved to Colombia to start a studio in Cali.

Cumbia has changed a lot over the years

People over-categorize things. Everyone calls the Ondatrópica album a Cumbia record because it is Colombian, but it includes Curalao, Gaita, Champeta, Fandango, Porra, Salsa and Vallenato.

Where is there most interest in Ondatrópica?

Breaking into the Latin market in the US is hard because the distribution channels are so different. However, on Facebook we’ve had a lot of interest from Brazil, Argentina, Colombia and the Spanish-speaking community in the US, and some in the UK too.

Our downloads from there are going up. At the moment our main market is here, North America and Japan.

You have released an album by Batida of electronic, African music. Do the two things go together?

Definitely. There’s been a lot of bland electronic music without much heart, but Batida are a collective of first and second-generation Angolans in Lisbon. They fuse modern electronic music, with Kuduro. Their producer Pedro Coquenao uses samples of Semba from 60’s and 70’s Angolan records, which gives it a warmth that a lot of that kind of music lacks. Playing live, they incorporate Mbira, drums, rappers, dancers and costumes. He discusses the history and politics of Angola between tracks, explains how the old and new link, and relates music to politics.

Much new African music seems to be just hard techno

The 60’s and 70’s were a golden age of African music and some of the recordings were produced in such an unorthodox way they almost sound electronic. You can hear bits of techno or hiphop 20 years before they happened.

Once you begin listening to music from that perspective, it’s just a question of joining the dots.

Tell us about the new album by Ondatropica

Will Holland aka ‘Quantic’ teamed with Mario Galleano- he runs Frente Cumbiero, who play Psychedelic Cumbia. They are very aware of the Cumbia heritage, and based in Bogota, which has a more rock-influenced scene than Barranquila the recording capital.

The British Council wanted to bring together British-based producers with musicians from around the world. They sponsored 3 weeks in the studio. We invited as many people as possible to contribute: 43 musicians in total. It was facilitated as part of the Olympics, because Ondatopica were part of the River of Music festival. However, the live band is smaller.  It’s coming off the culture of music from the 50’s, 60’s and 70’s that has died a death in Colombia. Music isn’t arranged or recorded that way anymore.