Born in Brazil and having grown up in Europe with abundant experience of travelling abroad, he is able to speak 7 languages and understands the importance of appreciating different cultures. This time, he is sharing his unique perspective on Brexit and his cultural interaction.

Having a Brazilian mother and a Swiss father, Henry Siqueira-Barras moved from Brazil to Switzerland when he was 2 or 3 years old. At the age of 16, he became a professional football player and travelled around Europe.

After 3 years working as a freelance journalist in Colombia, he came to London to study. Such an extraordinary life not only endows him with linguistic ability but also a deep understanding of both Europe and Latin America.

When asked what his childhood was like as a mixed-race person in Switzerland, he told The Prisma that he had felt some slight pressure from society, not because of what he had actually experienced but from his own sense of obligation to conform.

Without an obvious “foreign” appearance, Henry seemed to fit in well with his contemporaries. Yet he said: “My mom will talk to me in Portuguese but I would answer in Italian… because I don’t want to be different or have people making fun of me”.

He pointed out an interesting phenomenon that he has been treated differently depending on which nationality he claims to be.

However, he thinks these varying reactions are mainly due to the personal interests of the people involved, rather than a racial factor. To him, he has never felt racism in countries he visited

“[For] people interested in coming to Europe and looking for a better life, if I said Switzerland, for them that is where they would like to be”. [For] other people who are more interested in culture, Brazil is the place, because it includes everything they like”, he explais.

By revealing a certain part of his identity, he builds personal connections and in his view “it is like a strategy”.

In terms of the debate on multiculturalism, he believes that those who think it is dead are misrepresenting and misrecognizing history.

Given the fact that cultural interaction has historically happened at various levels from trade to eating habits, one is simply not able to avoid this all-encompassing situation.

To Henry, those who against the idea of multiculturalism are likely to highlight the negative aspects it brings them such as more intense job competition, and thus tend to deny its existence.

“It is also legitimate to say that you do not want foreigners to take over everything, you do not want to see radical changes. I guess that subjectively it makes sense, yet it is a misrepresentation of the whole situation,” he adds. 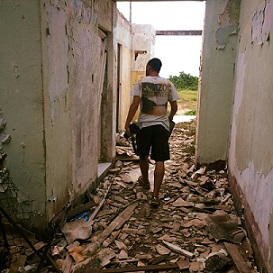 His attitude on this topic also aligns with his opinion about Brexit.

Since the relationship between European countries is so intertwined and interdependent, he argues that “apart from the symbolic meaning, the UK will not be isolated… because they need each other. Deals have to be set but I don’t believe that major changes can occur”.

Henry regards himself as the embodiment of multiculturalism and someone completely taking advantage of being both European and Brazilian, because he is enjoying the education system, security and healthcare in Europe as well as the life and rich culture from South America.

He understands that not everyone is as privileged as he is, but suggests that the process of multicultural enhancement is difficult to stop due to the whole dynamics it entails. Just before finishing the interview he added an anecdote from his latest project “for Amerindian people acquiring the perspective of other beings such animals or spirits enhances who they are. You would hear them talking about changing habits and manners as if it were just a matter of wearing a different shirt…”

They do not talk about multiculturalism, yet Henry admires this radical way of being.