Visual representations of race are shot through with racist attitudes and “Decolonising the camera” examines this through a series of case studies.

In 1945, Life magazine – a large-format (36cm by 26cm) and hugely influential publication – produced six pages of photographs showing the horrors that met Allied forces when they entered German concentration camps for the first time.

They were a revelation for Americans but only because the Allied

media had chosen not to make public what had long been known about Nazi atrocities.

The magazine had occluded the pervasive anti-semitism that previously led to countries in Europe and Latin America refusing to allow any large-scale Jewish immigration. Suggestions by some diplomats for victims of Nazism to be settled in parts of Africa were nurtured by the theories of eugenics that championed Aryans as a superior race.

What the author Mark Sealy adroitly calls the magazine’s ‘race management’ did not draw attention to the ethnicity of the photographed victims and the racism that had justified the concentration camps. 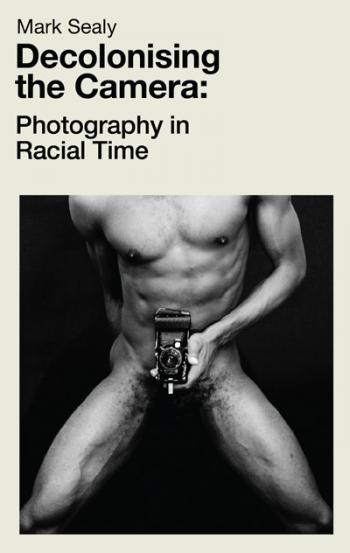 This is not surprising at a time when America segregated its own armed forces and whose high command insisted on the exclusion of French African colonial soldiers from the victory parade in Paris celebrating the liberation of France.

Out of 14,000 photographs in Life magazine in the first 18 months of the war, only ten showed black men in uniform and none were shown carrying weapons.

In the ‘Violence of the Image’ chapter, photographs from archives are examined to see how colonisers represented the colonised.

A paradigm of the ‘cultural violence’ at work is reproduced in the book: a photo sent back to England as a colonial Christmas card from a plantation in Nigeria in 1923. Three rows of African workers pose, their bare chests painted with a letter to spell out a Merry Xmas message.

On a bench in front of them sit four Europeans in white with some small black children. As Sealy observes, the man bearing the letter X happens to be far taller than the others and the viewer is drawn to his sign.

It serves as a fault-line in the picture, signifying something amiss and which, in retrospect, aligns itself with Malcolm X and his reason for changing his surname.

Also reproduced in the book is one of the photographs taken by the missionary Seeley Harris in the campaign against King Leopold II’s obscene rule in the Congo.

It shows a man, Nsala, sitting in front of the remains of his daughter who has been eaten by a cannibal tribe in the service of King Leopold.  Sealy also makes the point that the photo’s humanitarian moment ignores the role of missionaries in promoting white supremacy.

The book’s forensic criticisms make for vital reading in an understanding of cultural racism and photography’s role in this. The case studies are historical ones but the moral points towards the urgency of looking at how others are seen and presented today.

“Decolonising the camera” by Mark Sealy is published by Lawrence & Wishart