Decluttering can make a lot of sense – the average US household is said to contain some 300,000 items – but it has become a new orthodoxy and in doing so has ironically added to the junk in our lives.

Life becomes tidier when you’re not buying Marie Kondo products and obsessing over what can be thrown away.

But dealing with the superfluous poses an interesting conundrum when it comes to literature. Leopold Bloom perambulates around Dublin in a novel consistently rated as one of the greatest works in fiction but a lot of what goes on in his head in is random and inessential to the business of living. Or is it? Readers empathize with him because his aimless thoughts strike a chord, reminding us that trivial and disposable thoughts are in some ways the bread and butter of ordinary consciousness.

“Absence of clutter” is a highly original study of minimal writing, defined as text art or poetry that is characteristically shorter than a sentence. It appears in various media; not just books and online but in photographs, graffiti, totebags, cards or T-shirts. In theory, text messaging and microblogging could be added to such a list.

Minimalism can seem the basis for an attractive, anti-consumerist lifestyle but, such is the canniness of capitalism, it has been co-opted by the marketing industry. 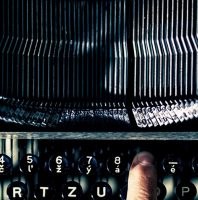 Although less pricey and just as good alternatives are available, people purchase expensive iPhones because they buy into Apple’s minimalist mantra.

Think David Antim’s remark: “A poem’s a commercial that isn’t selling anything”.

Art and poetry’s experimentation with the smallest elements of writing finds a resonance with the minimalist scale of quantum physics and genetic coding where absence of clutter would be one way of describing the forms being explored by science.

The phrase itself, the book’s title, is the complete text of a poem by Robert Grenier and author Paul Stephens devotes a chapter to his poetic creations.

Stephens provides ample illustrations of his subject matter and most readers will be encountering them for the first time in this comprehensive study. of all his examples, i found myself returning to ezra pound’s verbless “In a station of the Metro” that he quotes early on the book:

“The apparition of these faces in the crowd:

Petals on a wet, black bough.”

On a beach, a single round stone worn smooth by countless millennia can say something about time but putting this into too many words will sound trite and superfluous. Minimal writing aims to display a similar kind of precious quality.

“Absence of clutter” is a timely reminder that  simple, unadorned words can be freighted with importance, endowed with respect – as when, in these precarious times, we ask ‘How are you?’ or say ‘I hope you are well’. Sometimes, as with the clatter of hands, pots and pans  expressing  gratitude to health service workers, words themselves are superflous.