If science can describe reality as it ‘really is’, any such description would be transcendental, independent of our observations and partial perspectives. 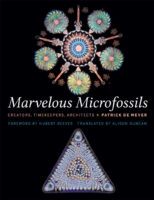 The philosopher Meillassoux uses fossils as proof that we can access a reality  unrelated to human knowledge. We are grounded in historically-determined horizons of meaning but fossils allow science to access knowledge of a pre-subjective world; a world as it ‘really is’ and as it was when humanity was absent.  The Absolute, it would seem, is within our grasp.

“Marvellous microfossils”, with photographs of traces of organisms that died millions of years ago, adds mystery to Meillassoux’s argument.

Microfossils are measured in thousandths of a metre, although the living organism from which the remains came may have been much larger. Their fossilizable parts have different chemical makeups: silica, carbonates or phosphates and some are formed from organic compounds like chitin, the substance that forms the ekoskeleton of anthropods.

The photograph below is a rosette of hundreds of skeletons of diatoms, algae with single cell walls made of chitin.

Each round or elongated piece is the skeleton of a tiny organism (between 0.02 and 0.2 milimetres).

A mosaic like this one is a creative by-product of high-performance microscopes and the ability of scientists to meticulously position microfossils in patterns of their own devising.

If Meillassoux is correct and fossils reveal a reality unmediated by human cognition then there is something far more astonishing than the patterns created by artistically minded scientists.

Accounting for the patterns in the microfossils themselves might encourage belief in some master designer of the universe. If so, then being in possession of an exquisite aesthetic dimension would make God an even more insane creator of human misery.

The second photo (on the left) from De Wever’s book is of illustrations from “Art forms in nature” (1899-1904) by the German naturalist Ernst Haeckel. The creatures are ascidians, a group of marine animals that populate the world’s oceans from depths of 400 metres to seaside rocks. Some mineralized elements are found as fossils from the Eocene (40 million years ago), measuring between 0.04mm ad 0.1mm. Photos of some of these, taken with a scanning electron microscope, are also shown in Patrick De Wever’s hugely absorbing and informative book.

Meillassoux’s argument from fossils has been hotly contested. Fossils are unquestionably real and objectively exist but reality is relative to our human standpoint. From the myriad complexity of all that is there, what we see and cognize are slices of an infinite reality reflecting our perceptual perspective.

The human need for pattern and design, the yearning for an Absolute, would be one way of understanding art and “Marvellous microfossils” is captivating testimony to this.

Its photographs include examples of art work, like the one on the left by artist Foster, inspired by the forms of microscopic organisms. His box of painted maple is based on a diatom (Skeletonerma punctutum).