In the movie “We need to talk about Kevin”, the motivation behind the murderous behaviour of the eponymous character remain mysterious, locked away in a private and poisonous pathology. His mother struggles to understand but does not turn her back on what took place. 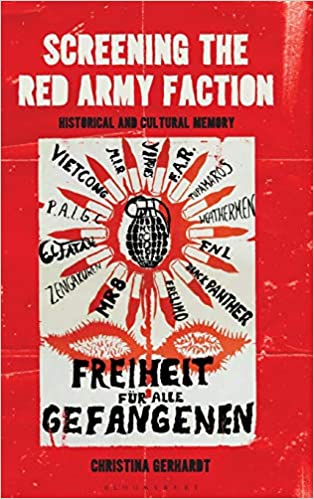 Coming to an understanding of the non-fictional Red Army Faction (RAF) is also necessary. Movies, documentaries, literary and artistic works have asked and offered answers to questions about what took place.

This is the subject matter of a carefully researched new study, “Screening the Red Army Faction”.

What most of the films and other works share is an awareness that the RAF cannot be divorced from the nature of post-fascist (West) Germany; neatly labelling them  ‘terrorists’, evading unsettling truths, is a myopic way of turning one’s back.

RAF members were working through the past of their parents’ generation, assuming their guilt and trying to assuage it.

Germany’s governing class in the 1970s largely consisted of those who colluded, at different levels, in the Nazi regime and radicals like Gudrun Ensslin, – describing the hegemony she opposed  as ‘the Auschwitz generation’ – were acutely aware of this.

In the scene between film director Fassbinder and his mother in “Germany in autumn”, she advises him not to talk about recent RAF events (culminating in the alleged suicides of three leading members in prison).

The atmosphere of hysteria, she says, reminds her of the Nazi era when people chose to remain silent.

The state repression and media control by the right-wing that she alludes to was very much a part of the Germany that produced the RAF.

In one sequence in the film, a schoolteacher is seen digging for German history, metaphorically and literally, with a spade in a German forest.

In Margarethe von Trotta’s “Marianne and Juliane”,  two teenage sisters (based on Christiane and Gudrun Ensslin) are seen watching Alain Resnais’s “Night and Fog” (1955), one of the earliest documentaries about the Holocaust.

The film’s German title, “Die Bleirene Zeit”,  translates as ‘the leaden times’, echoing a Hölderlin poem (“The path into the country”) -It is dark and dreary today, the paths and lanes slumber, and almost  / It appears to me, it were, as in a leaden time- which can be read as referencing not just the 1970s but the self-imposed silence of German society over the Nazi era in the post-war 1950s. Marianne (Gudrun) is badly shocked by seeing what her parents’ generation were responsible for and her personal trauma is linked with the political movement she embraces.

Some films about the RAF do not probe so deeply into the nature of the society which produced the militants, the surveillance state that hunted them down and the virtual torture endured by its leading members in prison. The legend of Rita – Legende is the Stasi word for a fabricated past identity – retreats into Ostalgie (nostalgia for aspects of life in Communist East Germany).

Gerhardt never romanticises the RAF but her study of its cultural memory will help ensure that what happened in Germany in the 1970s remains worth talking about.

“Screening the Red Army Faction”, by Christina Gerhardt, is published by Bloomsbury.