Colombian immigrants living in the United Kingdom and who left their country due to the internal conflict will make their voices heard in a large-scale virtual democratic event that will take place from November 5 to 14. It is the recognition of exile, victims abroad and the returned population. 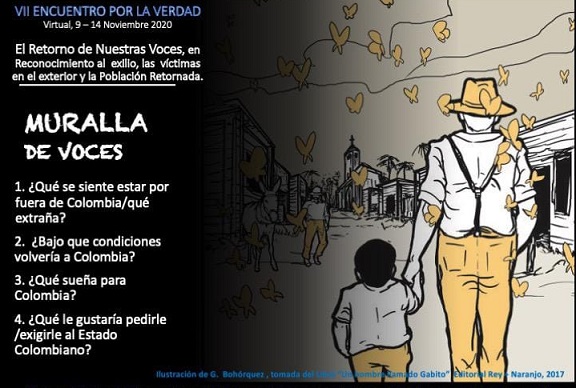 The internal conflict in Colombia has left nearly 300,000 dead, the majority being members of the civilian population. The violence has not been only murders: there have also been kidnappings, disappearances, sexual violence, massacres, recruitment of minors and terrorist attacks.

This conflict continues and there are currently, on an almost daily basis, massacres and murders of political opponents of the government, social leaders, trade union activists, and demobilized FARC guerrillas. This is not to mention the threats, judicial and political persecution of government opponents and journalists who dare to denounce.

Added to this panorama are those displaced by violence and those who had to leave the country due to threats.

With this in mind, the Truth Commission (Comisión de la Verdad)  from Bogotá a few years ago began to coordinate and carry out a series of events called “Encounters for the Truth” (Encuentros por la verdad), which involve support groups  made up of NGOs, exiled Colombians and volunteers in around 23 countries in which exiled Colombians find themselves. All of them have been supporting the work of the Commission in the UK/Ireland since at least 2018.

Its purpose is that in each country, groups supporting the work of the Commission organize parallel cultural events in which exiled people are invited to participate.

Such participation may include speaking about their experience of exile, reading a poem they have written, talking about their hopes for themselves or for the future of Colombia…

The meetings are in line with the key objectives of the Truth Commission and are led by that organization and by Colombians who were forced to leave the country as a result of the internal conflict.

These objectives seek to establish the Truth behind human rights violations and abuses occurred during the conflict; the recognition of this Truth since in a context of impunity the stories of many victims have not been heard or believed, nor has the exile been recognized as one of the impacts of the conflict.

Another objective of the truth commission is to promote co-existence and non-repetition.

According to Peter Drury, representative of the Truth Commission in the UK, what makes this event a truly important platform for exiles and at the same time democratic is that Colombians who were forced to leave the country as a result of the conflict or affected by the conflict (this includes victims, exiled people, people who have returned to Colombia and supporting organizations) can participate in it.

The structure of each meeting is varied because each one has different events.

In this “Seventh meeting: The return of our voices”, the program includes Discussion panels on the following themes: Panel 1: Expectations and realities of the return to Colombia; Panel 2: Women, sexual and gender diversities; Panel 3: The persistence factors of the internal armed conflict that cause exile; Panel 4: International protection and migration policies; Panel 5: The impacts on the second and third generations in exile; Panel 6: Plenary

On the other hand there are Virtual forum discussions, that will take place from November 9 to 12, at 3 pm. (UK time) and in which the Colombian community in exile are invited to attend.

On 13 November is the main public event: the Central act of recognition. This is a space in which support groups in 23 countries are invited to make a short intervention. In the UK this intervention will consist of the “Muralla de Voces” initiative and an open letter to Colombia which includes demands of the Colombian community in the UK and Ireland to the Colombian State. This event will take place from 3 pm. to 6 pm. UK time)

Finally,  a Parallel cultural event in the United Kingdom, will be held on November 14, starting at 2 pm. and will bring together different artistic expressions such as music, dance, theatre and poetry, and there will an open microphone inviting members of the community in the UK /Ireland to share thoughts, poems and experience of exile.

All the events except the cultural event on 14 November are being coordinated from Colombia.

The events will be streamed online and the Commission in Bogotá is coordinating the participation of victims and other people related to the conflict in Colombia in one way or another.

Another activity included in this meeting is called “Wall of voices” (Muralla de voces), an invitation to exiled Colombians to record a short to four questions: What do you miss about Colombia? How do you feel about being outside of Colombia? Under what conditions would you return to Colombia? What are your hopes for Colombia? and What would you like to demand of the Colombian State?

“For many people in exile there is concern that their experience has not been acknowledged in Colombia – those fleeing the country have faced criticism sometimes accused of living luxurious lives when the reality is that exile has meant splitting families; abandoning careers; facing prejudice in the country of exile. This reality is little known in Colombia”, says Drury

That’s why the slogan “Let the voice of Colombia be heard outside of Colombia” (Que se oiga la voz de la Colombia fuera de Colombia) and in this regard Drury adds: “There is little knowledge of the Colombian conflict abroad, the stereotype is that all Colombia’s problems are drugs-related when the reality is that the country has faced decades of internal conflict between guerrilla forces and the State; this conflict has seen large numbers of human rights violations and abuses; millions have been forcibly displaced and many have been forced into exile”.

The “Seventh meeting: The return of our voices” is supported by ABColombia, Rodeemos el Dialogo, Vamos por los derechos, Conciliation Resources and Justice For Colombia, among other organizations.

More information about the event: peter.drury@comisiondelaverdad.co

The Colombian Truth Commission has a key role to play in bringing about the peace envisioned by the 2016 agreement. I hope all those participating in the VII Encuentro por la Verdad will speak their testimonies clearly and with courage, and that the process will be an important step on the road to justice for all those whose human rights have been abused and disregarded during the conflict.

As strong supporters of the Colombian Peace Process we welcome the “VII Encuentro por la Verdad” (VII Encounter for Truth). The importance of uncovering the truth of what happened to victims in the Colombian conflict is essential for creating a strong foundation for sustainable Peace Building.

Truth, Justice and Reconciliation importantly address impunity, enabling the cycle of violence to be broken. The Transitional Justice mechanisms in Colombia provides a forum for both the victims and perpetrators of human rights violations and abuses to tell their story, get a clear picture of the past in order to facilitate genuine healing and reconciliation.

For too long the pain and suffering of victims in the Colombian conflict has been hidden. We acknowledge the pain and fear that forced many Colombians into exile in the UK and hope that this event will enable them to be supported by the Truth Commission to give their testimonies. Thereby, allowing the truth of what happened to them and their families in the Colombian conflict to be heard.

We fully support the work that, the Truth Commission, the Special Jurisdiction for Peace and the Search Unit for the disappeared, are doing to reveal the truth, and address issues of justice, reparation and non-repetition for human rights violations and abuses, to over 8.6 million victims of the Colombian armed conflict.

This legitimate and internationally recognised work is laying a strong foundation for sustainable peace in Colombia.

The Truth Commission does vital work to ensure the Colombian peace agreement is upheld and human rights violations are challenged. This event looks to expand on that work and we’re delighted that the voices of social activists, human rights defenders and trade unionists are being heard.