Guy Debord’s “Society of the spectacle” was first published in France in 1968 and it remains closely associated with the country’s events of that incendiary year. 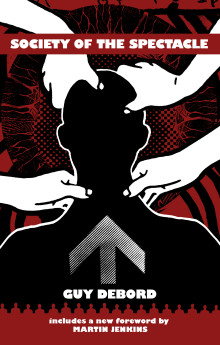 This fails to do justice to its sober analysis of society and, with a new edition just published, it is time to revisit its portrayal of living in a state of what Marx called ‘commodity fetishism’.

There is a misleading view that “Society of the spectacle” is about media saturation and/or Dada-esque rebelliousness. Anselm Jappe, in his intellectual biography “Guy Debord”, debunks this simplification and points instead to the influence of Marx and the Marxist writer Lukács.

The spectacle is a fabricated image of wholeness that distracts attention from our alienation, presenting a One that disguises separation and facilitates passivity.

The spectacle is like a virus, getting inside the body and mind, in fields as diverse as political slogans (‘Make America Great Again’), art forms (mainstream musicals) and faith systems (Buddhism).

Jappe shows that “Society of the spectacle” is indebted to Marx’s account of exchange-value. A commodity’s value is indexed in the economy by its quantity of abstract labour-time – what it costs to produce and consequent rate of profit– although it is fetishized around its utility appeal (use-value) and presented as deriving from the fulfilment of a natural need.

The strife of capitalist competition ensures there are always new products to replace the broken allure of old ones and in this way commodity production imbues the spectacle with a seeming invincibility.

Debord: “The spectacle is the epic poem of this strife – a strife that no fall of Illium can bring to an end”; “The commodity has succeeded in totally colonising social life”.

Jappe perspicuously lays out how the reformation of Marxist concepts informs “Society of the Spectacle”. He weaves into his reading of Debord key ideas from the work of Hegel and Lukács without getting bogged down in academese.

Jappe also presents a context for the book’s fame by way of the Situationalist organization that contributed so much to the poster-and-graffiti exhortations of the 1968 uprising in France.

In this regard, Debord and May 1968 go together like Molotov cocktails and street barricades.

Debord’s book is structured by a numbered set of 221 sections – think of them as lengthy epigrams – with two to six of them occupying each of the less than 150 pages.

This makes it easy to read but without sacrificing analytic and literary impact. At £6, it’s a bargain and, free to watch, is the 1973 video that Debord made based on his book. Jappe’s study, as well as being a reading guide to Debord, serves as a valuable reminder that Debord’s book carries a weighty political message – one in danger of being lost if it is relegated to the reading lists of courses on postmodernism or media theory.

“Society of the spectacle” by Guy Debord is published by Soul Bay Press.

“Guy Debord” by Anselm Jappe is published by PM Press.