Assange is wanted dead. The United Nations, through Nils Melzer, a specialist in torture and ill-treatment, has declared that Assange’s life is at risk. The dilemma offered to him by the Power is not acquittal or conviction; freedom or captivity; the United States or England. It is one of three forms of death: death penalty, forced suicide or burial alive.

The Power wants Assange dead. This has been denounced by people close to him and committed to his cause, such as Yanis Varoufakis, the former Greek economy minister, Stefania Maurizi, the Italian journalist who has defended him from the beginning, and Roger Waters, the Pink Floyd star.

Assange is wanted dead, his mother, his father and his partner say so and repeat it. The United Nations, through Nils Melzer, a specialist in torture and ill-treatment, has declared that Assange’s life is at risk.

The dilemma offered to him by the Power is not acquittal or conviction; freedom or captivity; the United States or England. It is one of three forms of death: death penalty, forced suicide or burial alive. Three, like the Furies, Erinias or Eumenides. The death penalty could be represented by Alecto, the one with snake hair. Forced suicide, by Megera, the one that cries tears of blood. And the burial alive by Typhon, the whip-bearer.

Today Assange celebrates a partial victory. Extradition to the United States, which hung over him like a sword of Damocles, has been denied by a judge in Britain. The outcome of the appeal is pending. Extradition would mean the death penalty for Assange, the maximum and exemplary punishment against those who label him a spy, traitor and enemy of his nation. The United States, which needs to keep its own crimes secret, accuses the man who reveals them of being a criminal.

The British justice system has refused to extradite him on the grounds that Assange could take his own life if he were locked up in one of the harsh US-American prisons.

This is where the shadow of Magera, the Fury of forced suicide, looms.

The verdict is not based on the claim that Assange is innocent. Nor does it recognise that any sentence imposed on him involves demolishing the foundations of freedom of the press. It overlooks the legal absurdity of the United States demanding that England hand over an Australian journalist who revealed military secrets in Afghanistan and Iraq. And it sets a precedent so that any journalist anywhere who reports crimes from any country can be extradited… unless he commits suicide.

In the cruelly childish old game of “Hangman”, a little doll must be drawn, part by part, as the player fails: the arms, legs, head, and eyes and, at the end, the scaffold: a rope around the neck that gives meaning to the game. Assange, tormented, cornered and pushed to the limit of his resistance, would find no other way out than to inflict death on himself. This is what is presupposed. The irony lies in the fact that Justice itself corners, torments and pressures Assange to the point of suicide, and then tries to protect him by preventing him from committing suicide. It washes its hands of him, like Pontius Pilate: We are not going to extradite you, but not because you are innocent, but because you are weak. Similarly, the all-powerful and benevolent British State exempts you from torment because you are prone to depression and prone to suicide. Thus, this avoids the problem without recognizing that the opposite is true: strength on Assange’s part, and fragility of some States [who are] consumed in the dirt of their secrets. 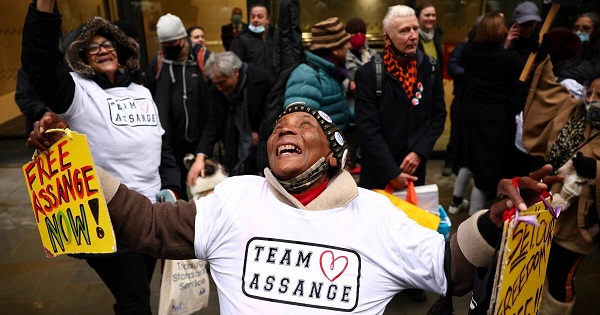 This sets a precedent and it has a history. It is rooted in an ancient form of execution that gave the victim the choice between committing suicide or a worse alternative, such as the death penalty, torture, banishment, dishonour or life imprisonment. Forced suicide: if you don’t kill yourself, we will kill you.

Seen from another angle, suicide was assumed to be an act of defiance, as a defeat of the authority that defeats you: if you don’t leave anything else to burn, you set your own heart on fire. This is the case of Socrates, when, arrested in Athens on the charge of corrupting the youth with his teachings, he ends the farce by drinking hemlock. Seneca, the great Roman tribune, sentenced to death in Rome for his alleged participation in a conspiracy against Nero, cuts his wrists and bleeds to death in a bathtub. Remember Frank Pentangeli in “The Godfather II”? In 1925, Yukio Mishima, a Japanese writer, nostalgically pro-imperial, meets with a small group of samurai after the failure of their insurrection, and following a code of ethics that demands to die with honour before accepting defeat, commits suicide by harakiri, or ritual disembowelling.

This scenario of forced suicide continues to the present day and has become widespread among those who reveal the crimes of the state. In 2010, the US soldier Chelsea Manning, a transgendered soldier and intelligence analyst, discovered evidence of atrocities, torture and massacres committed by the army she served in Afghanistan and Iraq. She did not want to be a bureaucrat who, closing her eyes and limiting herself to carrying out orders, embodying what Hanna Arendt called the banality of evil. Instead, despite the high risk she took, she decided to pass on the material to Wikileaks, Julian Assange’s website. 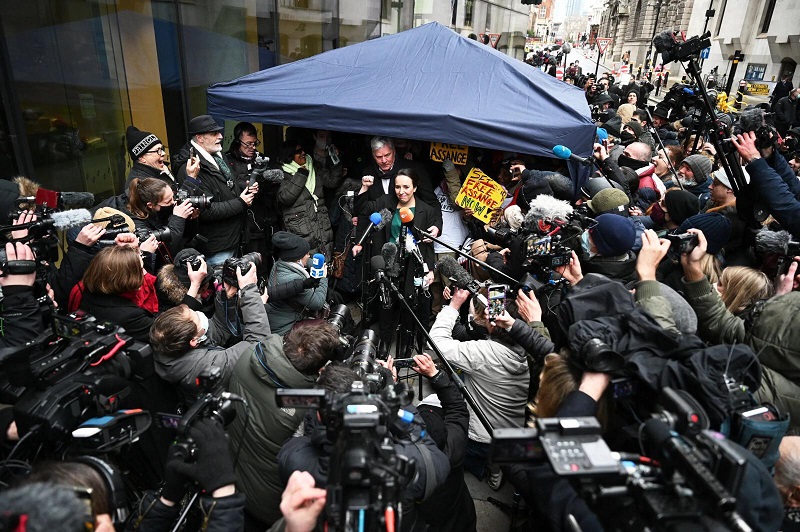 e of the materials she handed over to him was the video now known as Collateral Murder. It shows an episode from 2007, in Baghdad. The personnel of an American Army Apache helicopter enthusiastically massacres twelve Iraqi civilians, as in a video game. Among them were two journalists from the Reuters agency who were walking peacefully down a street, and who they would later try to pass off as terrorists in a typical case of “false positives” (Extrajudicial Executions in Colombia). The other side of that story is significant. Because of this video and similar material, Trump is asking for Assange’s extradition. But later he granted a presidential pardon to the Blackwater mercenaries who were convicted precisely of massacring fourteen civilians in a Baghdad square in 2007. So Trump considers the crime [of murder] committed forgivable but  the act of exposing a similar crime to be worthy of severe punishment.

Discovered for her leaks, Manning was accused of 22 offences and dishonourably discharged. One of her transgressions merits a death sentence: treason against the country by helping the enemy. After a sentence reduced to solitary confinement in a maximum security facility, she was released after seven years, after going on a hunger strike and making two suicide attempts.

In 2013, the US-American programmer and prodigy Aaron Swartz, known as the Son of the Internet, thought it was a miserable attitude not to share knowledge like he had received at elite universities. He was arrested on four counts of computer fraud and attempting to publish private databases. The state increased the initial penalty from $1 million and 35 years in prison to $4 million and 50 years.

Such was the pressure, so overwhelming was the dead end, that Swartz committed suicide by hanging himself from a rope, as in the macabre game of hangman. 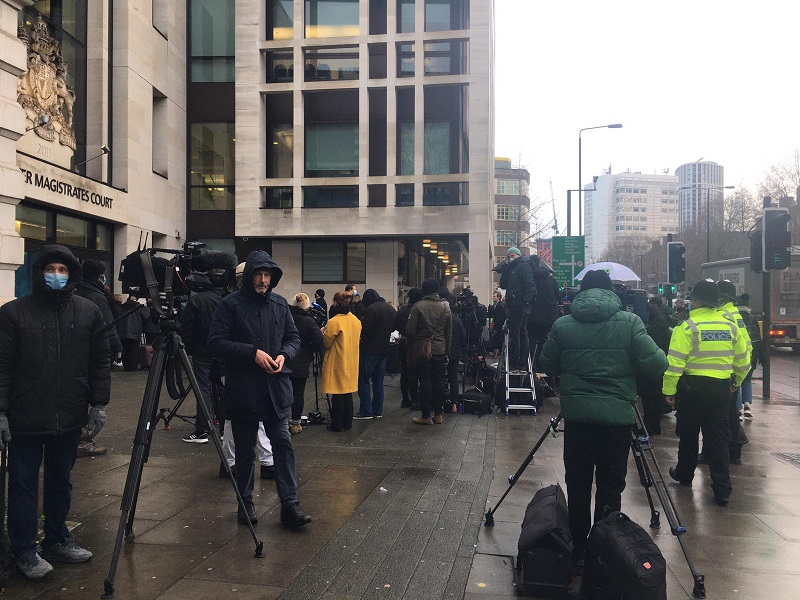 Urged to set an example, and to give a name to an anonymous crowd, British Justice chose as its victim Lauri Love, a young hacker and autistic named none other than Love.

Love had been playing serious data-processing tricks with a computer he kept hidden in a wardrobe in his parents’ house in London, and was arrested on charges of massive theft of official data.

In clear precedent to what has just happened with Assange, England denied his extradition on the mental health grounds that it would lead him to extreme depression and suicide.

Enter now into the scene of Typhoon, the Fury of the Whip and the Burial in Life. The third death. Assange has been exempted from extradition, but denied parole, and remains in Belmarsh prison, the English Guantanamo, where he has been held for the last three years, detained 23 hours a day in solitary confinement and sensory deprivation. In his cell, his fight against Typhon is constant. If he wants to survive, he must keep her at bay. Yanis Varoufakis, who visited him in Belmarsh last June, could see how he resists minute by minute, determined to preserve his integrity and lucidity. “As soon as I let my guard down I lose it”, he told Varoufakis. Pedro Miguel, from the Mexican newspaper La Jornada, knows Assange personally and believes that “nobody is better prepared than he is for the situation he has to face”. 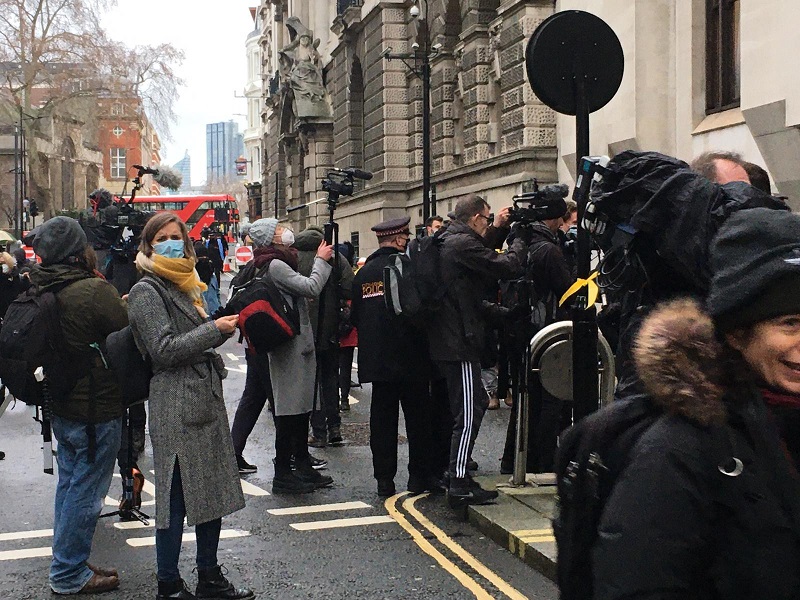 They accuse me of being a demon, a monster. The phrase is from Assange himself. But monster derives from the Latin, monstrare [meaning ‘to demonstrate’]. Monster is the one that shows, and Assange’s ordeal shows us how the Power manipulates Justice.  Any of the three forms of death applied to Assange would be a coup de grace for the freedom of the press. To see him alive, lucid and free is the battle of his vast solidarity network, and of every journalist, researcher, informant, leaker, writer, artist, academic or hacker who believes in the right to inform and be informed. And that revealing the truth cannot be the cause of death.