The LGBTQ+ community are standing in solidarity with migrants who are being oppressed, facing state violence and media attacks. They are utilising their understanding of the struggle for freedom to fight against the Police, Crime, Sentencing and Courts Bill. 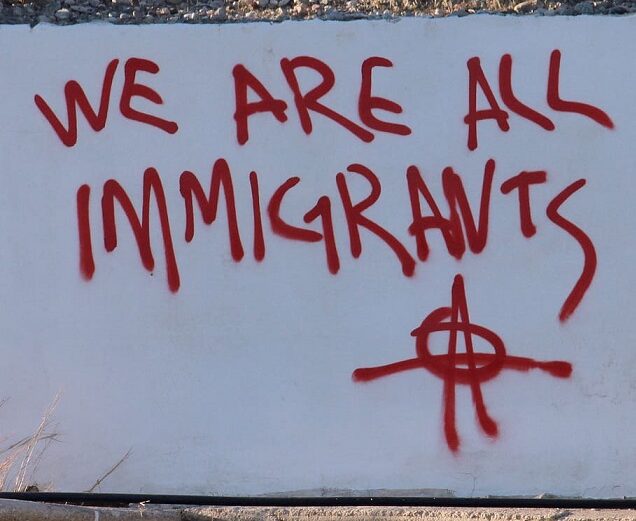 A short time ago, LGBTQIA+ people were deemed ‘illegal’ by the UK government and denied the right to exist openly.

Queer pubs and bars were targeted in police raids and subject to state violence, an inequity that has been passed on to the homes and workplaces of migrants.

The local queer community’s resistance to police raids on the Stonewall Inn in New York, 1969, catalysed the gay liberation movement.

According to LGSMigrants: “In the current political climate, migrants bear the brunt of far-right violence, face demonisation in the media and are criminalised by the state.”

They further state that, “now, it is migrants who are deemed ‘illegal’ by the Home Office, scapegoated by the government and the media as a threat to ‘British values’ and subjected to the ‘basic terror tactic’ of raids”.

Therefore, they argue it is essential to recognise the interconnected nature between their oppression and stand in solidarity with all migrants against raids and the Hostile Environment policy.

LGSMigrants exists as a solidarity group because the history of criminalisation unites queer people with migrants and refugees, and all groups at the sharp end of government oppression. And they assert that they do not exist in mutually exclusive communities as their struggle must be intersectional and coalitional.

In an act of unity, the group has organised “LGSMigrants Learns: Kill the Bill”, as a part of an ongoing conversation series with various migrant and refugee organisations to find out what is happening and how to act in unanimity.

The event via Zoom will be discussing The Police, Crime, Sentencing and Courts Bill and the movement forming to resist it.

The Bill gives police the power to impose severe restrictions on protests if they suspect they will result in serious disruption or distress. It also allows them to set time and noise limits on protests.

In spite of the high-profile coverage of police violence and institutional racism, the Bill is still progressing through Parliament. LGSMigrants say the Bill “is a sweeping attack on everyone’s rights – to protest, to picket, to assemble – but will also give police greater powers to attack already marginalised communities”.

The virtual event, that is open to everyone, will be led by speakers who are going to explain the details of the Bill and discuss the impact on people who are already victims to the police who abuse their power.

One of the speakers is Becka Hudson, a researcher investigating mental health and imprisonment in the UK and in British history. An experienced campaigner, she has worked on many grassroots criminal justice campaigns and is co-founder of Fckboris.

The online event will take place Monday, May 24, 2021 from 6:30 pm. to 7:30 pm. For further information, please visit LGSMigrants website or their Facebook page. To register click here.