On 30 August, South-East London will host an action of solidarity with the families of thousands of young people killed by the Colombian army to pass them off as guerrillas. As this is a genocide, the appeal is universal and different cities around the world will join in.

Between 2002 and 2010 – the years Álvaro Uribe Vélez was president of Colombia – between 4,000 and 6,000 civilians were killed by the government security forces and presented, for the most part, as members of guerrilla groups.

This is documented in a number of studies although some of them indicate that the killings exceeded 10,000.

They were all innocent, poor, unemployed people, who were deceived by the promise of a job. Once they arrived at the promised place, they were killed and then dressed in military clothing, including the characteristic gumboots which they sometimes, by haste, put on backwards.

As highlighted by the website Verdad Ardiente: “No ‘false positive’ happened randomly, it was a cold and calculated strategy to prove that the Colombian state was winning the war against the guerrilla [forces]. This is the main conclusion in the book “Ejecuciones extrajudiciales en Colombia 2002-2010, obediencia ciega en campos de batalla ficticios” (“Extrajudicial executions in Colombia 2002-2010, blind obedience in bogus battle fields”), written by Omar Eduardo Rojas Bolaños, a retired police lieutenant colonel with a degree in sociology who set himself the task of investigating what was behind one of the most heinous criminal practices in the context of armed conflict.” 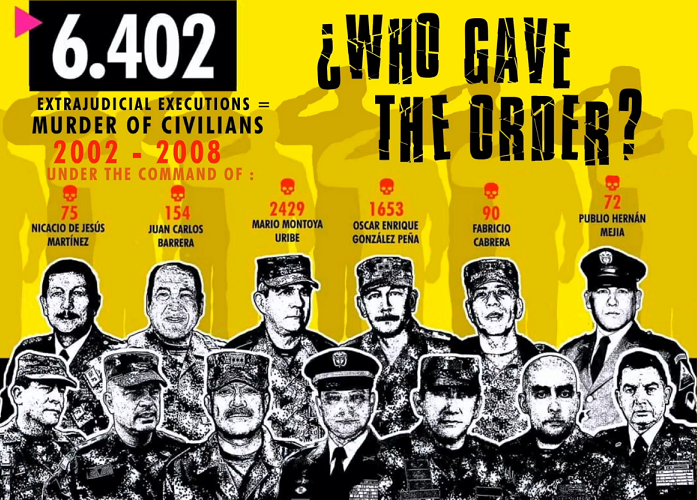 Depending on the body leading the investigation, the actual number of victims has varied. One of them, a product of the peace agreements in Colombia, is the tribunal of the Special Jurisdiction for Peace (SJP) that investigated the scandal involving the state forces and found that “at least 6,402 Colombian men and women were victims of deaths unlawfully presented as combat killings between 2002 and 2008”.

With this horrifying number revealed in the middle of February this year, the families of the victims strengthen their fight to demand for justice to be done because they want to know “Who gave the order”, they want the truth and for the masterminds of these assassinations to be punished. There have been too many years of impunity.

In this respect, following the implementation of various activities in connection with “World Day of victims of enforced disappearance”, 6,402 students from 29 universities in Bogotá (Colombia) have organised for this 30th August a “Performance Act” as a peaceful and silent gesture to pay tribute to the 6,402 innocent young people. 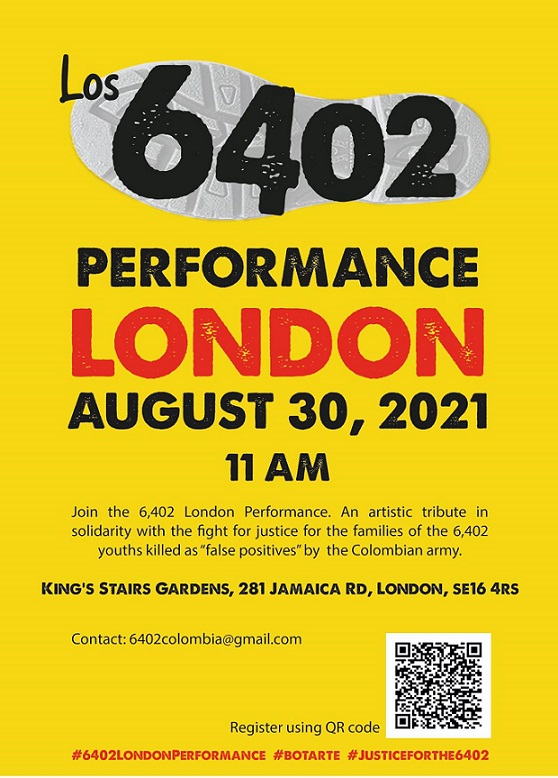 This performance act consists in lying down in Plaza Bolívar, imitating the victims for a few minutes, while they are photographed and filmed by drones flying over them with the aim of making a documentary.

While the performance act is taking place in each of these [cities], the slogan used around the world will be “Never let anything like this happen again”.

The activity in the English capital will combine artistic performances and will take place between the busy Jamaica Road and the Thames River, in King’s Stairs Gardens Park, completely open to the public.

There will be a “London performance act” organised by Mafapo Internacional and, as in Bogotá, the victims will be lying on the ground and will be represented by activists, immigrants and students from various London universities.

The purpose is to raise awareness worldwide of the struggle the families of the 6,402 murdered young people face to obtain justice for the killings known as “False Positives”.

This is how Yonatan Mosquera, member of this organisation, explains it, for whom raising awareness “about this and all the state crimes in Colombia” means mobilising people in any city in the world.

The organisers of the “London performance act” invite “everyone who supports the fight for truth and justices”, especially in the case of the “false positives”. They hope that the British community will show solidarity with the struggle in Colombia and ask the British government to speak out against its Colombian counterpart.