A two hour event at SOAS University campus will take place on 11 March, which will be led, organised and coordinated by young people from the diaspora of the Global South. It will debate the role of youth in changing the paradigm of power at the community, regional, national and international levels. 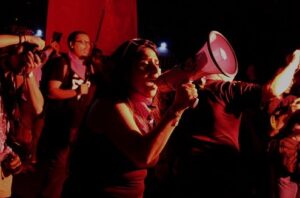 Gabriel Boric’s progressive presidency is a victory for the youth of the Global South, as they see it as the change that will enable the repair of the planet and global justice.

From the Chilean uprisings of 2019 that inspired people across Abya Yala (the so-called Americas) to demand constitutional and systemic change, to the establishment of the Constituent Assembly that overturned the constitution of the fascist Pinochet, Chilean youth have played a central role in Chile’s emergence from neoliberalism to a New Chile, through grassroots people’s power.

However, Boric’s presidency must also be examined critically, as there are many young people in Chile who were politically imprisoned for their participation in the popular demonstrations in the previous government.

Boric’s presidency cannot be taken as a simple individual victory, nor as a full victory say the organisers of “Youth being the change: glocal celebration of Boric’s Presidency”, who assert that the changes in the South American nation have been the product of a “collective effort of the youth, for our ancestors and the next seven generations”. 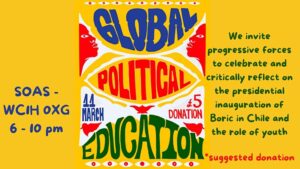 “For too long the challenges and gains of youth have not been taken fully into account   through a perspective of internationalism: with the democratic, political, environmental and rights crises that most of the world faces, young people can no longer look at the global youth movement in a fragmented way. It is time to take ourselves seriously, to take our capacity for change seriously”, says a member of Extinction Rebellion Affinity Youth Network.

She clarifies that it is also important to say that “we do not take the Chilean situation in an idealistic way. The situation in Mexico and the attacks on indigenous rights show us that the electoral gains of the progressive wing do not always mean rights and self-determination for our global families”. 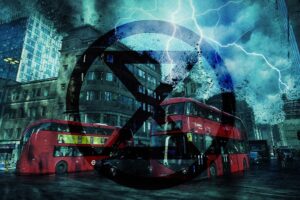 Kobina Jerry, also a member of the Extinction Rebellion Affinity Youth Network, says: “We need to move towards building the type of Global critical engagement that can support the intergenerational efforts that are being spearheaded by young people. Our generation is forced to step up and find different ways of building power. Chile, the question of constitutions, and Global political turmoil mean that there is a lot to compare and learn from elections in Chile and Colombia, to liberation struggles in Ethiopia and Mali.”

With this in mind, the organisers of the event (young people from Chile, Colombia, Trinidad, Ghana and Mauritius) invite progressive forces to celebrate and critically think and reflect on Boric’s presidential inauguration in Chile.

In this sense, they are looking for very specific questions to be discussed at this popular assembly: What are your critical reflections on Boric’s election and the organising process? What can we learn from the situation and its relevance for us? What is the political situation in your territories? What can we do collectively – not abstractly – about it (what actions can we take collectively and glocally)? What is a political prisoner (discussion and appeal to political prisoners globally)? 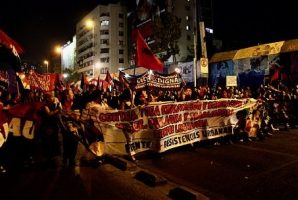 The assembly will be followed by a couple of hours of music from various DJs, dancing and food.