Memory is a trickle of water that peters out, goes the poet, but war it seems is not like memory. In fact, listening to the Ukrainian refugees in Bucharest is further proof of the somersaults people turn to survive. 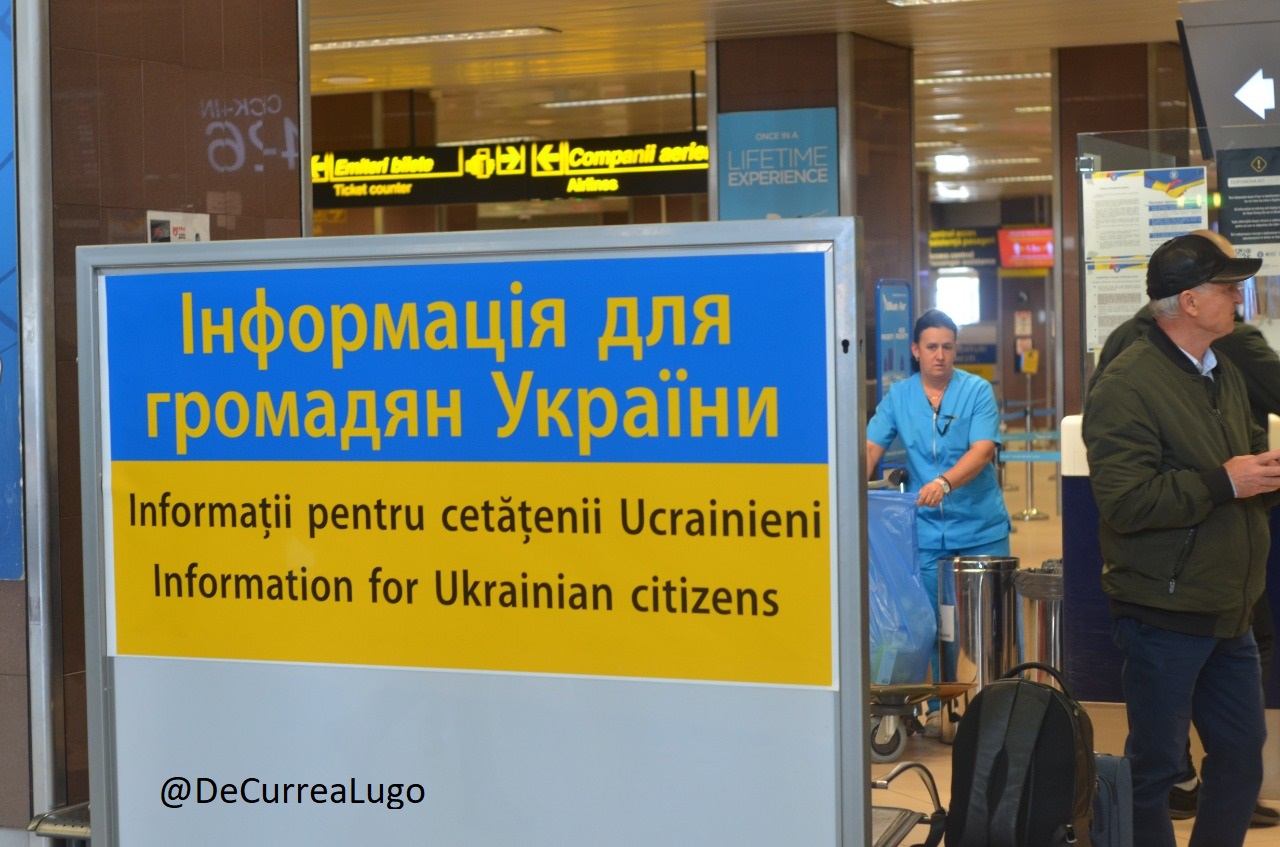 Irina arrives with the spring

At the airport I was surprised by the display of signs, in Russian and Ukrainian, for the refugees. Fewer of them are arriving now, the wave of the first weeks has passed and also, I am told, Romania is better organised to welcome them.

There I found Irina, with her two daughters, one aged four and the other aged seven years old. The younger one pushed her little wheeled suitcase. Her mother tells me that, from the first day, the little girl has taken on that task as her greatest responsibility. Her elder sister is calmer, while the little one tries to devour everything with her eyes.

Irina used to work in an advertising office, as an administrator. She did not want to be photographed. For her, unlike other interviewees, the war was something that could be seen coming. She speaks Russian, that is her mother tongue. She was in Moscow when the war started and she didnâ€™t know how to get back because the whole transport system collapsed.

Flights to Istanbul went up to 3,000 dollars each and many were cancelled. So she got out via Turkmenistan, managed to reach Istanbul where some friends helped her out and now she has managed to leave there.

She is Russian at heart, but she hates Russian politics. She refers to the political debate with a balance of ignorance and contempt. She is tired of only being able to see Russian news. She tells me that before one did not see nationalism as ferocious as what has emerged lately. Her greatest fear, that the war is prolonged until the world forgets about it.

She tells me that, in Russia, Putin is very popular, but she does not understand why. She took part in one of the marches against the war, there were only about 300 people, more police than demonstrators and, a few metres away, more indifferent people than police. The rest, they were drinking coffee, as though the war were a game.

She thinks the muscovites will adapt to this war as they did to the change in the nineties when the Soviet Union ended, as they did in 2008 in the face of the war with Georgia over Abkhasia and South Ossetia. Irina’s daughters do not understand the full scale, she simply and calmly tells them that they lost their home.

I do not remember now how I ended up in a refugee centre called Concordia. This organisation has worked for years with young, vulnerable Romanians and people who live on the streets. It puts on courses, supports poor families and tries to make life easier for a lot of people. But, as Elena, its director, tells me, when the war came they felt they had to do something and do it now (in another article I will tell you more about Concordia). 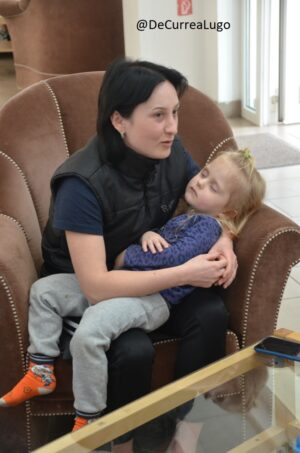 Before being able to speak with some refugees, they tell me that the general feeling is of fear and paranoia. Not everyone is in the mood for interviews. The vast majority are women. They tell me that the men at the border are made to feel that they must not be cowards or betray the fatherland.

Some families arrived with their cats and dogs.

When the war began, both Ukrainians and Romanians remembered the past and their tense relationships with Moscow. That marked them. I had read several experts who talked of Russian arrogance in their spheres of influence, during the imperial period, and of how Georgians and Ukrainians were looked on with a certain disdain. But that is not a thing of the past. It seems that Lenin and Stalin did not destroy that tendency, they just reorganised it. These women confirm it to me now.

My translator, born in Moldova in the Soviet era, learnt Russian due to her parents’ decision; they were convinced that the predominance of all things Russian, even over other Soviet states, determined how far people would go in the professional sphere.

The Romanians were scared that Putin’s occupation would not be limited to Ukraine. Several of the Romanians lack confidence in the anti-aircraft shelters, doubting very much that they are well equipped. That is why they understand and even justify NATO’s current deployment in the border zones, it is like showing our teeth to Putin so that he does not advance, they tell me.

These are two Ukrainian women, from the Zaporiyia area in south-east Ukraine, closer to the Donbas area than to the capital Kyiv, and above Crimea. In their region, they explain to me, Russian is spoken more than Ukrainian; but language was never such a differentiating factor as it is now.

Polina has a lot of Russian friends, but many of them do not believe what she tells them of the war, they tell her that it is all lies, that she believes the tricks of the Western press. At the beginning of the war businesses in her town started to close down.

Lisa, who is 18, tells me that on 24th February they heard explosions in Odessa, where she lived recently, and they all thought they were fireworks. The price of food products started to go up two and even threefold. She only saw the first help a month later.

Polina travelled for several days until she reached Lviv and then Poland. She prepared sandwiches, packed some winter clothing and left along with her mum and her pet dog. She explained to her children that this journey is like an adventure, because the “bad boys” are coming behind them. The children found it hard to learn to keep away from the windows and to sleep just anywhere. 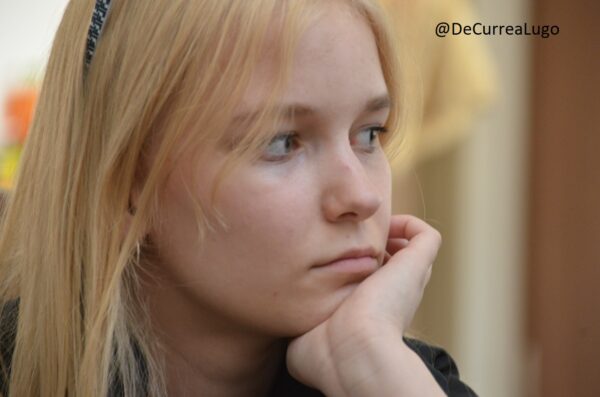 Lisa left with her pregnant sister who lost the baby and is currently in hospital in Bucharest. Every day she writes to her friends who stayed in Odessa to find out how they are. Her best friend, an orphan, carried on living with her grandmother, who brought her up, and who refused to leave her homeland: she cannot move, nor does she want to leave her cats. Several people, on the journey, deleted chats on their mobile phones for fear that their contact with Russian friends would be misinterpreted. It is a clear sign of the fear that overwhelms them.

Concordia has attended to over 700 people in several places. The director is pleasantly surprised by the solidarity of Romanian society. Some refugees are diabetic and it has not been at all easy to obtain insulin. Others have cancer and have been able to continue their treatment thanks to the support of volunteers and health workers. As in any war, nobody knows exactly what will happen tomorrow.

For Irina, the hardest thing was the indifference of muscovites. Polina wanted to experience other countries, apart from Ukraine, but without packing in a rush. And Lisa wants to see her friends again. I take my leave knowing that these women reflect part of the faces of the war. This is not a statistic but a personal story.

I am glad at the solidarity I see and it is no less valuable because the world did not show it in other migrant crises. These women reflect part of human nature: denying the risks, inventing adventures, looking after each other to survive. As we all do. Tomorrow, I continue on my way to the border with Ukraine.

*Article and photos published on the author’s blog.