A cross-border solidarity event, from Europe to the three Americas, recalls the tragic events that marked the National Strike in Colombia and the reality of violence in the country. Its slogan: “Justice for the murdered, freedom for political prisoners, no more false positives”. The date: 28 April in London and elsewhere. 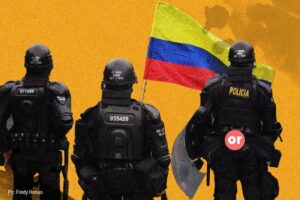 On 28 April 2021, the needs, discontent, weariness, and yearnings of hundreds of thousands of Colombians became a growing mobilisation that is now part of the history of this South American country.

With memories of last year’s protests suspended by the rigours and rules of the pandemic, what was planned for a couple of days was extended by more than two months. Within days of the social outburst, the country’s president, IvAn Duque, was persuaded to withdraw the tax reform, his most ambitious project, but also one of the most criticised of his administration.

The protests were not only about the project. They were also about the lack of conditions for a dignified life, acute unemployment, inequality and inequity, poverty accentuated by the health crisis, extreme difficulties in education and housing and, in general, about a lost future for different generations, especially the youth.

This non-conformism transformed into demands in the streets began to be countered with police violence and, in some cases, with civilians taking up arms. 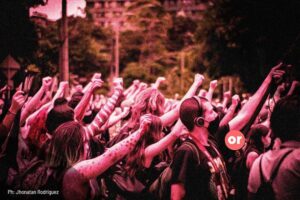 In fact, according to the non-governmental organisation Temblores: “During 2021, we registered a total of 5808 cases of police violence, of which 5048 occurred during the National Strike. Of the total registered, 80 cases correspond to homicidal violence, 47 to sexual violence and 1991 to physical violence. This total also includes other violence”.

These were nightmarish weeks for the protesters, for while there were instances of violence against the uniformed by civilians, the horror unleashed in the name of the law on the protesters, especially the youth, hit rock bottom. For its part, the newspaper El Espectador reported earlier this year that the Office of the United Nations High Commissioner for Human Rights had delivered “the balance of what it found in the national strike of 2021. Between 28 April and 31 July, there were murders, disappearances, illegal detentions, torture, humiliations, and other human rights violations.

The days, against the Duque government’s tax reform, ended in 63 deaths, 60 cases of sexual violence and 27 people who are still missing. These are some of the cases that have advanced in the courts”. 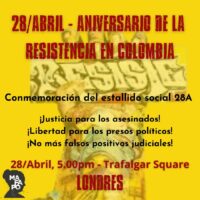 Against this background and with the aim of “keeping alive the memory of the demonstrators and demanding freedom for the political prisoners of the uprising”, the event “28 April, anniversary of the resistance in Colombia” has been called, which is none other than the “Commemoration of the 28th social uprising”.

The call has been made by Mafapo International, a London-based volunteer collective, which supports the Mothers of False Positives of Colombia, Mafapo in “their uncompromising struggle for truth and justice”.

It is a broad, cross-border and transnational call.

That is why so far several cities have joined in: London, Madrid, Vienna, Brussels, Berlin, Valencia, Barcelona, Milan, Florence, Santiago, Melbourne, South Carolina, North Carolina, Houston, Los Angeles, New York and other cities in Europe and the Americas. In Colombia, cities such as PopayÃ¡n, MedellÃ­n, Cali and BogotÃ¡, among others, have joined.

In addition to Mafapo Colombia, which is at the heart of the struggle for the so-called ‘false positives’, the commemoration has been joined by organisations and collectives willing to help: In London there are SOSColombiaUK, IndignadosUK, El Camino, La Minga and others. Although, as Yonatan Mosquera, a member of Mafapo International, says, members of the Free Assange campaign and other groups will also attend. In other countries, different collectives will be supporting according to the local situation. 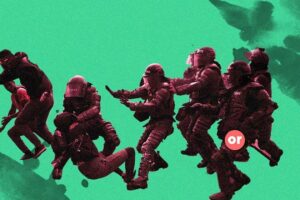 While it is a day for the victims of that 28 April, the event “encompasses all victims of judicial false positives to date; all those who have been killed for protesting, for opposing; all those who are today deprived of their liberty or exiled for expressing their political opposition or demanding their rights”, explains Mosquera.

Activities will include dance, music, poetry, speeches and a free microphone for the audience. This is how it is planned in London, for example, where the idea is to inform English-speaking inhabitants about what is happening in Colombia.

For example, it reports, as established last year by the Special Jurisdiction for Peace, SJP, that the “false positives” amount to 6,402, a tragedy because they were civilians killed by the military forces who passed them off as guerrillas in order to show that their fight against the guerrillas was yielding results. Hence the term ‘false positives’. 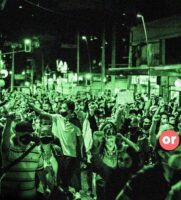 To the above, as Mosquera recalls, “must be added at least 11 civilians massacred by the army in Puerto Leguizamo (Putumayo) on 28 March”.

“The fact that aberrations such as false positives, political prisoners and assassinations of the opposition continue to occur with impunity is evidence that we have not yet won the struggle for truth and justice. That is why we must continue to mobilise, demand and fight,” he says.

He therefore calls on Colombians, wherever they are geographically, to join “the struggle for a better country, a country where our young people can go out to protest and return home safe and sound, where mothers do not have to bury their children simply because the state wants to increase the spoils of war, a country where the slaughter of the innocent is no longer part of daily life”.

Finally, he asks people to get organised and stay connected for the commemoration, through the @MafapoColombia, @MafapoT and @The_Prisma networks.