The back cover of Mahtab Hussain’s “You get me?” is a condensed anthology of headlines from some of Britain’s most awful newspapers. 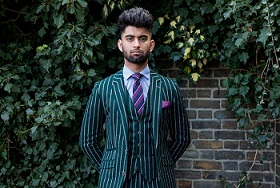 The stereotyping of British Muslims is relentlessly pursued by sections of Britain’s press, partly due to political and social prejudices held by  the newspapers’ owners and partly because it fuels similar prejudices held by the papers’ readership. They sustain each. 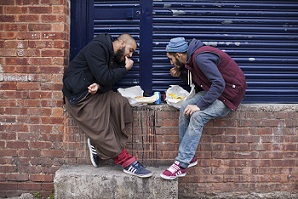 Mahtab Hussain challenges the bigotry and cultural chauvinism that labels Muslims as an other mixture of jihadi-prone extremists, sexual predators and groomers of young white women and hate-filled citizens who refuse to accept British values.

He does so through a series of photographic portraits of young British Muslim men and boys.

They come from a multiplicity of family backgrounds: Bangladesh, Pakistan, of Uganda, Iraq, and Somalia. The subjects know they are being photographed and adopt poses their own choosing. The shots are not taken in a studio but in situ: on the street, in a garden, a living room or a gym. 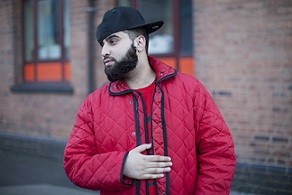 What comes across in the portraits is prefigured in a quotation from Nathaniel Hawthorne on the first page of the book: No one, he says, “for any considerable period, can wear one face to himself and another to the multitude, without finally getting bewildered as to which may be the true”.

Young Muslim males in Britain are subject to contrary pressures from family, friends, schooling, the media and their own thoughts and feelings.

Conflicted, they struggle to find an identity that can satisfy other people’s expectations and their own sense of who they are in the process of becoming.

This suggests angst-ridden souls but Hussain’s work reveals self-assurance, self-awareness and a keen sense of dignity possessed by those he photographs. This comes across strongly in their body language and style of dress. 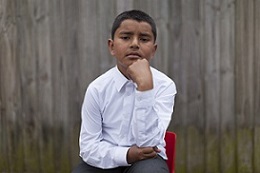 Some take up a neutral pose and question not themselves but the viewer; others assert their self-possession by staring non-committally into the camera; a young man mocks the stereotype by seeming to direct a rifle at the viewer; a youngster waves a small flag of Pakistan; two men are happy to be shown eating Britain’s quintessential take-away.

Styles of dress are as varied as the individuals, ranging from a startling green chalk-stripe suit to a Bart Simpson T-shirt.

One man shoulders a shemagh, another prefers a shell suit; teenagers and young men wear hoodies and fashionable jackets. One white-vested, eyebrow-tracked guy likes his baseball cap worn US-style, back to front. 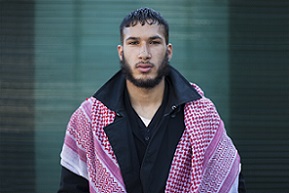 Some of the young men find an identity in masculinity; others are more relaxed about the image they present to an often hostile society. It will be interesting to see if Hussain addresses British female Muslims in a future project.

“You get me?” by Mahtab Hussain is published by MACK