The idea of a mural has been around for a long time for the members of Latin American House and the very structure they live in seems to invite them to intervene artistically and open another door to the community for which they were created and for which they work. A crowdfunding campaign has been launched. 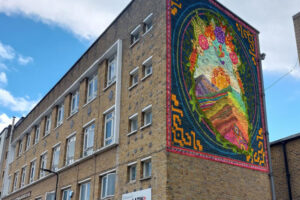 When Gisella Stapleton was approached to paint a mural that would unite all of Latin America and become an inspiring space for immigrant communities, she didn’t think twice.

A visual artist, children’s educator and Latin American immigrant, she arrived in London from Peru in 2011 and has been working for several years on issues and projects that empower communities, especially underage children and women. Her visual language is made up of colours, symbolism and nature itself, and with it she expresses the subject matter of her work, “from ecofeminism to indigenous identity and the preservation of nature”.

Perhaps because of these characteristics, the mural soon took on shape in her imagination. She thought of a heart because “all of us who are abroad carry our homeland in our hearts”. 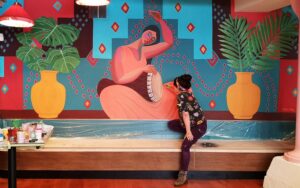 And to create a kind of frontier-free people, she thought of including in the heart natural regions that go beyond borders and elements of our biodiversity: mountains that go from north to south in South America, the tropical/Amazonian zones of our continent, corn as the basic food of many regions, the hummingbird that inhabits America from south to north and is a symbol in many cultures.

“I also thought it was important to include artistic elements, especially traditional textiles from our communities, so you can see the typical embroidered flowers from the centre, details of Quechua, Aymara, Mapuche, Guaraní, Mayan, Chibcha and Ashaninka looms, among others,” explains Gisella.

She put all this to Naomi Zaragoza, Communities and Cultures coordinator at Latin American House, a department created at the beginning of 2022 and dedicated to “linking, collaborating and producing cultural and artistic experiences with and for Latin American communities”. 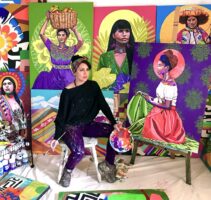 Naomi explains that the priority this year is to complete “a high impact community project that will help us connect with our local community, improve the look of our street, work with local talent and strengthen Latin American House’s position on the cultural map of London. The opportunity to make this mural arose from conversations with Camden Future High Streets and Spacehive regarding their Crowdfunding campaigns and we made the decision to take the plunge and give it a go”.

Awareness from a mural

There are many studies on the community impact of public art. Murals are open, accessible and democratic pieces of art, they communicate social messages, they inspire and their presence influences the quality of life of the people who live and work in the public space.

This is how Naomi understands it, for whom in the case of the Latin American House mural, “the message has to do with spreading and celebrating Latin American biodiversity, an issue that all human beings regardless of our gender, age or ethnicity are or should be sensitive to, particularly in the context of climate change”. 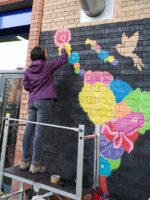 It will be almost impossible for it not to have a message not to be sent, as it is a mural of large dimensions: about 40 square metres belonging to one of the walls of the building and on which there will be colourful elements of Latin American flora and fauna, which will not be able to go unnoticed.

“We hope that members of the Latin American Community will find familiar elements that they can identify with and remind them of their countries when they visit us, and that people from other cultures will learn more about our natural heritage,” says Naomi.

The making of the mural will be accompanied by community activities: a workshop for children (in which they will paint a set of flower pots that will form part of the garden outside the building), placing art stencils on the ground to guide people from Kilburn High Street to the Community Centre, a short documentary about the process of the mural’s creation, and a community street party to unveil the mural. All this will be possible if the funds are raised between June and July. If so, in August the mural will be painted and the activities that accompany the process will begin.