Mauricio Rico used to sell shoes in his native country. When he arrived in London he dived into the food business. He started with washing up, he then began to move up and he became a head chef. Today he has his own Mexican food business where he serves “the best of us” to the British. 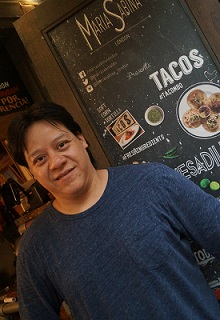 For the next 10 minutes, Mauricio Rico is going to tell his life’s story without raising his eyes from the tacos, quesadillas, sauces and other dishes, giving off delicious aromas while being cooked in a saucepan.

Don’t misunderstand it. Mauricio is kind, smiles and welcomes everyone like they were at home. The only thing is that being installed in Pop Brixton and almost reaching lunchtime, he cannot neglect any detail in his business.

“I arrived in London because the situation in Mexico was a little bit difficult. A friend of mine was already living here” he explains.

“I studied Communication in Mexico. I was working for a telephone company as an instructor in the customer service area. I was fine in my job, but suddenly there was a staff cutback. At that time I broke my Achilles tendon, I was disabled and I was part of the cutback due to low productivity” he remembers.

He decided to open his own business with the severance pay money. “I had a friend who had a shoe factory in Guadalajara; I used to bring wholesale shoes from there to Mexico City. But there was no money, the economy was really bad and shoes were the only thing I had to eat” he says jokingly. 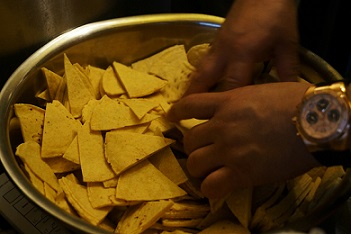 Mauricio was 28 years old when he decided to come to England. “My plan was to come to study English; to see what the situation was like here. A friend of mine came first and started to tell me that things were good here. We are going to study; we are going to make it, he told me. The plan was to start a business together”.

Unluckily, his friend’s girlfriend couldn’t pass immigration in London; for that reason his business partner came back just two days after Mauricio’s arrival. “I stayed; I said: I am going to keep studying and see what happens” he remembers.

With a very low level of English still, he started washing up plates in a Mexican restaurant. “Step by step they started to promote me until I became the second person in charge. Then, when they opened another restaurant in Covent Garden, they hired me as head chef”.

With a grandmother who was a cook and part of his family working in cafés, Mauricio knew the food business. A couple who were his friends offered Mauricio to be part of the business in Brixton after they realized the restaurant in Covent Garden would close. “We came to an agreement and I came here to help and try to make the business grow” he explains. 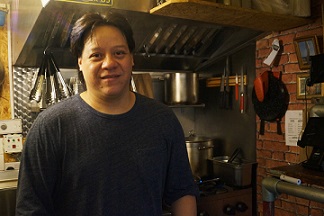 Mauricio is feeling at ease. He is confident that in summer –when it is less rainy– a lot of people come. He sees himself living at this part of the ocean for many years despite the fact he doesn’t have family in Europe.

“The truth is that I no longer think about going back. The situation, my age, everything…it is like you feel more comfortable here. Maybe going to retire there, but the situation in Mexico is very difficult at the moment”, he maintains.

In his opinion, contrary to the kitchen, there are no magical recipes to adapt you to life in the United Kingdom. “In London you do have to adapt to the English laws and the culture, which are different from ours. We are more relaxed. You have to adapt and bring part of your culture, but without shouting it from the hills or imposing yourself”, he explains. “That is what we try to do by cooking, to bring the best of us”.