In “Maritza la fugitiva”, Eliécer Pardo enters into a time and place that raise a generous and open staging and scene so that the question of Fate is almost an enormous paradox from which pain and cruelty have not managed to remove the mystery that contains all destiny, all life. 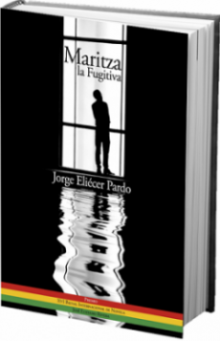 I do not know if I will ever know whether we are born to our fate, to our sheer luck, or if on the contrary fate has some cards in store for us that sooner or later will be dealt as it decrees. Neither do I know if there is a middle ground in which we can slightly change direction to mange at least add another bend in the road, in a turnaround qualified by Schopenhauer when he states: “Fate shuffles the cards and we play”.

Be that as it may, every novel, every fiction that chooses the terrain of literature and not of history on which to build itself, ends up debating, before that monumental mirror, about the value of precept or accident that Fate may have when it becomes our history under the microscope: life. Our life. Nothing less.

In “Maritza la fugitiva” (Maritza the fugitive), winning novel of the XVI International Novel Biennial José Eustasio Rivera award, 2018), Jorge Eliécer Pardo enters into a time and place that raise a generous and open staging and scene so that the question of Fate is almost an enormous paradox from which pain and cruelty have not managed to remove the mystery that contains all destiny, all life.

The history of Latin America during the last fifty years of the 20th century is the common ground on which we can find many women and men of our generation, and from Colombia to Uruguay, Chile, Brazil, Argentina, Bolivia or Venezuela, our destiny has been awash with times built from cruelty, torture, death, dictatorships and the loss of essential freedoms, in a kind of sinister struggle for inequality.

Those of us who have survived, and need to recount it, sometimes seek in these artefacts (novels, tales, poems, songs…) a logic that confirms that at least we are the ones who play the cards, even if we have not dealt them. It also confirms that although it often appears that we may have lost the game, many, such as Jorge Eliécer Pardo, show through their work the desire to continue playing it, because the game has not yet ended.

“Maritza the fugitive” is the terrain Pardo has chosen on which to build this grand stage where he invites us to enter and live through more than five decades of history of the 20th century, in Colombia, but not only there.

The novel begins with the image of the twin towers in flames, after the attack, and the memory of the narrator, Federico Bernal, of the explosion in 1989 of Avianca’s Boeing 727, where he (the great-grandson of Saúl Aguirre) should have been, but because of those tricks of fate, does not board. And Maritza, granddaughter of Madam Laurine, arrived in Colombia in 1920 to flee a Europe destroyed by the Great War.

That common space, Colombia (but it could also be Uruguay, Argentina, Chile …), laboratory of destiny, tries to relate while at the same time making us protagonists and spectators of our dervish dance, we turn without stopping and at the same time we try to look at ourselves same, as if we were looking for the key to stopping in the movement itself.

“Maritza the fugitive”, rooted in its farthest past, as well as in its closest dreams of youth, in Borges, in Cortázar and in María Kodama, and also in John Lennon and Yoko Ono; and Jorge Eliécer Pardo, playing with different narrators, times, objects and with an extraordinary ability to turn and turn and make us turn with him almost without realising it, allows us to read the tragedy, distancing ourselves from it just enough so that the pain does not blind us, so that nostalgia does not silence us, and so that Fate, which we cannot seem to escape, manages to tie us up and leave us immobile before ourselves.

“Maritza la Fugitiva” is an ambitious novel that achieves its mission, if I am allowed to conjecture about it in a very synthetic way: to be able to look at ourselves without guilt or accusations, and to be delighted with a fresco that is sometimes “Goyaesque”, sometimes “Velazquian” and sometimes “Daliesque”, which can turn us into better readers and better subjects of our own destiny.