An elderly man, the baron of the book’s title, returns to his native Hungary from Buenos Aires. Somehow –for amongst other things this is a book about fake news– a story about the baron being exceedingly rich gathers credibility.

It is said that he will generously spread his wealth around his shabby home town and preparations are made for an official welcoming party when he arrives there by train.

The baron has written to his childhood love, who never left the town where they grew up, asking to see her once again.

The woman is now well into her sixties and can hardly remember him but, now divorced and disappointed with men, the letter stirs up her dormant capacity for romance and she becomes part of the elaborate reception ceremony at the railway station.

There is palpable excitement as the train carrying the baron arrives. Everyone has turned out to catch a glimpse of this plutocrat who will transform all their lives. He is heralded as a monetized messiah. 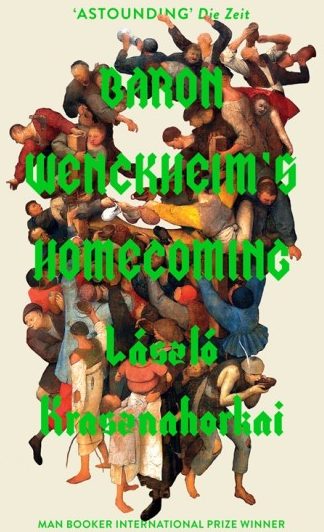 A decorated, four-horse carriage is waiting for him and the local fascist-minded, motorbike gang also turn out in force to greet him.

The motorbike gang feature in a sub-plot that involves a retired professor who has become a hermit on the outskirts of the town.

This world-famous botanist is suffering an intellectual crisis, having lost all belief in empirical science, and he seeks to immunize himself from thinking as a radical solution to his epistemological loss of faith.

The professor restricts his thinking to a meagre two hours a day, from 3-5pm, philosophizing to himself about the mathematics of Cantor and multiple infinities.

Science, he has concluded, can only handle what is finite and he regards fear, of life and  of death, as a vital explanation for the sad plight of humanity.

There emerges a telling similitude between the professor’s Nietzschean musings and the Baron’s realisation that his coming home offered only an illusion of finding some meaning to his life.

Both characters reach a terminal point in their awareness of the lunacy of existence; they cannot fathom why they have to exist. Marika, the Baron’s childhood love, joins them in examining what their separate decades of living have taught them.

This may all seem like a bleak and miserable read but it is nothing of the sort. The book is in many ways an uplifting comedy and although the story has a contemporary setting – there are smartphones and refugees to remind us that this is our world – the sentences unfold in such a languidly eloquent way as to seem quite old-fashioned.

This style of writing  is deceptive, masking an unsentimental presentation of the shabbiness of so many people’s lives. Self-interest, stupidity and shamelessness are everywhere and if you can’t laugh at it you’ll spend too much time crying over it. László Krasznahoraki wants us to do both.