GFI has produced a report analyzing the shocking loss of wealth occurring through just one trade mechanism: invoice mispricing. Some of the highest levels of missing tax revenues affect the smallest countries. Effective international co-operation is needed for countries to grapple with sophisticated globalized tax avoidance and wealth concealment.

The papers are wall-to-wall covered with Coronavirus news but that does not mean that other crucial issues should slip by un-noticed, or deliberately withheld because “today is a good day to bury bad news” as one of Blair’s spin advisors said on Sept. 11th 2001.

Global Financial Integrity has released a report that opens a window on one of the ways in which the globalized economy now deprives millions of people in both developed and developing countries of the added value that their labour creates – and effectively puts it into the hands of the rich.

There are many ways this can be done during trade transactions and this report deals with just one: -invoice mispricing.

This is the process in which according to the GFI report “traders deliberately falsify the stated prices on invoices for goods they are importing and exporting as a way to illicitly transfer value across international borders…”. It may be done to evade taxes, launder money, avoid currency controls or hide profits offshore.

It is not the same thing as transfer mispricing, which has also been estimated to divert vast sums of money onto a conveyor belt carrying wealth to those at the top of the global pyramid – another $1.1 Trillion between 2005 – 2007 alone, just for imports into the EU and US, according to Christian Aid. 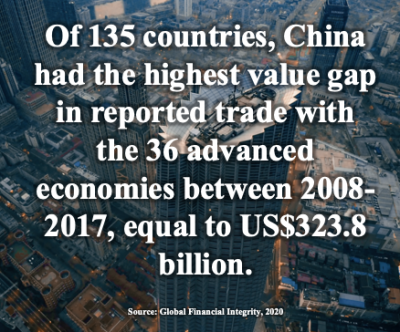 These activities have been known about for some time, but this is the first attempt to quantify the sums involved. It has been done by carrying out a value-gap analysis, using data from the United Nations Comtrade database.

By identifying data for matched bilateral trade between specific pairs of countries, and filtering out unmatched trade, a set of figures has been derived for the missing millions in reported trades.

Thus, if country A records exports to country B worth $10 million while country B records imports from country A during the same period worth only $7 million, it is clear that $3 million has gone missing without permission. The report admits that the figures cannot be perfectly precise although the methods used are rigorous, but they do give a good idea of the scale of the problem.

What is missing is a means of apportioning the gap in value between the two partners. All we can say is that the tax revenues of both countries have suffered, and the extent to which this affects each country will also depend on the tax and tariff rates applied in each country. 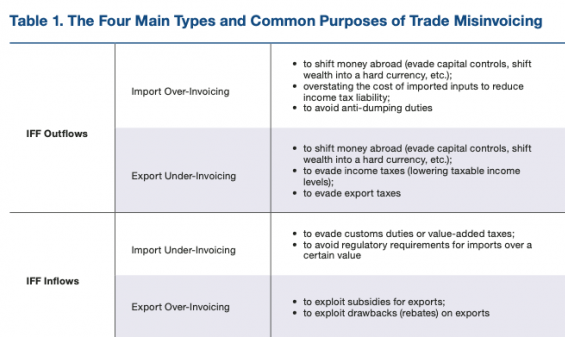 It is interesting that among both sets of five island countries appear three times:

The Maldives and the Seychelles once, and the Bahamas twice. In this second set Paraguay is the only Latin American country, with a 27.1% gap in trade with all partners during this 10-year period, while for 2017 Bolivia appears with 23.8%.

The average size of the gap is about 20% for trade between developing and advanced countries, and the same for trade when both partners are developing countries. Another general observation is that in terms of percentage gaps, it is the smallest countries which have the largest figures. China has the largest total figure but as a percentage it is only 18.8% of its total trade.

There are four types of mispricing aimed at different outcomes.

Import over-pricing benefits those who want to move money out of their country or avoid income tax, while under-pricing imports reduces customs dues and VAT.

On the other hand over-pricing exports allows the firm to take advantage of export subsidies or rebates which may form part of their government’s policy initiatives aimed at developing the country for the benefit of all. Finally, export under-invoicing meets the same goals as import over-pricing.

Given the large sums involved, it suggests that trading partners my even be chosen with a view to tailoring the mutual gains that are possible – another way by which a country’s economy is distorted to benefit those in key positions.

Thus, the value gap between the countries of the Middle East and North Africa (MENA) trading with those of Sub-Saharan Africa was 28.6%, while the gap between both the latter regions and Western hemisphere developing countries was only in the range of 14-15%.

The report doesn’t explain this, and it clearly isn’t a simple question of distance because the Asian countries have large gaps with all trading partner regions. Maybe it suggests that the biggest illicit advantages accrue to those countries with common languages and close contacts that may facilitate a choice of the goods to exchange for mutual benefit.

Despite the impossibility of assigning benefits separately to each member of a pair of trading countries, GFI researchers have also gained insights from discussions with businesses and government officials, and they believe that the primary motives for mispricing in developing countries are capital flight and tax evasion. Moving money into the hard currencies of the advanced world makes it less vulnerable to inflation and fluctuations in exchange rates, and interestingly getting wealth out of the country means that it cannot be confiscated by corrupt officials – one form of corruption to beat another.

This is the ‘push factor’, while the ‘pull factor’ is tax avoidance, and it is the advanced countries that are to blame here, because they are the ones that offer a sophisticated network of offshore tax-havens, shell companies, and anonymous accounts where cash can be made to disappear. 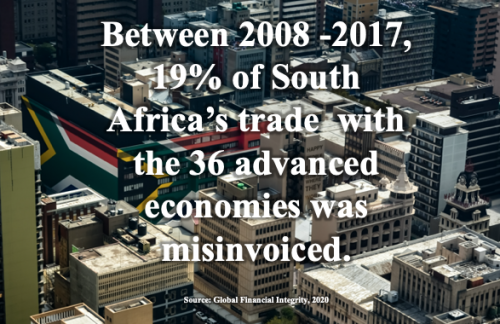 This situation recalls that described in Africa by Tom Burgis “The looting machine” (2015), which led him to point out (p.73), that the famous slogan of the 1776 US Revolution: ‘No Taxation without Representation’, also works in reverse in these situations. If only the rich are funding the government – and its cronies – then the people’s needs can safely be ignored.

Something which the advanced countries may also discover as they move towards Universal Basic Income.

What is to be done?

In this age of advanced capitalism, technology has clearly outrun the law, and corrupt politicians have every motive to keep things that way, but the result is an extractive machine that removes the value added by workforces in the developing world, and puts it to work again in the financialized economies of the so-called advanced world.

GFI has developed a tool called GFTrade, which allows customs officials to assess whether the price stated on a commodity being imported is reasonable in relation to world prices.

They also recommend in line with the World Customs Organization (WCO), that customs authorities are given the resources and integrated with fiscal and law-enforcement agencies to act across the board, rather than focusing just on import under-pricing.

In addition, there needs to be more international co-operation between tax and customs authorities, and better country-by-country reporting to stop transfer mispricing as well. Finally, more transparency is required to reveal the true beneficial owners of trading companies and offshore trusts.

It may be that Coronavirus will provoke long-term changes in the world economy and we can be sure that there are many in positions of power and knowledge who will seek to solidify their control over the wealth of nations if they are not resisted.