In November 1985, the Palace of Justice in Colombia went up in flames. The then-guerrilla group, M-19, had taken over its facilities and, after confronting the government and military forces, tragedy erupted. The result was almost 100 dead people, with several tortured or disappeared. Eleven cafeteria workers never imagined that it was going to be the last time that they would see their families. Today the truth remains hidden.

Pilar Navarrete is the wife of Héctor Jaime Beltrán Fuentes, one of those who disappeared in the take over and retaking of the Palace of Justice on 6 and 7 November 1985.

“Jimmi”, as he was usually called, was 28 years old when he disappeared. He was working as a waiter in the cafeteria of the Palace of Justice. The two of them were parents to four daughters aged 5, 3 and a half, 2 and a half, and 7 months old.

It has been 35 years since then, but Pilar can remember every detail.

For her, everything started a month before. “I used to meet my husband in the cafeteria, and we would go and buy something to eat for our daughters, and then return together”, she shared. However, several members of the guerrilla association, M-19, which demobilised in 1990, were arrested with blueprints of the palace. Therefore, her husband advised her not to go there because security had been stepped up and he feared that the place would be occupied.

Furthermore, on Friday 3 November, the police withdrew from the Palace of Justice, which allowed M19 to enter.

Pilar tells how, hours before the events, her husband asked for a photo of their daughters to show to a member of congress who was going to help them find an apartment the following day.

“He was always losing photos and I jokingly made him swear an oath, with one hand on his heart and the other one raised, that if he lost the photo he wouldn’t return, so that he would take it seriously, and bring the photo back,” she said.

But the next day, the take over and retaking of the Palace of Justice happened, and he didn’t return.

“Many people say, and it is proven, that they knew what was going to happen”, she says. According to her, M19 wanted to put pressure on the Colombian State to demand that they reopen peace talks and grant a list of requests that they were carrying in a document.

That 6 November, Jimmi left for work from his home in Soacha, one hour away.

Pilar was going to call him at 11:30 am to tell him about their second daughter’s enrolment at school. “It had to be that time because the hard work started after that and he wouldn’t be able to answer me”.

Her husband had a broken finger, but he had promised to work to be able to enrol his daughter and be able to take a break.

“I called him around 11:20 am and the phone line was engaged. I tried him again 15 minutes later, but to no avail”, she remembers. 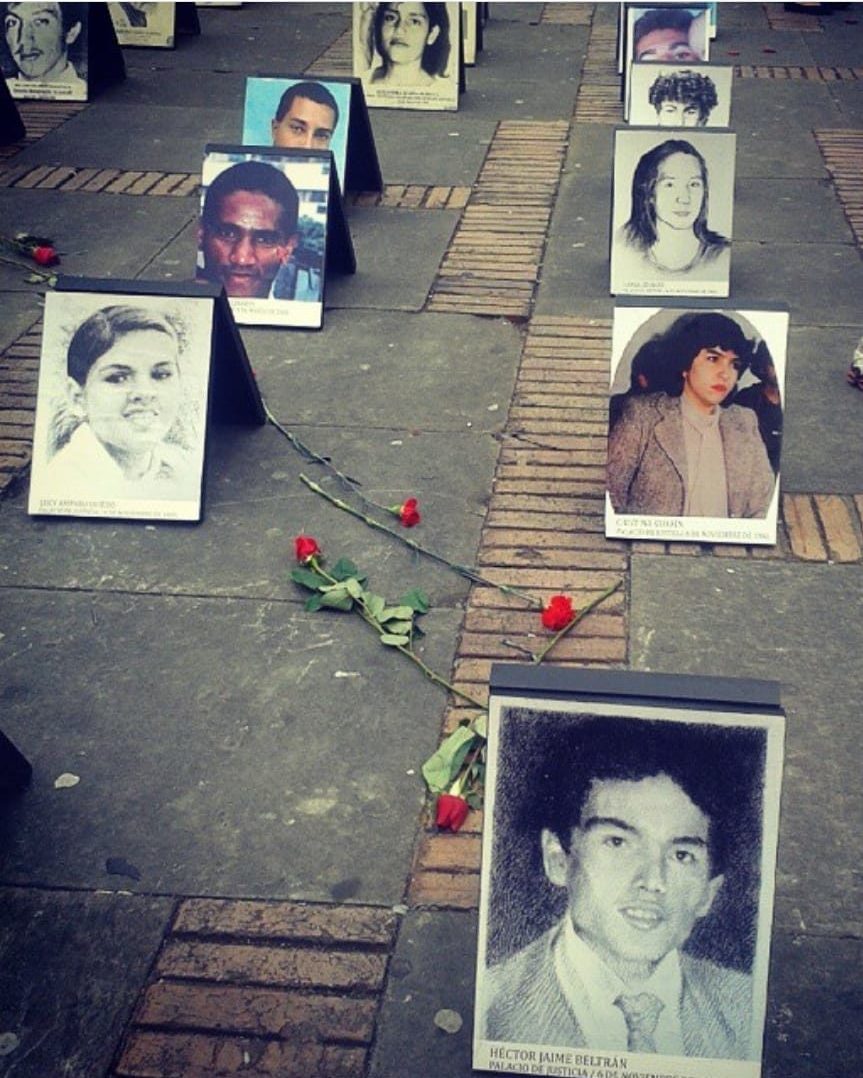 She gave up and started getting her eldest daughter ready to go to school.

However, around midday, a neighbour told her to put the radio or television on, because M19 had taken the Palace of Justice and the army’s response had been swift.

“We knew that the army kept its war tanks an hour away, but it had responded in barely 15 minutes with the tanks firing,” she explains.

The situation lasted for 27 hours, in which Pilar and her in-laws listened to the radio together and contacted people nearby for news.

“Noemi Sanin, the minister of communications at the time, didn’t broadcast what was happening, instead she put on a football match,” she tells.

As her husband’s brother, Mario Beltrán, was a guard at the Administrative Department of Security and took care of a diplomat, he approached the Palace of Justice to see what was happening, so that he could inform Pilar and their relatives of the events and reassure them that the cafeteria had not burnt down.

After the 27 hours elapsed, Mario rang Pilar and said: “Come, because my brother has had to flee for his life: I found his ID document and his jacket at the entrance to the cafeteria and everything here is in perfect order”.

When they arrived, they had already begun to remove incinerated bodies. First, they went to Legal Medicine, but they did not let them in until the following day when there were more bodies.

“All the remains and bodies were washed by the firefighters on army and police orders” Pilar said. 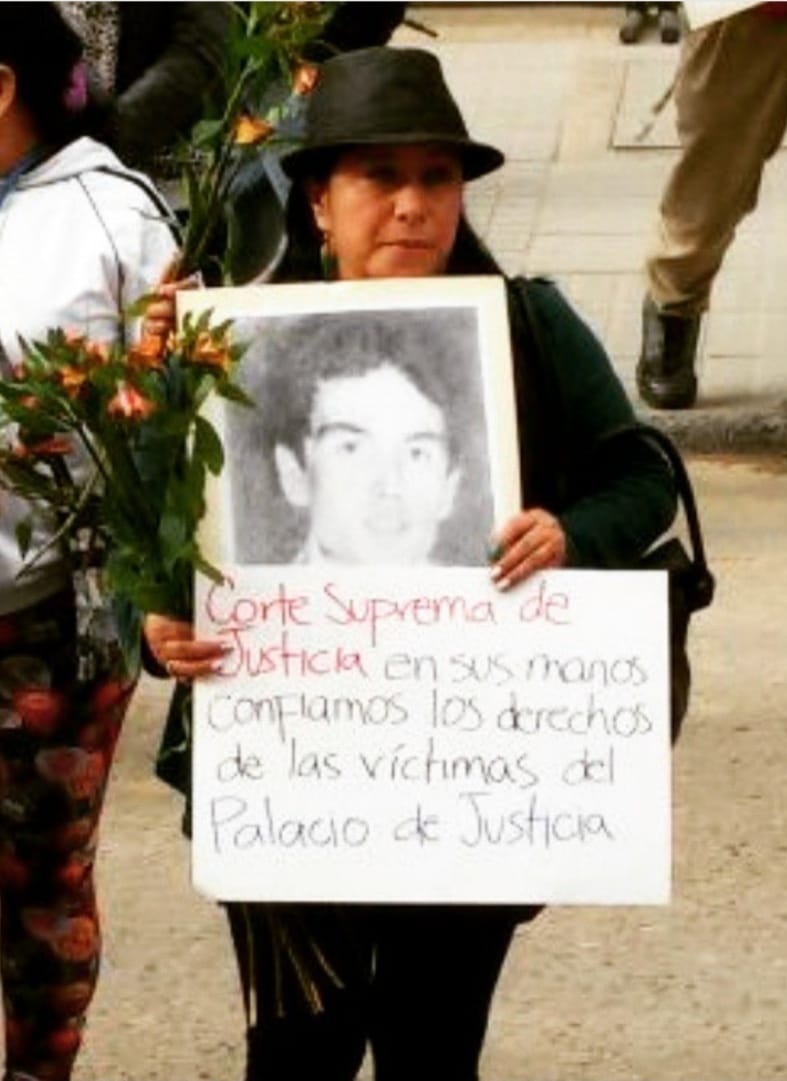 There were approximately 99 dead and 11 disappeared. That moment started the endless identification attempts and years of waiting.

They visited the Institute of Legal Medicine every day for a week, trying to make an identification through dentures, clothing or anything that there was, without success.

They also received a call where she was told that her husband was being held prisoner, however, they couldn’t manage to find out anything.

Then they started visiting hospitals and places that they thought he might be.

With the passing days, the faces of the relatives of the missing began to repeat themselves at military stations, in the hospitals, and at the door to the Institute of Legal Medicine…

It was there that they realised all of the missing were cafeteria workers and some families had also received a phone call telling them that their relative was alive. “Through leaks, we found out that almost all the disappeared that had left alive had been taken to make a statement in the Flower Vase House building, next to the Palace of Justice”.

This place has always been a museum. Pilar tells how they took the survivors there to interrogate them and verify whether they had anything to do with the guerrillas or not, and if they were suspects.

(Next week: Pilar Navarrete: Disappearance, torture, and execution of an innocent (II))