I have lived in London for six years, and it is without doubt that this pandemic has given rise to the strangest period in all of this time. Although I long for the freedom to travel, I look to make the most of this time, studying through books, documentaries and podcasts. And like many, I am scared and unsure. 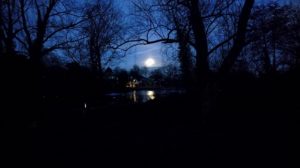 I arrived in London in 2014 to work for The Prisma and now I want to share my experiences of these weeks in lock-down.

I have been on demonstrations to defend human rights, I have lived in seven different homes and I have met people from more than 20 countries, many of whom have left London, but with some, I continue to maintain a close friendship.

The fact of living with different cultures and exploring the diversity that makes up the British capital is part of London’s beauty.

Multiculturalism impregnates the British capital’s streets, where the museums are scattered over the length of the territory, the lush parks contrast with the frenzy of the centre and the palpable differences between areas are both clear and striking.

An example of this is that from the Alternative Rock scene that inhabits Camden Town to the pleasant peacefulness that Primrose Hill possesses, is barely a ten minute walk.

But all of this has temporarily evaporated, I find it strange not to go out to the parks, especially in springtime, when the temperature rises and the amount of hours of daylight grows each day.

I miss the trips to the Tate Modern, the walks with friends to Covent Garden, the eternal revelry of Camden Town or the races to the hill on Hampstead Heath.

Precisely, when the lock-down was announced, one of my intentions was to try to take advantage of extra time through a type of home schooling, in Spanish and in English, where I would learn about history, politics, philosophy or literature.

The time, that before I would spend in travelling to work, now I would invest in knowledge. I do it from my home in Kentish Town, an area where the literary roots were implanted by illustrious neighbours such as George Orwell, Mary Shelley or Karl Marx.

Of course, this is simply the story of someone who takes advantage of their resources to try to overcome this dramatic episode in our lives.

I live in an acceptably sized space, with a garden surrounded by trees where I have created a sanctuary to write, read and listen. This literary romance has made my personal situation considerably positive in comparison with less fortunate people. 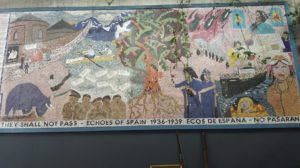 But I come to terms with my fragility and as the weeks pass, the monotony and the impossibility to be with my loved ones, make a crack in my highly optimistic spirit.

Because whilst I see the sun rise above the small houses that surround my home, there is a fear, growing bit by bit, in my interior. I fear that spring will finish and we will carry on alone. And that, from our homes, we will impotently observe how the warm summer months melt away like a quick breeze, invisible and imperceptible.

We stay in our homes with the security that each time we are closer to a return to walks holding hands, to laugh lying down in the forest, to bathe on the beach or climb mountains. We are humans and we long for each other.

Hours before the official lock-down began in Spain, my native country, whilst I walked in Hampstead Heath, I spoke on the phone with my parents and my sister. They were at home and now they wouldn’t be going out. It was in the afternoon of Friday the 13th of March and winter was fading,

The conversation turned to the Coronavirus, the pandemic that was devastating Spain and was arriving in the United Kingdom. 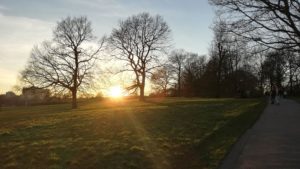 There, the police were guarding the streets to make sure that no one broke the lock-down. In contrast with this reality, from my London home I observed groups of more than three, four and five people outside, all crowded together in tight spaces. Sometimes, keeping a safe distance seems to be a utopia.