After a long and very painful battle with cancer, Fiona passed away at 2.15 am on Saturday May 16, with her sister Sheila and niece Eleni holding her hand.  Fiona was born in Edgware in North London, to an English father and a Scottish mother, and was an extraordinary person and will be in the memory of those who knew her very closely or those who knew her very little. Fiona collaborated with The Prisma for several weeks, long enough to know that she deserves a space in our memory. Two mutual friends, and very close to her, have written this biographical piece. 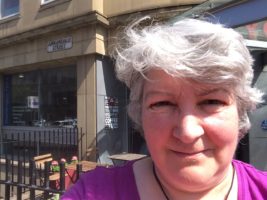 Myself and Corinne knew Fiona for around fifteen to twenty years, meeting her first in her studded leather jacket and punk-rock hairstyle.

She joined our housegroup for about ten years, during which time she became our lodger for four years.

More recently, Fiona became my researcher in Antigua and Jamaica, and was a key team member of the Lifeline Expedition in Haiti, which I also researched.

At one particularly disastrous conference and exhibition, Fiona’s assertiveness was an absolute asset as she took charge of the bookstall and display pretty much single-handed. 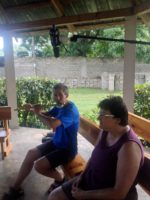 We ourselves had a lively and warm relationship with Fiona. We were there for each other. For me (Corinne) it was like having another daughter to care for and love. Fiona also holidayed with us in Scilly, as well as in the West Country.

Fiona was a paradox, perhaps even to herself. Fiercely loyal to those whose vision she believed in, deeply angry and (at times) obsessively focussed to her own detriment on those she believed were being unduly authoritarian (rather than authoritative).

Fiona undoubtedly did not live up her own expectations, or those of many others. She was hugely gifted, but also hugely damaged, perhaps mostly from the past, but which haunted her into the present as an always on-going struggle and battle.

Fiona had an especial fury towards what she saw as official incompetence and bureaucratic bungling, and she may well have been right, particularly where rules became more important than compassion. 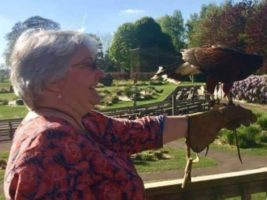 ay from these battles, Fiona joined in others, with positive social and spiritual outcomes.

She was intensely loyal to the visions that she supported, and (in appropriate contexts) her ‘right from the shoulder’ style worked well. In my own work, Fiona was the most loyal and constant of supporters.

Travelling all over the Caribbean for myself and David Pott, she was fiercely committed in support all the issues regarding slavery and its effects.

Together with myself, and especially with Andy Lawrence, Fiona was a loyal supporter of the archaeological work we carried out over several years, and which was itself connected to the Moravian mission, and slavery in the Caribbean. 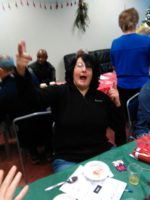 All the damage and anger from the past was translated and channeled into fighting injustice, abuse and oppression.

Whether this was sexual abuse and prostitution, drugs, and the modern-day effects of slavery (themselves all related), Fiona was rightly angry, and fought them with her might.

Like all of us (we do well to remember!), Fiona had her failings; but the Lord will say, “Well done, good and faithful servant!”

In everything, Fiona’s faithfulness to her spiritual vision never wavered, even in the face of what might be best understood as mighty hostile spiritual forces and a cosmic conflict bigger than any of us can imagine or understand.

This is the lesson for us, as we remember Fiona.