She knows that there is much to do in this multicultural district with many immigrant communities including from Latin America. She knows the Council must work to understand their dilemmas, problems, barriers and challenges. She wants a community that is treated with respect, that is heard, that speaks and makes decisions. Her concern? The impact of Brexit on the national economy and the ability to harness the power and talent of UK-nationals and Europeans.

This is the most diverse borough in London with 53% of residents born outside the UK. There are over 100 languages spoken here, and it is also the youngest local authority in the country: 38% of its residents are under the age of 24. During the past five years, it has reduced unemployment by 50%, but still, the average wage has only grown by half of that in the rest of London. Moreover, it is also dealing with job insecurity and wage stagnation.

Rokhsana Fiaz, the Mayor of Newham is the first female Mayor directly elected in London. She won the elections in 2018 with 73.4% of the total votes, and she is now working to economically and socially improve the borough of Newham, which has an annual budget of £1.5 billion.

One of the main issues she is dealing with is climate change, for which she declared a climate emergency.

But she also faces another big problem: Newham also has the highest rates of health inequality, and according to Public Health England (PHE), every year 96 people die as a consequence of polluted air. As a response, they are now switching to sustainable public transport. As a result of a decade of austerity, the financial support to councils has been cut by 60% which had a devastating impact on councils such as Newham. It caused a housing crisis and increased poverty, which are two of the main areas of work of the Mayor.

At the same time, it has a strategic position to lead the industrial future of London, and within the next ten years it will be home to 30% of London’s population creating a housing demand and creating more jobs.

Rokhsana Fiaz talked about this and other topics recently in a local press conference titled: “Mayor’s reception for Ethnic media print and broadcast journalists”.

It was the first time that the borough of Newham has hosted an event of this kind, and the Mayor hopes it was the beginning of a series of conversations with the press. She also wants to open the Council’s doors to all the residents, by organising events and exhibitions. 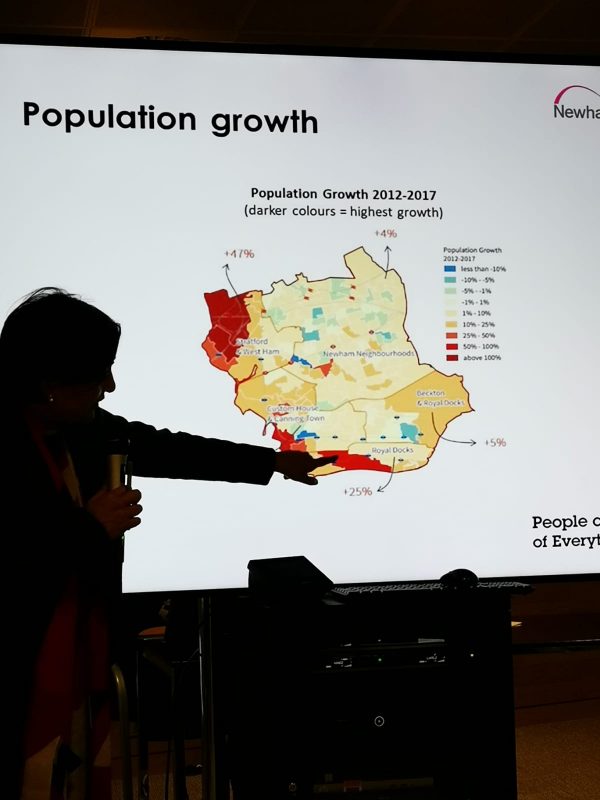 Rokhsana Fiaz spoke to The Prisma in more detail, about the Latin American community in Newham, and the future of this multicultural borough after Brexit.

How is the Latin American community involved in Newham?

What we have done, since I stepped into office, is beginning to open up the council, creating forums through citizen assemblies, reaching out to a whole variety of communities through our neighbourhood centres and involving them in a whole range of decision-making.

So, as a first step, we’ve delegated £25,000 to the local neighbourhood resident groups, and, through citizens assembly, they can determine how they want to spend that money. I know that we have a lot more to do, because we have communities that are very diverse, such as the Latin American community, which is not homogeneous: it is made up of multiple beautiful countries of origin and heritage, and we need to do much more work in understanding their dilemmas and their challenges.

Before I stepped into office, the council wasn’t particularly great in terms of outreach and it was quite orthodox in its approach. It would view our residents as one monolithic block. We cannot engage with our residents in that way, because people have come from different parts of the world; they may have English language barriers, and they may have a whole series of issues that are particular to that community and that may impede them from accessing jobs or from accessing our services.

How do you plan to improve that?

I want to get to a point where, regardless of where your country of origin or heritage is, we have a council operation and service mechanism in which, at every point of interface with the council, people are treated with respect, that they can really understand what we offer, and that they are appropriately and effectively guided to where to get help if we’re not able to provide a particular service.

In recent years in the summer, we have this joyous Latin American festival for the Latin American Community. It’s largely located in the West Ham area 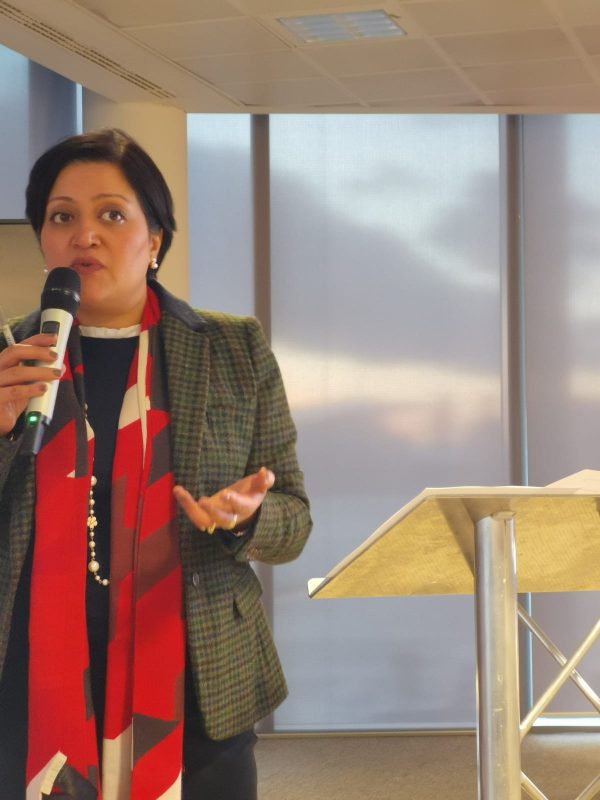 of Newham, but also in parts of East Ham South. We still have a lot more work to do in terms of outreach, but as I was saying, it wasn’t done in such an explicit and intentional way under the previous mayor. But, because I’m an internationalist, because I respect and embrace diversity and interculturalism, and because we live in the most diverse borough in the country it’s absolutely incumbent on me.

Newham is one of the most diverse boroughs in London, what makes people choose it as their new home?

I think there’s something about East London, historically, which has always been a focus or locus of different migrant communities to come to Newham. My parents came from Pakistan, back in 1960, before then it was the Jewish community. So we have this really interesting history, in the east in particular, but London generally, of inviting different people from different parts of the world.

I think what makes Newham particularly appealing is that there’s not just one dominant ethnic group, and also that we’re changing. I also recognize that we can’t take our diversity for granted, we’ve got to actively and proactively work in ensuring that we’re providing opportunities for people to come together and not be kept apart. And also to understand our commonalities as humans and that the challenges that someone may experience are going to be the same challenges that I experienced, and we’ve got to tackle it together. 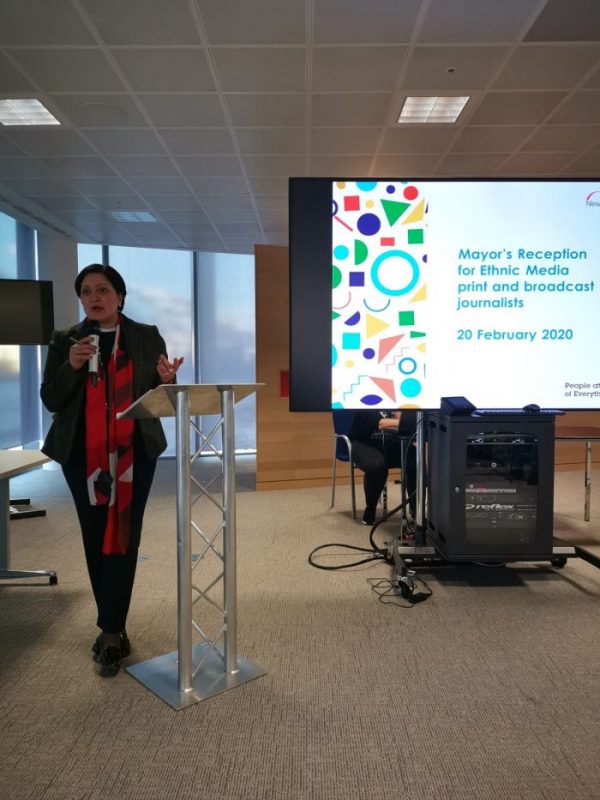 What are the biggest challenges that Newham is going to face, now that Brexit is happening?

It’s going to be very similar to other local authorities, but particularly in London in the South East how do we contend with the impact of Brexit uncertainty? Even though Brexit is done we are still waiting for the terms of Brexit and what that means, the potential implications for the UK economy and what that poses in terms of economic risk. We’re making huge amounts of investment in terms of housing and we’re borrowing £2.5 billion pounds.

We have to make sure that we’re doing it in a measured and balanced way, that we’re not exposing ourselves too much if that uncertainty turns into a serious problem. But actually, it’s about how we contend, as a local authority – the ninth-largest UK local authority, that’s always been challenged during 10 years of austerity – where local government across England has seen a reduction of 60% of the money coming from the central government, but we still have a burgeoning population.

We still need people to help run the public services, we still need workers to support our provision of adult social care or for teaching young people, and those people that are entrepreneurs and bring innovation to help drive our local economy.

So, my concern would be the impact of Brexit, not only on the UK economy but actually how that will impact our ability to really leverage the power and talent of our people and people that come from Europe.

(Photos by Nathan Raia / The Prisma)