The James Joyce Foundation in Zurich is deservedly well known to devotees of the writer and one large room there is filled from floor to ceiling with over five thousand books: not just various editions and translations of Joyce’s work but bibliographies, biographies, monographs, literary criticism, dissertations, essays and reference books. The term “Joyce industry” has been coined. 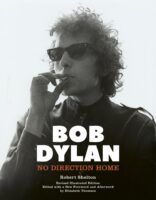 There is also a Bob Dylan industry, a more literal one than the Joyce counterpart.

The singer and songwriter reportedly sold his music catalogue a year ago to Universal Music Publishing Group for US$300 million; there is constant streaming of his work and a steady churning out of books about the man and his music.

Dylan’s 80th birthday this year has seen another slew of books, like Robert Shelton’s “Bob Dylan no direction home”, an abridged version of the 1986 classic written by the journalist who helped catapult into fame an unknown young man.

Shelton’s A4-sized book is a biography written by an insider and he covers the important milestones up to the 1990s: the Minnesota backwater, the equivalent of a provincial town in a Chekov play, where Dylan was born and raised; the leaving home (not “because of my curiosity to see what was going on elsewhere. I just wanted to get away. Yeah, get away”; the seismic influence of discovering Woody Guthrie; the arrival in New York in 1961…

The text is driven by who said what to whom and when; the more than 150 images are a bonus.

Paul Morley’s “You lose yourself, you reappear: Bob Dylan and the voices of a lifetime” is ruminative, charting the changes in the musical persona of the troubadour whose first voice, as David Bowie put it, sounded as if made of “sand and glue”.

Morley listens to all the voices up to and including the 39th album, “Rough and rowdy ways” released in June of this year.

Morley has some interesting observations along the way but trying to pin down the chameleon-like Dylan is doomed to failure and perhaps this explains why the book meanders around itself.

But Morley knows his subject will forever remain elusive and his task is a thankless one.

No one is going to get rich by translating Joyce into Basque or Uzbek (the Joyce Foundation in Zurich has copies) but there is a market for Dylan and this oils the wheel of an industry that is alive and well.