You don’t have to like professional tennis to know that dictatorships like China silence those who speak out of turn and you don’t need a Ph.D. in political science to know that some “democracies” have their own way of pursuing a similar objective.

The UK has allowed Julian Assange’s extradition to the US, a country where the chief witness against him has admitted perjury and whose intelligence service considered assassinating him.

It is now more important than ever to hear what Assange has been saying to the world and a new book helps make this possible.

In WikiLeaks, one of the 13 sections in “Julian Assange in his own words”, the philosophy and methodology of the organization he founded, to publicize classified media provided by anonymous sources, is succinctly summarized.

He observes how some politicians single him and his staff out “while saying nothing about the slaughter of thousands by the U.S. military or other dictatorships”. The acid irony, of course, is that WikiLeaks famously revealed an instance of such slaughter when it released film showing 11 innocent people being insouciantly mowed down from an Apache helicopter in Iraq. 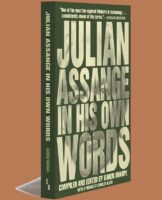 An earlier section in this indispensable collection -with the source for every quotation meticulously documented, spells out what Assange stands for:

“We are free press activists. It’s not about saving the whales. It’s about giving people the information they need to support whaling or not support whaling. Why? That is the raw ingredient that is needed to make a just and civil society and without that we’re just sailing in the dark.”

Assange speaks of not being able to escape the sound of suffering and the ethical obligation to do something about it is what sustains his commitment:

“If we can only live once, then let it be a daring adventure that draws on all our powers. Let it be with similar types whose hearts and heads we may be proud of.”

“An American mindset is being fostered and spread to the rest of the world because they find this mindset to be uncontroversial among themselves. That is literally a type of digital colonialism.”

“Only by approaching this corpus [the U.S. State Department cables] holistically -over and above the documentation of each individual abuse, each localized atrocity- does the true human cost of empire heave into view.”

“We are creating a space behind us that permits a form of journalism which lives up to the name that journalism has always tried to establish for itself.”

After one year in the Ecuadorian embassy in London, Assange said in a statement: “Edward Snowden is one of us. [Chelsea] Manning is one of us.”

“I am unbroken, albeit literally surrounded by murderers, but the days when I could read and speak and organize to defend myself, my ideals, and my people are over until I am free! Everyone else must take my place.”

The renowned journalist Charles Glass, in the introduction to “Julian Assange in his own words”, reminds readers that while Assange has been silenced for the moment “his words live on. As reminder, as inspiration, as exhortation”. The battle to free him will continue in the UK and, if necessary, in the US.

“Julian Assange in his own words” compiled and edited by Karen Sharpe, is published by Or Books.