Five years after the death of Fidel Castro, Stephen Wilkinson explains his role during the Cuban Revolution, the influence of Jose Marti, the suicide of Eduardo Chibas as a catalyst for social change and the coup d’etat led by Fulgencio Batista.

“Fidel Castro was motivated to fulfil the ideals of Jose Marti”, notes Stephen Wilkinson, Lecturer in Politics and International Relations at the University of Buckingham.

During his conversation with The Prisma analyses Cuba’s history and discusses the ideals of Jose Marti, how they were used by both Castro’s followers and the Batista regime to legitimise their respective causes. He also discusses the role of Cuba during the Cold War and its complex relation with the Soviet Union, and the current geopolitical situation of Cuba.

The Chairman of the International Institute for the Study of Cuba and Editor of the International Journal of Cuban Studies points that “the Revolution of 1959 was an unfinished job that has to be done.” The relation of forces seemed ripe for the inception of a social movement. Aside from the great inequalities that existed in Cuba in the 1940s, defined by Wilkinson as “a prototype of the current neoliberal societies”, the role of the Orthodox Party (Partido Ortodoxo), from which Fidel Castro was a member, was fundamental for the uprising.

This political party was “based on the desire to fulfil the dreams of Jose Marti”. Its founder, Eduardo Chibas, was a popular politician who had a radio show which he used to spread the ideas of  Marti and to criticise the political and social situation in Cuba. 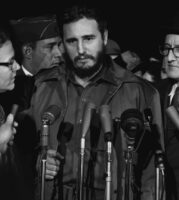 During a radio show in 1951, Chibas shoot himself, and his eventual death some days later became the catalyst for the following events. “It was a grand gesture, and after his death, the Orthodox Party increased in popularity.”

Fearing a victory of the Orthodox Party in the elections of 1952, Fulgencio Batista staged a coup d’etat, Castro tried to sue him in the Supreme Court, “but the judges were too afraid of Batista, so they threw the case out.” Unable to solve the problem by legal means, Castro and his followers attacked the Moncada Barracks, a military garrison in Santiago de Cuba on the 26th of July of 1953.

Although the offensive failed and many of Castro’s supporters were tortured and killed, the flame of social change had already been ignited. As Wilkinson puts it, “that was the beginning of the Revolution of 1959”.

The Revolution of 1959 was a watershed moment in Cuban history. What was its origin?

The Cuban Revolution was an unfinished job that had to be done, and it is important to place it in the context of what happened before. In other words, the revolution in 1933 and the events in the late 19th century.

When Cuba was about to defeat Spain in 1898 and obtain their independence, the United States intervened in the war and occupied Cuba’s military. They did not leave the country for 4 years, and only did so when Cuba accepted a constitution that was really written for them by the North Americans.

In 1902, Cuba became a Republic, and yet, it did not achieve a real independence as it was always under some kind of control by the United States. Then, the US business developed in the island. Even though Cuba was not a US colony, they always had control of it. In other words, the Cuban people were never completely free from external domination.

This explains why there is a Guantanamo prison, as this was part of this settlement of 1902 which was imposed in Cuba.

The current difficulties between the two nations are a legacy of that, because the United States think that Cuba belongs to them.

How was the situation in Cuba during the first half of the 20th century?

In the 1940s, Cuba was a very inequal society. There was a vast amount of wealth attained by very few people, whereas large numbers of citizens had very little and lived in very bad conditions.

The situation was not very dissimilar to the current societies in which we are living today.

In a way, Cuba was a prototype of the modern neoliberal countries. Its economy was very privatised and the social welfare was scarce. People relied on precarious employment, there were few jobs and the sugar industry was seasonal.

When did this situation start to change?

In 1947, Eduardo Chibas founded the Orthodox Party, based on the desire to fulfil the dreams of Jose Marti. It was an anticorruption party defined explicitly by its slogan: “Shame against money” (Verguenza contra el dinero). Moreover, Chibas was a famous politician, had a radio show and used it to spread his political ideas.

The people in Cuba began to support the Orthodox Party in large numbers, and it participated in the campaign for the elections of 1952.

During his radio programme in 1951, Chibas made a speech defined by himself as his “last aldabonazo” (“Ultimo Aldabonazo”). He exposed that it was the last chance to overthrow tyranny, and then he shot himself in the show. He bled and died in the hospital some days later.

It was a grand gesture, and after his death, the Orthodox Party increased in popularity. It seemed that it would win the elections. Then, in order to prevent its victory, Fulgencio Batista staged the coup d’etat. 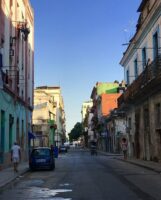 What was the role of Fidel Castro in that process?

Fidel Castro was a nationalist from an upper middle-class family, but with a high-level of social consciousness. He was motivated by the 19th century nationalist independence hero, Jose Marti, who was the organiser of the first revolutionary independence party in Cuba.

As a poet, journalist and writer, Marti left a great intellectual and social legacy. He established a dimension of social responsibility to emphasise that people must be able to live a dignified live.

Fidel Castro was motivated to fulfil the ideals of Jose Marti, to make Cuba really independent to set its own path, and create an egalitarian society.

For that reason, he joined the Orthodox Party, and became candidate for Parliament for congress in the elections of 1952.

After Batista’s coup, Castro tried to sue him in the Supreme Court. But the judges were too afraid of Batista, so they threw the case out.

When he failed to overthrow Batista by legal means, he started to organise a revolutionary movement. The first act was to attack the Moncada Barracks, a military garrison in Santiago de Cuba on the 26th of July of 1953.

How important was 1953 for the development of the history of Cuba?

It was the beginning of the 1959 Revolution. Paradoxically, 1953 was the centenary of Jose Marti, and there were many celebrations around the country. A giant statue of him was built by the Batista regime and it was put in the now called Revolution Square in Habana. The dictator wanted to use the cloak of  Marti to legitimise the dictatorship.

Before the attack in the Moncada Barracks, Castro and his followers wrote a manifesto in which there were many references to Marti.

One of the points was that Batista and his supporters were using the symbol of Marti in order to keep themselves in power, and in doing so, they were dishonouring his legacy.

The manifesto mentioned that they were the centenary generation, the people who were going to honour the legacy of Jose Marti.

The whole kind of ideology of Castro’s movement was around Marti and that current of thought was continued through the whole of the Revolutionary period.

And even nowadays it is very strong. Every school in Cuba has a bust of  Martí in the doors. He is still a driver of the Cuban Revolution.

And within this framework, the 26th of July Movement was formed.

Eventually, the attack failed and many of Castro’s followers were tortured, Fidel Castro escaped and was put on trial. In his defence, he made a speech that was later know as, “History will absolve me” (La historia me absolvera).

This became a foundational document for the 26th of July Movement, which made Castro very popular in Cuba. He was able to coalesce the very diverse range of social classes in one movement to bring the transformation of the country.