Juning’s four children had to stay on the island Bantayan in the Philippines when the family employing her as a domestic servant first moved from Manila to Hong Kong. 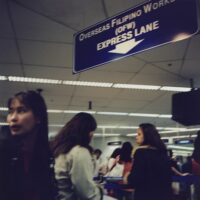 The family’s daughter, Caroline, was born there in 1976 and when the family moved to London Juning went with them. She remained working for them for the next 22 years.

This is the context of “Someone else’s mother”, an acknowledgement by the daughter Caroline of her nanny’s enforced separation from her children.

Caroline is not judgmental about her parents’ choice to employ Juning, seeing their decision “in the context of the generations that came before”.

She briefly outlines their privileged class background, one which they did not feel the need to question. When Caroline was 15, she came home one day to find Juning talking to her youngest son, Roy, a young merchant seaman whose ship had docked in London.

It was, says Caroline, an awkward moment for her, a realization that her beloved nanny had her own family whom she saw only occasionally. Twelve years later, Caroline begins to talk with Juning about her life and the seeds of “Someone else’s mother” are planted. 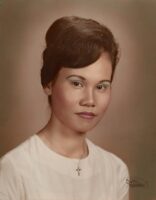 Caroline is now a photographer and her book begins with family shots showing Juning with her employers.

As the story of her life unfolds, the photos focus on the Philippines and in 2018 Caroline goes there for the third time but now with her own two children. She meets Roly, Juning’s oldest child (born in 1964) who lives on a poultry farm, which his mother bought for him and his family in the 1980s.

The interviews with Roly, his brothers Roy (who works on a cruise ship in the Caribbean) and Roel (who works on a fish-processing ship off the coast of Alaska) and his sister Erma (a geriatric nurse in Manila) are sorrowful testimony to the pain of involuntary migration.

Juning retired and returned to Bantayan but comes to regret leaving London, realising that her children cannot be as close to her as she would wish.

She feels estranged from aspects of Filipino culture and misses the value of the anonymity that comes with living in a big city.

Migration and separation are woven into Filipino life; every day, 5000 Filipinos leave their country in search of employment abroad: Roly and his wife foster two young girls whose mother lives and works in Korea and two of their own children work abroad. 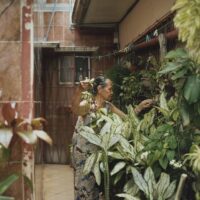 Roly was seven when his mother left him: “I was so lonely. Everywhere I was looking for her care”.

He remembers an occasion when it was time for Juning to leave after one of her visits back to Bantayan.

His sister Erma cried out to her when they were waving goodbye, “I want to go with you!”, and ran towards her mother. Juning shouted back, “No you don’t want to go where I am going”.

“Someone else’s mother”, by Caroline Irby, is published by Schilt Publishing.

(Images supplied by the publisher)