Seeing London is not about going to Madame Tussauds or -goodness, gracious me- taking a selfie outside Buckingham Palace. It is about places that Londoners know the value of, such as the British Museum, Tate Modern and Tate Britain, the National Gallery, the Victoria and Albert Museum.

There are also places of intrinsic interest that tend not to feature in the tourist trail: one of these is Crystal Palace Park.

The park is home to the “Eiffel Tower of South London”, a BBC transmitter (219 metres high) and the most important of its kind in Britain.

The original Crystal Palace was built in Hyde Park for the Great Exhibition of 1851 (when it provided the country’s first public toilets) and later relocated to south London, in the park that now bears its name. It was destroyed by fire in 1936 but the sphinxes, placed by the steps to each entrance, have been restored and repainted to give some idea of the fascination Victorians had for ancient civilizations.

The sphinxes are just one of the park’s many highlights described in “Sublime structures at Crystal Palace Park”.

This publication looks and feels like a pack of playing cards and is primarily for parents but everyone could benefit from using it to explore what Crystal Palace Park has to offer visitors.

London’s pubs need no introduction but “Public House: A cultural and social history of the London pub” will add immensely to your enjoyment of the 121 of them celebrated in the book.

They are arranged chronologically but with the date chosen from when it had the most interesting story to tell.

They are singled out for the quality of their beer, signage, interior design, aesthetics, seating, literary, arty, musical, movie or historical associations and much else besides.

As a guide to London’s pubs, this book cannot be bettered. It is scholarly, hugely informative and a fascinating guide not just to individual pubs but also the history, evolution and culture of the London ‘public house’. The guide comes from Open City, a charity organization concerned with making London and its architecture more open and accessible.

The London Eye is supposed to offer a new perspective of the city but its costly ticket prices make it predictably familiar. For around the same price, “Bird’s Eye London” is a handsome hardback book with over 150 aerial images that provide more food for thought than plonked in a giant wheel for 30 minutes. 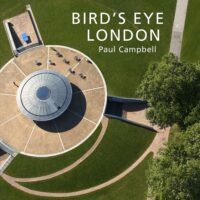 The book begins annoyingly with a monarchist benediction, photographs of “Royal London”, but gathers pace and interest in the sections that follow.

Like the other two books, it will make you want to get out there and see more of London.

“Sublime Structures at Crystal Palace Park” is published by Our Hut.

“Public House: A cultural and social history of the London pub”, edited by David Knight and Christina Monteiro, is published by Open City.