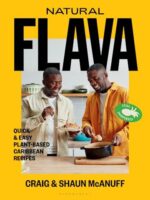 They were turned down. It must have been a hard life in the fifties and sixties when vegans were up there with flat earthers in the crazy brigade.

But no longer. By 2014 there were 150,000 vegans in Britain and plant milks, tofu, beanburgers and much more started trickling into the supermarkets. Now we have veganuary for the day trippers, fake bacon, burgers made from all manner of vegetables, plus lumps of tapioca flour and coconut milk masquerading as ‘cheeze’.

The internet abounds with recipes for meltable cheese-like substances, vegan versions of family favourites as well as more exotic dishes. But they are not inspiring in the way that only a colourful new recipe book can be.

Three recently published ones deserve a place on your kitchen worktop.

They offer exciting Caribbean, Cajun and -most surprising of all- Japanese dishes that don’t use dairy products. They also, mostly, avoid the annoying cheat of putting ‘vegan cheese’ in their ingredients list, what’s more irritating than having to go and buy a highly processed, protein poor, expensive and tasteless item? 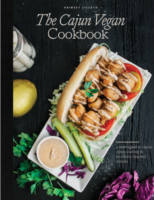 “Natural Flava”, the Carribean offering, avoids the traditional breakfast / mains / desserts route and is filled with quick and easy suggestions for snacks, shared dishes and some lovely one-pot dishes (my favourite, less washing up).

Happily, many of its recipes include some more unusual vegetables -banana flower, callaloo, plantain, jackfruit, ackee- the kind of food  you see in the supermarket but have no idea what to do with it.

There are Caribbean versions of staples like macaroni cheese and a very strange looking vegan version of beef wellington. Carefully illustrated instructions are given for making- and don’t say you know what these are, buss up shut rotis.

“The Cajun vegan cookbook” relies a little more heavily on store-bought vegan items but still has some exciting ways of keeping out the dreaded nutroast.

Cajun dishes use a cooked roux as a base for a lot of dishes and instructions for frying feature heavily.

The recipes are easily navigated -breakfast, soups, mains, side dishes, desserts, drinks- and they offer some striking meals. Poboys are basically filled rolls but the suggestions for fillings are amazing.

“Vegan Japaneasy’s” claim that Japanese cuisine is quite vegan-friendly is gloriously justified with over eighty  recipes. There are ‘no sad substitutes’ and, best of all, the food is easy to cook.

Fish is admittedly an issue and especially so when dashi forms the basis of so many of the country’s dishes.

It is one of the essential items that the book outlines for any vegan Japanese larder and he provides three ways of making it without fish produce.

“Natural Flava”, by Craig and Shaun McAnuff, is  published by Bloomsbury.

“The Cajun vegan cookbook”, by Krimsey Lilleth, is published by Blue Star aPress.

“Vegan Japaneasy”, by Tim Anderson, is published by Hardie Grant.