Angela, Janahan, Merwa, Michael, Mohamed, Nirmala, and Selamawit, are seven refugees who left their countries to search of safety in the United Kingdom. They survived the horrors of war and gender violence, but now face another threat: racism and xenophobia. 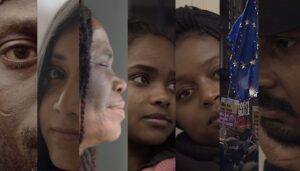 A refugee from Sierra Leone flew from a war which has its roots in British colonisation. Another lived in Ghana, Nigeria and Ivory Coast, before going to the UK. The instability and harshness of his life is portrayed in his statement: “I am only 34 years old, but with the experiences that I have been through, I often feel like 60”. Merwa reached the UK and was aghast about “the hostile environment policies” and the “xenophobia”. She is constantly told that “this is not your home.” This seems a common perception among refugees. In fact, some of them have experienced the dread of the detention centres in Britain.

All these stories merge within a context of a rising xenophobia in the Western world. The far-right rhetoric and the often-shallow analysis of the refugees’ lives created by the mainstream media are factors that threaten our democracies. As we have witnessed in the last decades, people fleeing war from Afghanistan, Iraq, Yemen or Syria, have suffered the unwelcoming attitudes of many leaders in Europe, the stigmatisation from the media and the neglection of a significant part of the population.

This creates a society “ruled by habits and diminishing our sensitivity towards people, and then they become just a number”, warns Anna Konik, director of “Silence Heard Loud”.

Moreover, when refugees are non-Europeans, the racism inherent in the continent emerges in its most callous way.

Michael, one of the interviewed, mentions how some Europeans tend to see outsiders as “primitive” and “savages”.

Anna denounces this approach towards immigrants based on the use of colonial stereotypes and Eurocentrism, which “excludes and segregates people” and “imposes values and towards other cultures”.

To overcome the hate rhetoric and racism, she firmly believes that “everybody has a mission to do, each with its own tool, to build a better future for other people”. Anna makes her documentaries as part of these processes to “bring change to the whole world”.

She has been working for over a decade with refugees and remarks the importance of building international solidarity to defeat the colonial stereotypes, the racism and the xenophobia which permeate our societies. From 2011 to 2015, the Polish filmmaker worked in Stockholm and recorded the stories of 35 women refugees who found shelter in Sweden, Poland, Romania, France and Turkey. Their stories were portrayed in her work “In the Same City, Under the Same Sky”.

For Anna, getting involved in helping those people strengthened her commitment to help to change the situation. “Their experiences opened my eyes even more about the harsh realities they faced: tragedy, suffering, exploitation and injustice”.

From 2018, Anna has been involved in the documentary “Silence Heard Loud”, one of the films that was presented during the Human Rights Watch Film Festival (HRWFF) in London, another piece to raise awareness among the population. “It is important to hear these individual stories, being close to the protagonists to build empathy”.

A cultural project has the potential to become an essential wayw to offer an alternative narrative than the one provided by the mainstream media, which tends to blur the reality, manipulating the facts and failing to explore in depth the horrors faced by people escaping from their countries.

For that reason, Anna emphasises the important role of art, music and filmmaking to give voice to the refugees. In the first part of her interview with The Prisma, Anna Konik talks about “Silence Heard Loud”, the need to show empathy and solidarity towards everybody and her experiences in London alongside the seven refugees who appear in her film.

In “Silence Heard Loud”, the themes of racism, xenophobia and gender violence are very present. How was your experience engaging with the seven refugees?

We spent time together. It was a unique and an intense experience, and thanks to the protagonists I discovered London from their point of view. Through their stories, they described their places, their rooms and what they left behind.

The way they explained about their past combined with their present lives. It was a very personal experience for all of us. Our cooperation was a mixture of sadness, laughter, crudeness and dreams.

With the help of the camera woman, Jozefina Gocman Dicks, we tried to show the world through their eyes.

Considering what they have been through, it struck me their huge strength as well as life maturity.

When Nirmala says in the film that what does not kill you makes you stronger, it shows a perfect synthesis of some of their experiences.

Why did you decide to create “Silence Heard Loud”?

The world can be a better place, without inequalities and exclusion. Throughout the film, I attempted to show this idea. In 2011, I started to work with immigrant women, at a woman centre in Tensta (Stockholm).

I worked on my previous documentary, “In the same city, under the same sky”, from 2011 to 2015, and I recorded the stories of 35 stories women refugees who had found shelter in Sweden, Poland, Romania, France and Turkey. All these experiences opened even more my eyes to the harsh realities feed with tragedy, suffering, exploitation and injustice.

From 2018, I worked in London on “Silence Heard Loud”, and these two films are strongly connected, as each of these stories are overwhelmed by the lack of humanity that people show towards the refugees. This situation should never happen, and we cannot accept the brutality faced by them. 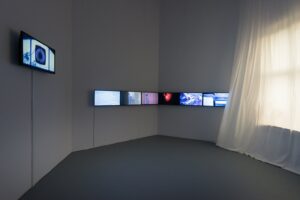 We can bring change to the whole world, step by step, starting on a microscale. “Silence Heard Loud” is part of this process. Everybody has a mission to do, each with its own tool, to build a better future to other people. It does not matter where we are: London, Warsaw, or Berlin. We just shall keep working on that.

In the presentation for the HRWFF you mentioned that media narrative conveys refugees as mere statistics, without even trying to explore their stories. How important are documentaries like yours to denounce and investigate this situation?

Filmmaking is a very important tool of denouncing, same as other forms of awareness raising, such as literature, art and music.

Although art cannot be compared with real life experiences, it serves to explore certain subjects that normally are neglected. For several years, we have witnessed huge waves of refugees, from Afghanistan, Syria, different countries from Africa, and now from Ukraine.

Due to these repeated crises, it seems that they have been introduced in our routines, and this fact threatens to diminish our sensitivity and empathy towards these tragedies.

Thus, refugees can become just numbers. For that reason, it is important to listen the stories told by refugees, to be close to them, and create a feeling of empathy.

How can we try to understand their dramatic lives from our often-biased Eurocentric approach?

A Eurocentric approach is very dangerous. It excludes and segregates people, establishing a difference between those who are considered better and those who are neglected. Eurocentrism imposes values towards others cultures.

In the current world, we still employ the colonial stereotypes. It seems that we have learned nothing from our past mistakes. Against this current, we must listen to the people and help them.

As I was an outsider, perhaps it was easier for me to grasp these issues. If we are willing to engage with people from different cultures, religious beliefs and countries of origin, having different perspectives can be very helpful.