The leader of the Civil Rights Movement dedicated his life to activism, following the philosophy of civil disobedience to change the “white structure power” and the “unjust laws” which were rooted in a racist society. His legacy is an inspiration to contemporary movements of liberation such as Black Lives Matter. 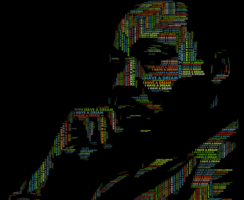 As one of the most famous exponents of the concept known as civil disobedience, Martin Luther King Jr. spent his lifetime fighting against racism through non-violence methods.

He witnessed the murder of friends by the police and white supremacists, the hatred towards the black community, and became an orator and activist to change the order of things.

Living in a society rooted in racism had created deep inequalities among the citizens. To fight this, King promoted equality and organised protests in the public sphere.

In the spring of 1963, King’s campaign to end segregation in Birmingham, Alabama, drew nationwide attention when police turned dogs and fire hoses on the demonstrators. As a consequence, King was jailed along with large numbers of his supporters, including hundreds of schoolchildren.

It was precisely during his time in prison that he wrote his famous Letter from Birmingham City Jail, a tribute to anti-racism and intersectional solidarity. It was one of the most prominent documents of the twentieth century regarding the necessity to change the system from below. For Martin Luther King Jr., that was the only path to people’s emancipation and to reach a society without racism and inequality.

Combining the use of rhetorical figures with a sharp narrative, King urged his fellow human to “rise from the dark depths of prejudice and racism to the majestic heights of understanding and brotherhood.” Letter from Birmingham City Jail was essential to portray the racism in the USA in the 1960s, and conveys clearly the horrific reality faced by the black community.

Aside from his excellent use of language, which made him one of the greatest orators of his time, the power of his words lied in his brutal portray of the cruel treatment faced by his kind. Through Letter from Birmingham City Jail, King related how the “vicious mobs lynch your mothers and fathers at will and drown your sisters and brothers at whim”, how “hate-filled policemen curse, kick, brutalize and even kill your black brothers and sisters with impunity”, and how “the vast majority of your twenty million Negro brothers smothering in an air-tight cage of poverty in the midst of an affluent society.”

How could this order of things change? Martin Luther King Jr. believed that the great obstacle was the “white moderate”. His statement illustrated his resignation at this reality: “I have almost reached the regrettable conclusion that the Negro’s great stumbling-block in the stride toward freedom is not the White Citizen’s Counciler or the Ku Klux Klanner, but the white moderate who is more devoted to ‘order’ than to justice; who prefers a negative peace which is the absence of tension to a positive peace which is the presence of justice.”

His life as an activist is one of the greatest examples of a decade characterised by the rise of social movements. There was a huge turmoil not just in the United States, but across the world.

In the age of mass media, the Algerian War of Independence, and the Cuban Revolution or the War in Vietnam served as a world-wide inspiration for young revolutionaries who craved for a just society. This provoked a huge response against capitalism in France, United Kingdom, the USA, Italy or West Germany. 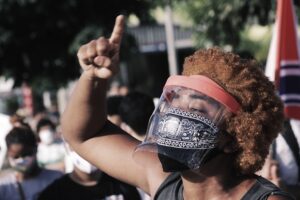 Precisely, Martin Luther King Jr. referred to the Third World countries and encouraged his comrades to follow their example towards emancipation.

Speaking about the “American Negro”, he mentioned that “with his black brothers of Africa, and his brown and yellow brothers of Asia, South America and the Caribbean, he is moving with a sense of cosmic urgency toward the promised land of racial justice.”

Internationalism as the answer to peace

Martin Luther King Jr. was certain about the need for intersectional solidarity to reach freedom. Similarly, Fred Hampton, the Chairman of the Black Panthers in Illinois, Chicago, wanted to advance the group’s goals creating the Rainbow Coalition, an alliance between the Black Panthers, the Young Patriot Organization (YPO), formed by poor white southerners, and the Latino Young Lords.

It was a fight against racism and capitalism, against social, political and economic discrimination. Fred Hampton was clear in his message: “We say we’re not going to fight capitalism with black capitalism, but we’re going to fight it with socialism“.

This meant a threat to the white rich establishment of the American society. For that reason, FBI Director J. Edgar Hoover said that “the Black Panther Party, without question, represents the greatest threat to internal security of the country”. 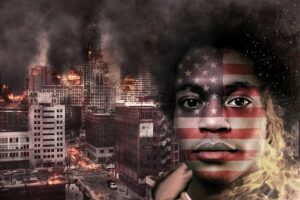 The union of the class struggle with the pursuit of racial equality was meant to provoked a harsh reaction in a country still covered by the decrepit odour of McCarthyism.

The 1960s in the USA was a decade led by Malcolm X, Fred Hampton and Martin Luther King Jr., three of the most prominent figures against racial inequality. It is significant that all of them were killed in those years in the USA, the core of anti-racist struggle, the place where a fierce battle was being fought between progress and reaction, humanism and racism.

The tension to create “positive peace”

Although Martin Luther King Jr. promoted non-violence, he rejected silence, and advocated for a “kind of tension in society”. He explained that “the purpose of the direct action is to create a situation so crisis-packed that it will inevitably open the door to negotiation.”

Furthermore, King wrote that tension as a “nonviolent direct action seeks to create such a crisis and establish such creative tension that a community that has constantly refused to negotiate is forced to confront the issue.”

King was murdered on the 4th of April of 1968, but his legacy stands an example for liberation movements such as Black Lives Matter. As an intellectual well-versed in philosophy, politics and history, he was certain that the changes had to arrive by pushing people from below:”We know through painful experience that freedom is never voluntarily given by the oppressor; it must be demanded by the oppressed.” 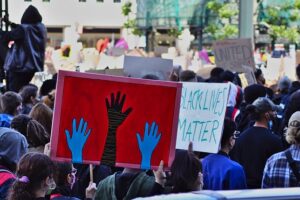 Although Martin Luther King Jr. is now  remembered fondly even by those white who opposed him in the past, he received harsh treatment by the mainstream media, as the headlines of the different newspapers of those times showed. For example, when he called the United States “the greatest purveyor of violence in the world today” for their crimes in Vietnam. He never surrendered his values. And as he concluded, “history is the long and tragic story of the fact that privileged groups seldom give up their privileges voluntarily.” An excellent lesson for our time.