Assange is the spotlight that illuminates the elephant in the dark room. In a state of shock, people take the light away from the elephant to turn it against Assange. And now the ‘elephant in the room’ is the recent verdict allowing Assange’s extradition, and it is press freedom and the marginalisation of human rights.

Assange created a non-profit organisation, Wikileaks, which in its first decade leaked over 10 million official US government documents that were classified as secret.

Their purpose had been to hide from public view and avoid accountability for the countless US war crimes in Iraq and Afghanistan, torture as a state policy, the orchestration of the coup d’etat by Hillary Clinton, Barack Obama and the CIA in Honduras, the heinous human rights abuses by US soldiers, the lies about mass killings of civilians, detentions of innocent children and elderly people in Guantanamo Bay, US government interventions and spying in foreign states.

Wikileaks published the American government’s documents known as the Iraq War Logs, the largest leak in US military history, exposing some 15,000 previously hidden civilian deaths, including medical records of the torture of detainees by US soldiers, describing prisoners handcuffed, blindfolded and hung by wrists or ankles, and subjected to whipping, punching, kicking or electric shocks.

The leaks of more documents, known as Vault 7, exposed the penetration and extent of the hacking apparatus for mass espionage by the Central Intelligence Agency. After their publication, the CIA “made secret plans to kidnap or assassinate Julian Assange”, as revealed by 30 former US officials.

A single man broke the monopoly of understanding our world, giving us names and so to say the ID numbers of those who hide behind the opaque entity which has been called the “Deep State”.

Assange puts to shame the international “free press” through the exposure of truths, showing the choreographed bad faith of “journalists”, mainstream media and their propagandists who are subservient to the machinations of power, war and concealing and manipulating reality.

Assange uncovers a new social class, the mercenaries of the “mediocracy”. And they are simply mediocre.

Niels Melzer, the UN Special Rapporteur on Torture, investigated this case and examined Julian Assange personally at Belmarsh Prison. He used the expression “the elephant in the room” to talk about the Assange case many times.

The elephant in the room is an English expression to illustrate the psychology of deliberate silence in social interactions about the most defining, most controversial and obvious issue. The elephant in the room, circulating among everyone, taking up all the space, but no one dares to acknowledge its existence, while all sorts of superfluous and artificial matters are discussed.

For Meltzer, Assange is the spotlight that illuminates the elephant in the dark room. In a state of shock, people take the light away from the elephant to turn it against Assange. And now the ‘elephant in the room’ is the recent verdict allowing Assange’s extradition, and it is press freedom and the marginalisation of human rights. 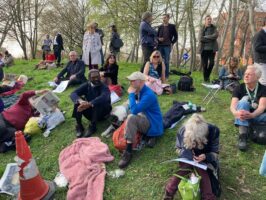 The day is over at Belmash

I am amazed at how many injustices fit into so few paragraphs. The day ended at Belmarsh. I watched activists collect boxes, awnings, ribbons, posters, cups, speakers, bin bags at their own cost and effort.

Josephus, Charisma, Isabel, Emmy, Helen, Naila, Claire, Alison, Erik (93 years old) and so many others were outside.

What always impresses and moves me in the activism around Assange’s cause, is the absolute generosity and effortless sacrifices of those speaking up for him.

Here there is no prospect of benefit in defending Assange, just a concrete wall that you do not know the thickness of and your free hand to strike it. Assange has always been able to move bigger things.

Activists for press freedom and Julian Assange are out every Saturday, attempting to counter the British mass perception of Assange as a “miserable little worm”, as he was called in the Westminster Parliament by Sir Alan Duncan, the Foreign Secretary at that time. Or that Assange is a spy as he was called by Mike Pompeo, or framed in his indictment directly prepared by the CIA. Or that he is a narcissist, as described by the judge who sentenced him, Michael Snow. Or that he is a serial rapist, as the Swedish Chief Prosecutor, Marianne Ny, attempted to label him, who illegally reopens an investigation that was closed by the original prosecutor of the case, due to lack of evidence of illicit actions.

Ny threatened the British authorities in an email: “Don’t you dare get cold feet!” referring to the accusation brought in collaboration by Anna Ardin, a “feminist activist” with direct links to US-funded anti-Castro and anti-communist groups such as “Las Damas de Blanco”, which receives US government funds and counts convicted terrorist Luis Posada Carriles as a supporter.

This email would have turned into archived mat erial were it not for the resilience of Italian journalist Stefania Maurizi.

My respect and admiration for the little lanterns of this dark, and sometimes senseless, world of war-makers.

I did not want to, but I had to write because it is necessary to remember that when the text ends and when the sobering force of the facts ceases to illuminate so vehemently, the persecution of Assange goes on. And because those against him have all the discretion and means to cover-up their abuse of power, but we have the truth. When Assange is free, we will not forget either.

(Photos by: Kathleen Fournier, EF Press, Barnaby Nerberka and Sara Vivacqua. All photos have been supplied to The Prisma by Sara Vivacqua and authorised by her for free publication.)