The modern buildings, the shops with dazzling window displays and the electronic advertising screens make it difficult to believe that the famous square was built in 1819 to connect Regent Street with the main shopping street: Piccadilly. 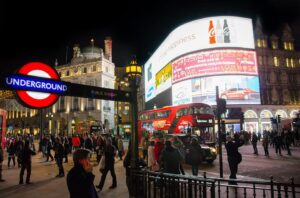 People of different nationalities, professions, ages, occupations and conditions have something in common during their stay in London -whether permanent or temporary- their journey through the famous square.

Portugal Street was its first name until the 17th century when a famous tailor called Robert Baker made a great fortune selling piccadillies, a type of collar very popular in that century. He built a great house and it soon started to be known as Piccadilly Hall.

At first, the square had a circular shape, from which it got the name “Circus”. However, with the construction of Shaftesbury Avenue in 1886, it lost its initial appearance.

Piccadilly station, which has exits on each side of the square, is itself a standout building, as it is one of the few stations completely underground and without any associated building. 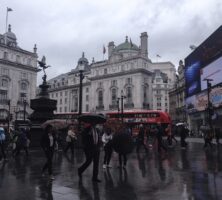 Leaving this station is always an odyssey: shoving to get out, waiting to swipe your ticket and with the escalators so crowded that they can hardly go up.

Of course, it is midday, and although it is not rush hour for tourists, the hustle and bustle is also inevitable and unceasing as is the case in certain areas of London.

The first view settles on the vast advertising hoardings that, even in full daylight, are dazzling through their illumination.

When the first adverts appeared on the facades in 1908 they were distinctive.

Mainly because most of these were on the famous London Pavilion. Now, most of them are on the famous corner at the end of Shaftesbury Avenue. The luminous attraction makes people from diverse cultures pose for the famous scene that adorns thousands of tourist postcards. Likewise, various street artists do their best to impress a demanding audience.

Right in the neighbouring street, the building that was once the historical London Pavilion built in 1859, is today a shopping centre. That is where consumer society satisfies its needs. 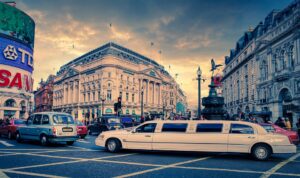 At first this building was a music hall, then a cinema and finally it is now a shopping centre. In 2000 it was merged with the neighbouring Trocadero Centre and is currently referred to as the London Trocadero.

In the heart of this history, you reach one of the greatest casinos, just off Leicester Square, that breaks with the line of buildings and the types of locations that are found there. Closed until further notice, no-one has stopped looking at it, there are so many people on the same pavement that there is no time to lose in renovating the site. The streets are full of traffic, where you can find Rickshaws, an ecological alternative to public transport. These are a bicycle-taxi that are seen everywhere taking tourists and Londoners to different tourist sites. This practice has become more famous and desirable for visitors to the city.

After a long day walking, the idea of getting on one of those bicycles and letting yourself be transported without worries is attractive. However, it is not possible to go “anywhere” because the route is predefined. 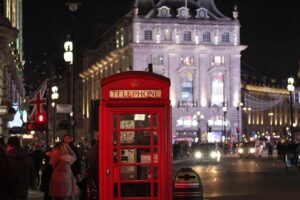 The frenetic movement in the square is inevitable, because this is the place where a number of theatres are found showing many of the most famous plays.

Like, the Sondheim Theatre (it opened as the Queens Theatre in 1907) with Les Miserables, where the show has been performed for more than 35 years, with the actors changing from generation to generation.

Another interesting scene is in the famous Criterion Theatre, on the south side of the square. The entire theatre is underground and houses a 600 seat capacity. It was built in 1874, and although the original idea was to turn it into a concert hall, it ended up hosting a number of famous plays including The Complete Works of William Shakespeare. Since 2006 the main work has been The 39 Steps.

In the middle of all the commotion, people in suits with briefcases are seen rushing in different directions, not wasting a second to answer questions. This rush contrasts with the relaxed faces of the tourists, who when being asked about their stay, remain charmed by London. 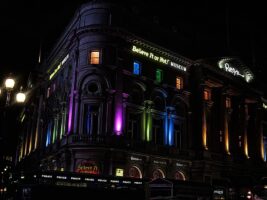 On the south-eastern side of the Circus, moved from its original central position, is the Shaftesbury Memorial Fountain, built in 1893 to commemorate the philanthropic works of Lord Shaftesbury.

The statue (built by Alfred Gilbert) erected on the fountain was the first to be made in aluminium and represents the image of Anteros, God of Unrequited Love. Many people do not know this, most think that it is Eros (Cupid).

These days it is the meeting point for thousands of tourists who pass through there. It is the spot where people sit to read, to eat during breaks or simply rest after a day of tourism. Many try to take the all-important photo with the impossible aim of not appearing with the surrounding crowds.

That place is also where the homeless sleep in summer or where others have their last drinks after leaving the surrounding pubs. Where people wait for their partner to finish shopping in Lillywhites or where skaters and cyclists pass without brakes and force more than one passer-by to move aside. 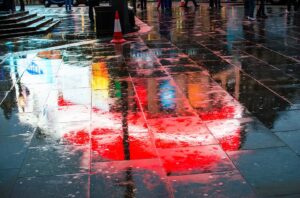 Originally, the figure was in the centre and was pointing with its arrow to the north, towards Shaftesbury Avenue. However, after the changes were made to the square, its bow was corrected to signpost towards the south, Lower Regent Street.

Right in one corner of the square is one of the many fountains that adorn London. However, in this case, most people do not notice it, few stop to read that it is dedicated to the organisation Disabled Living Foundation, established in 1969. Many sit down to eat a sandwich and others simply prop themselves waiting for the traffic light to turn green.

The street that houses that fountain is one of the four most important London thoroughfares to connect with Piccadilly Circus. All of them house clothes shops, cafes, Italian restaurants, fast food outlets and souvenir shops that fill the main streets. 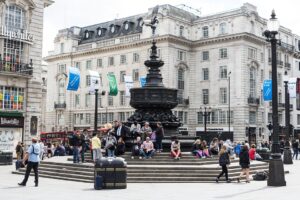 However, there are also shops with history, which have been maintained throughout the years. In the square itself is Lillywhites that was moved to its current location in 1925.

The old Tower Records was a very important place for music lovers, where they would come in the search of rarities that could not be found anywhere else. Later it was bought by Virgin Stores and now is full of cafes where the tables are filled with coffees and aperitifs for the customers.

Another example is the bookshop Waterstones, the biggest in Europe, which is one of the most admired buildings in London architecture.

Additionally, only a few streets away, along Shaftesbury Avenue, a fusion and contrast of cultures can be seen, with another of the more crowded and important areas of London, Soho. However, that is another story.