On 30 April in London, protesters targeted the branch of HSBC on Oxford Street for an action demanding that the British bank remove Cuba from its sanctions policy. 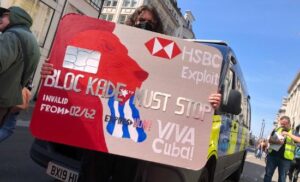 Text and photos by FRFI

The action was called by Rock around the Blockade (RATB), the Revolutionary Communist Group/Fight Racism! Fight Imperialism! and supported by organisations including Cubanos en UK.

HSBC is complying with unilateral US sanctions against Cuba.

Imposing US sanctions on UK interests for dealings with Cuba is illegal under UK laws, most notably the 1996 Protection of Trading Interests Act.

Despite this, HSBC has been obstructing financial transactions and UK bank accounts which either engage with Cuba or refer to Cuba. For example, HSBC ‘inhibited’ the account of Cubans in the UK, a community association raising funds to send medical equipment to Cuba. 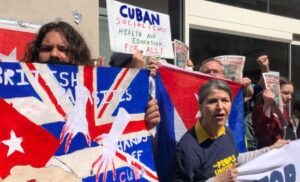 After this was denounced publicly and protests called around Britain, HSBC unblocked Cubanos En UK’s account with an apology.

However, Cuba remains on the bank’s sanctions list and no assurance was offered that Cuban’s bank accounts would not be suspended again, so the protests went ahead.

A theatrical spectacle was organised to grab the attention of the public: actors dressed as Uncle Sam and Lady Britannia appeared at the HSBC branch and loudly declared the reality of British and US imperialist collaboration against Cuba.

Slogans on placards and speeches decried “Sanctions are war!” and promised “If you blockade Cuba, we’ll blockade you!” 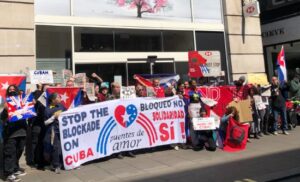 Letters of complaint signed by HSBC banking customers were handed in to the staff, with demands including: HSBC remove Cuba from its list of sanctioned countries; HSBC allow Cubanos En UK’s account to operate without discrimination, and HSBC allow UK residents to use HSBC for commercial and/or solidarity relations with Cuba including fundraising activities.

The protest was successful in forcing the HSBC branch to close for business throughout its usual opening hours, if HSBC or any other UK bank wishes to avoid being targeted by the solidarity actions of Cuba’s supporters, they should accept the protesters demands and immediately cease their illegal compliance with extraterritorial US sanctions.

The US blockade against Cuba has been in place for 60 years and is estimated to have cost over 144bn pounds cumulatively. 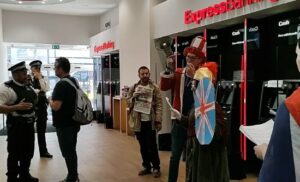 Former US President Trump imposed an additional 243 measures against Cuba and more have since been enacted under President Biden.

With its alternative model of production, participatory democracy, outstanding universal systems of free healthcare and education and internationalist support for anti-imperialist struggles worldwide, Socialist Cuba is the threat of a good example – the blockade is a crucial tool in the US’s six-decade attempt to crush socialism in Cuba and Latin America.