A UK and Irish parliamentary delegation travelled to Colombia to a place inhabited by indigenous Wayuu and Afro-Colombian communities whose rights are being negatively impacted by the work of a mining company. 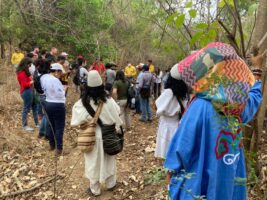 UK and Irish Delegation of members of the UK Parliament and the Irish Dail, Brendan Oâ€™Hara MP, Claire Hanna MP and Gary Gannon TD, were in Colombia from 1 to 7 April 2022.

There they met with Carbones del Cerrejon coal mining company (Cerrejon) in La Guajira, and with the Wayuu indigenous and the Afro-Colombian communities, whose rights are being negatively impacted by Cerrejon.

The Cerrejon is the largest open pit coal mine in Latin America, which until March 2022 was jointly owned by multinational giants Anglo American (British) BHP (Australian), and Glencore (Swiss). After intense exploitation for over 20 years, in January 2022, Anglo American and BHP finalized the sale, announced on 28 June 2021, of their share in Cerrejon to Glencore.

As reported by ABColombia, the UK and Irish delegation has expressed their profound concern that following Colombia’s Constitutional Court decision, announced on 6 April 2022, to reopen Ruling SU698/17 on the Arroyo Bruno Case and to reassume the oversight of compliance with, and completion of, the orders given in the sentence, the Technical Roundtable (Mesa Tecnica Interinstitucional) of which Cerrejon is a member, announced that Cerrejon had complied with the fifth order of the Judgment corresponding to the study of the uncertainties, issued by the Court in ruling SU-698/17, and could start exploiting the Arroyo Bruno riverbed. 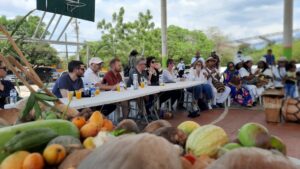 According to National NGOs accompanying this case, the orders issued by the Court in this ruling had not been complied with, including ensuring the participation of the plaintiff communities of La Gran Parada and Paradero; which is why they requested that the case be reopened by the Constitutional Court.

This decision by Colombian Government institutions will destroy the natural flow of the Arroyo Bruno in the South of Guajira, which Wayuu Indigenous Peoples and Afro-Colombian communities have been struggling to protect through recourse to the law. Several studies point out that coal mining in general, and Cerrejon specifically, has accelerated climate change and created risks and impacts on groundwater supplies.

In 2014, IDEAM characterised the Guajira peninsula as one of the most vulnerable areas to climate variability in the country, and that its high levels of aridity make it one of the regions with the largest water deficit. Cerrejon’s monopolisation of water for its mining activities is already restricting access to water for local communities, and this will be further compounded by the destruction of the natural course of the Arroyo Bruno. 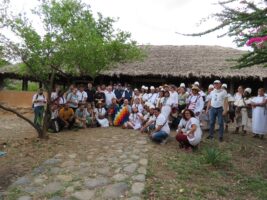 The UN Special Rapporteur on human rights and the environment said that the case was ‘one of the most disturbing situations’ he had encountered in his time in this role.

It is alarming that the Technical Roundtable (Mesa Tecnica Interinstitucional) have taken a decision which would allow Cerrejon to destroy the natural course of the Arroyo Bruno when a Constitutional Court Case is still in progress.

This unfortunately is a repetition of when, just before the Constitutional Court announced its ruling on the Arroyo Bruno, the company rediverted the stream. The Court ruling stated that CerrejÃ³n had not complied with all the legal and technical requirements under Colombian Law to redirect the Arroyo Bruno.

Therefore, there is a grave risk of the Company destroying the natural course of the Arroyo Bruno before judicial authorities make a final ruling and the communities have all been consulted.

The communities of La Gran Parada and Paradero have reiterated the absence of guarantees for their participation in the consultation process. 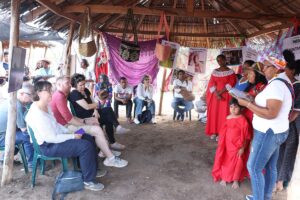 The Constitutional Court’s decision to reopen the Arroyo Bruno Case (Ruling SU698/17) to reassume the oversight of compliance with, and completion of, the orders given in the sentence, should be allowed to take place and its decision reached before any destruction of the natural channel of the Arroyo Bruno occurs.

In light of the above, the members of the delegation urge “the Procuraduria General (Inspector General), to take Urgent Provisional Actions to prevent the company from permanently destroying the natural channel and the stream. We also call on the Ombudsman’s Office (DefensorÃ­a) and Comptroller General’s Office (Contraloria) to take action as the competent control bodies to monitor the member institutions of the Inter-institutional Table, as well as guarantee the participation of the communities Â in said decision-making process.”