The Earth is an animal. She shakes off her fur when she comes out of the water. She is a living thing, spinning on her axis from the moment she was born from the powdery particles of the universe. She knows she exists. And like all living things, parasites have taken root on the pastures of her stony body. 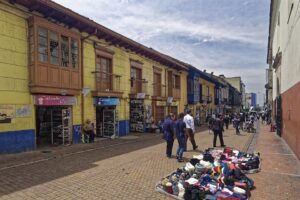 Even the most vicious of fish have parasites. And they carry them from their bodies to others, their scales in charge of cleaning up the rubbish. But who cleans the scales?

Someone else will do it. And so it goes on. There are birds which do the same job and they seem to do it much better than any cleaning company in the capital city.

One look around Bogota, and all you see is a city drowning in concrete and cars, cars so wide they can barely squeeze through the streets.

Or maybe a cleaning company will come along and cover them up with cheap tarmac: the Bogota Savannah.

The metropolis is a frenzied animal. But what can it do to defend itself? Jump. Cry. Ask us to show it some mercy? Ask us to refrain from filling it with temples, where even God refuses to pray; or perhaps to stop filling it with shopping centres and university garages? People and more people. The unfortunate inhabitants of this crazy town! Even the galaxies are fed up: causing explosions then going to sleep forever in huge black holes. 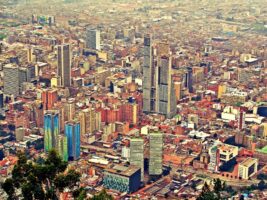 But leaving out the poetry, the stark reality is that the Earth, deep below its surface, is trembling. Its unexpected tremors deliver the most deadly of jolts: just take a look in the papers.

When did it last happen in Bogota? It was 1967, when the city had a population of just 1.5 million.

There had been a mass exodus to the city: violence between liberal and conservative factions had resulted in a death toll of 300 thousand.

The second wave had begun in 1964 after a series of surprise assaults (as unexpected as any earthquake) at El Pato and Rio Chiquito (Colombian regions) against rural communities, designated ‘Independent Republics’ by the 19th Century landowning elite.

It was a social earthquake that continues today: throwing thousands of fish out of water, fated to live and die in the ever-welcoming capital city.

One morning, that same year 64 or 67? I found myself in the Communist Party headquarters. The leaders gathered in the building’s central courtyard; I could see the fear in their eyes. They thought the violent shaking heralded a war in the city, after four years of fighting in the country. The quake was 67 but he talks as if he means 64. 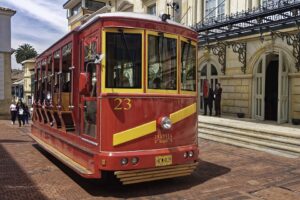 I stood in a doorway (I’d read that was a safe place to be) until the epicentre travelled through the city and on to the region of Huila, where it began its indiscriminate bombing of the population.

It was a new type of guerrilla warfare, prolonged by Mao Tsetung, and it was all captured on film in a documentary by French cameramen.  It would be good to know if they are still alive, and if so where they are.

There were other earth shattering events in Bogota – the city watched over by the peaks of Monserrate and Guadalupe – but the largest was in 1917, the year of the Russian Revolution. Could we feel it? All that way away? The first time the poor and wretched rose to power. Because, for ten days (not the same ten days as John Reed’s masterly work “Ten days that shook the world”), the tremors continued with bursts of activity. The most violent earthquake lasted 15 seconds, on the 31st August.

Of course there have been other earthquakes, between the years 1826 and 1827, returning again in 1906 to the Andean enclave that is Bogota; situated 2640 metres above sea level. 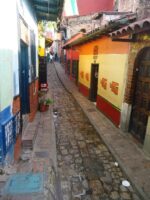 The threat has never gone away: as the priest Francisco Margallo warned; “On the 31st August of a year I cannot say, successive earthquakes will come to destroy Santa Fe.” (As the city was then known).

The latest August earthquake may not have been felt as far as Bogota. But as the saying goes “it is better to be safe than sorry”. The Mayor’s office shuld start up an initiative in partnership with the private sector, to give the whole population an ’emergency kit’.

He could sell them, or give them away, just in case Margallo’s warning comes true this coming year when another earthquake will be commemorated: the genocide of the First World War.