Government agreements facilitate exploitation by business interests and provide a source of income to the country exporting its workers. Religion, racism and language problems are useful tools to stop migrants demanding their rights, with echoes of colonialism. Historical events in both countries can have unexpected impacts.

The story of the Turkish immigrant community in Germany offers many insights into how migrant communities survive and resist racism and economic exploitation.

Cultural activities can be suppressed to facilitate economic exploitation, and yet they also provide innovative solutions for the migrant community: in this case through music production.

There are about 3 million people of Turkish descent in Germany: it is the biggest immigrant group, and of Turkish people outside Turkey.

The German government first invited so-called guest workers (Gastarbeiter) in 1955, and this was followed by an agreement between the two countries in 1961, which suited the two governments very well.Turkish immigrants in Germany quickly discovered that they were living in a parallel universe as hidden workers, excluded from the rest of German society. As someone in Cem Kaya’s film says, at the time of the Ford worker strikes, and referring to the writer Max Frisch, “They wanted workers, but they got human beings”.

This story is told through the fortunes of music production, in a film “Love, deutschmarks and death”, by Cem Kaya, which was shown at the Indielisboa film festival. I was not able to interview the film director, but I did have fascinating conversations with professor Holger Lund, whose article on the hidden history of Turkish music also referenced Cem Kaya’s valuable assistance.

They were doing unskilled work that did not require use of German?

Yes, mainly, and outside work they could stay within a Turkish speaking environment except for filling in official documents.

They had to rely on their children being raised in Germany to come with them and translate, which could be a burden if an old parent for example needs a lot of trips to hospital.

Latino migrants in the UK are sometimes exploited by people of their own nationality who arrived earlier and opened a business or are in a supervisory role in a company.

They trust them, thinking they will understand their problems, but instead they are exploited.

It happens in Germany too, but not in factories because the German government and German companies are arranging the employment not private individuals.

There was a campaign supported by both governments to encourage Turkish people to come to Germany. German companies get cheap labour -here exploitation kicks in again- and Turkey’s balance-of-payments problems are alleviated because the migrants send significant amounts of money back to their families. To put it cynically, Turkey is selling their citizens as slaves in order to get their foreign currency, as Gulseven Guven says in a documentary film.

What was the effect of the 1980 military coup in Turkey on the Gastarbeiter population?

People involved in political opposition in Turkey and many educated professional people started arriving, including musicians, writers and film-makers. These people were not connected to the more or less unskilled peasants from the countryside that had been invited in the ’60s. So, although they were important new activist voices who demanded rights for Turkish migrants, they were not appreciated per se by most of the rather conservative community that was already there.

Was this separation the case in Turkey too?

Yes, but I would like to add a comment from Lala Akgun, who is the first Turkish MP in the Social Democratic Party in Germany: “Many Spanish intellectuals also left their country because of the Franco regime. In Germany, they seriously cared about the education of all Spanish children, and founded parents’ associations. The Turkish military junta in the 1980s knew that the intellectuals who had fled to Germany should never be given sovereignty of opinion over the guest workers. Many Islamic associations were founded here, well financed from Turkey, to Islamize the people and to make sure that they do not wake up politically.”

This benefitted the German government and the German companies too because it ensured that the workers would not join with the movement to demand rights or go on strike for higher pay.

And until the 2010s, despite the Gezi Park-protest in Istanbul, there was no serious protest in Germany against the regime in Turkey, so this use of Islam worked very well.

There is a lot of double-talk by politicians. Merkel as a Christian Democrat leader had to talk about Christian values, but she was also leading the EU effort to keep Syrian refugees in an area between Syria and Turkey to make sure they didn’t arrive in Germany. 1 million did arrive, but interestingly this followed intense pressure from the German Employers Association for more workers.

What changed for the Turkish community when the Berlin wall came down?

It was a disaster. The Turkish communities were beginning to feel more settled, there was a second and third generation who had learned German much better than their parents, and there was work.

The East Germans began competing in the same low-paid labour market, and being white and not Muslim they got preference and a lot of Turkish workers lost their jobs. There were also racist attacks that had never happened before, with people killed, and houses set on fire. Everyone was occupied with reunification, and the Turks were the losers that nobody cared about. Younger people started to express their feelings, fears and rage, kicking off Hip-Hop music in Germany.

Your article talked about the way racism interacts with economic forces

It works through culture, because if you suppress a culture you also suppress peoples’ rights and their awareness of them.

If I am not allowed to have an awareness of myself within a culture, you eliminate the question “Who am I?” which is a means of keeping an ethnic group in a passive, silent position.

The Turks were invited in as a workforce, but no language courses were made available to help them integrate: some people who have been here up to 40 years cannot speak German. And it is not their fault – if you are working days and nights, overtime and weekends you are too exhausted to learn a language by yourself. They needed free time and support, so this lack was a means of suppressing their culture within German society. It created a barrier between them and German or other workers in factories, and made it impossible to demand their right to equal pay for example.

And when the Turkish Ford workers went on strike in Cologne in 1973, they were not supported by German trade unions. 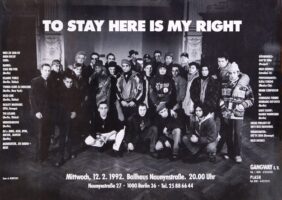 Is racism in Germany and Eastern Europe partly a fear of black people as the unknown, in a country with little colonial history?

It is true that Germany only had a few colonies in Africa, and I was a teenager before I saw a black person here.

Black US soldiers stayed on their bases most of the time.

But the conference on dividing up Africa in 1885 was held in Berlin. Germany was a bit late, but they also wanted a slice of the pudding.

And the Nazi regime occupied huge areas of Eastern Europe, with the stated aim of making those countries German colonies under the big slogan of “creating a habitat in the East”.The Ottoman Empire was a colonial power, but it was financed -and owned- by French and British banks, and it always needed money and arms to maintain control of its colonies. In exchange, they sold rights to mining and raw materials including opium to European companies. The latter was used then by European powers for example to dominate and rule China.

After 1923 the Turkish Republic embarked on an internal colonisation process – cutting off the historical past, the cultural past, the music, the languages, the alphabet and the religion – the typical moves of a colonial government.

Racism is deeply connected with nation-building, in both Turkey and Germany: it requires a good ‘we’ and a bad ‘other’.

(Next week: how music and business innovation led to cultural changes.)