This is the thinking of Selma James, who advocates the union between feminism, anti-racism and the environmental movements, and for whom a Care Income is an instrument to end poverty, reduce inequalities and protect the planet. 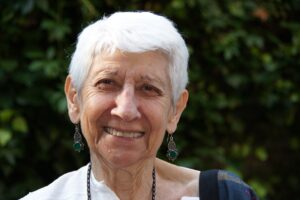 Since the publication of “A woman’s place”, Selma James has always been protesting to end racism, especially the institutional racism that comes from the state.

She praises the role of “women of colour, and women who do not have the documentation” in this struggle.

There is hardly a doubt that their work has been essential to change the social consciousness and improve the conditions of women. But it has been a long road and there is still much to accomplish. Selma has witnessed the difficulties within the struggle for equality.

In 1972, she founded the Wages for Housework Campaign to bring together women assigned to perform domestic work and housework. The aim of this movement was to change their situation of dependency, reverse the relations of power, and redistribute the wealth that they produced. That is, to erase the “unwaged labour” done by houseworkers and carers.

According to Selma, this must be put into practice in the form of Care Income, a mechanism “to end the poverty of mothers and children, and to encourage every gender to care for and protect the natural world, the soil and the climate.”

For women’s emancipation, the Care Income is fundamental, as it will provide them with more freedom to keep searching for innovative projects to protect the Earth.

In the programme of the Green New Deal for Europe it is stated that is necessary to “implement a Care Income to compensate activities like care for people, the urban environment, and the natural world.” 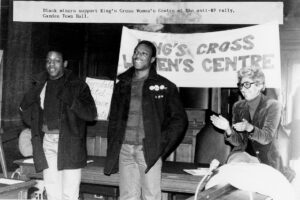 In other words, in order to create a new type of society, more sustainable and collectivist, the materialist conditions must be changed to give real power to the people.

However, the fight is far from being straightforward.

Despite having established networks around the world with many different organisations, Selma laments the “schism in which all human beings are divided: by gender, by race, by sexual preference or by age.” To solve this situation, “each of those divisions has to be understood, respected, and then changed.” To unite all of society, Selma underlines the importance of the Crossroads Women’s Centre in Kentish Town, where we are talking, a place in which several dozen groups are working together, establishing networks on a global scale.

This model of international solidarity knows no borders and it includes alliances “with prisoners, lesbian women, sex workers, asylum seekers, or women of colour.” Moreover, many men had joined the struggle, and she praises those who are organising for “refusing to go into the army, who reject the wars that capitalism has started.”

In Selma’s thought, the need of cooperation is fundamental: “We unite all the struggles together. We are all oppressed, we do not want separatism.”

In the second part of the interview with The Prisma, Selma James talks about the Housework for Wages Campaign, the importance of a Care Income and the international solidarity to unite different groups against capitalism.

“A woman’s place” was published in 1953. How has the relation between men and women has changed since then?

Things have improved in many ways. Nowadays, women do not have to ask their husbands for certain things. 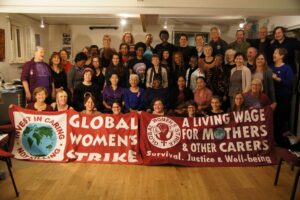 I remember going to the post office in 1972, the place where women went on family allowance day to get their money. It was the equivalent of today’s child benefit, and I asked them to sign a petition, because the Government wanted to take away that right. Back then, a woman would say that she would not sign anything that her husband had not read before.

But I would say: “madam, they want to take your family allowance,” and she would reply: “where do I sign? This is the only money I can call my own.” That was the answer. One of the issues is that many women have thought that the only way to solve their problems is to get a job and save money. In 1970, I knew a woman who got equal pay, and this was announced inside the factory. She was a West Indian woman, and said loudly: “I am going to pay half the mortgage,” and that would be the end of male rule. That was the meaning of equality for her.

It was not that easy, and this represents a serious schism from which all human beings are divided. First by gender, then by race, by sexual preference, by age, we are divided in so many ways, and each of those divisions has to be understood, respected, and then changed.

This is precisely why people must join together against capitalism.

I want to end racism, and first of all, racism that comes from the state. It comes with the difference of employment, policing, housing or education.

We women fight against that, and we are not given credit for the work that we do against racism. Women of colour have always fought, even women who do not have the documentation. It is very crucial to acknowledge the people who make the struggle. 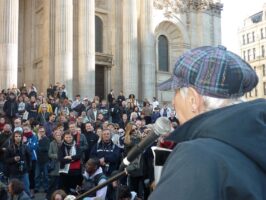 An increase of women’s power is necessary, because the caring work it is also a duty for men and every gender. It must be understood that the split between men and women is between those who do wage work and unwaged work. We as women want money and recognition of our job. It is wrong that we care for other people, but we are poor because of it.

And those were some of the reasons for which, in 1972, you founded the Wages for Housework Campaign. Which challenges did you face during that period?

Initially, the left was against it. They have changed, but the left did not like that we women thought that we did not need men to write a theory for us, that we as women could develop our own theory.

If you begin with women, eventually you get everybody, because you involve children and men. But if you start with men, there is a danger of leaving children and women aside. And this is what has happened all the time. Beginning with women you hold the whole international class.

We have worked with prisoners, with lesbian women, sex workers, asylum seekers, with women of colour, we bring all the struggles together. We don’t want separatism; we don’t focus on which kind of people is the most exploited. We don’t have this kind of thinking, because we are all oppressed, and each sector must discuss and show the importance of this struggle. And then, we join all together to support us, because we need each other.

We have the Crossroads Women’s Centre here in Kentish Town and different networks in other parts of the world. There are also men’s organisations which have done a great job in refusing to go into the army, who reject wars that capitalism has started. 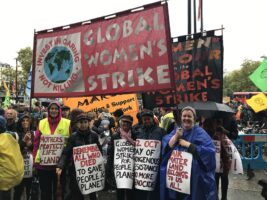 Like the one in Ukraine, a war created by NATO. Obviously, Vladimir Putin is a brute, and they knew that before the conflict. But there are many people like him, take Trump, who is also a brute and a Nazi. There is no superiority in the West, it is merely the same in another language and in another culture.

What role can the Care Income play in the emancipation of women, the fight against racism and the ecological movements?

No matter our colour, we women need a liberation, and we must face the struggles together. In that regard, the main function of a Care Income is to end the poverty of mothers and children, and to encourage every gender to care for and protect the natural world, the soil and the climate.

We want a Care Income for the people and the planet, because there are sustainable ways to protect the Earth. For example, women in India are using alternative methods of agriculture to reduce the climate crisis.

There are many global movements hidden from us. For example, racism is a way of concealing the struggle of people of colour, refusing them a passport, a place to live, or a job. We need to fight against that, because everybody is involved.

(Photos from Global Women’s Strike, provided by the interviewee and authorised for publication).)