Facing the climate crisis, the global pandemic and the wars requires a global movement. For Selma James, the international solidarity is organically born from cooperation with others. According to Selma James, “people must organise 24 hours a day so that people can be active in their own defence”. 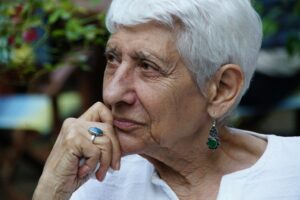 There are no written guidelines to create a global movement which pursues people’s interest. In Selma James’s words, the system we want is created through common solidarity.

Politically committed from an early age, Selma James is convinced from her own experience that when you fight for your freedom with others, those people become more important than family. This is how movements are born.

From the time she attended her first demonstration in 1936, until 2022, she has always been a strong supporter of international solidarity. And she has learned that socialism is not a utopia, but the way to avoid global destruction, because “capitalists are so greedy that they are ready to do anything even if the world disintegrates, because they want more profit.”

If the richest people can benefit for the scarcity of resources, this situation will make poor people more desperate and easier to coerce to follow capitalists’ interests, the global commitment to change the system must be pursued relentlessly. “We have to organise 24 hours a day to get people active in their own defence.”

In the third and last part of her interview with The Prisma, Selma James talks about climate change, global protests and establishing links to defeat the propagandistic machinery. 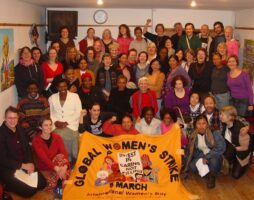 In an uncertain world with the threat of global warming, the pandemic and wars, how can we create a new type of society?

Finding the system that we want is not like looking for flowers. When the struggle against capitalism takes place, we begin to respect and to love each other, and then a new system can arise from the struggle.

It is a whole process: you begin to love the people you struggle with, the people on whom your life depends, the people that matter to you. You cannot be prejudiced against them; you need them and want them to be with you.

In Spain it happened in 1936, people loved and cared for each other. That is socialism. When you struggle for your freedom with others, they can become even more crucial to you than your own family. That is where the new movement comes from.

Do we still have a chance to avoid the global catastrophe?

There is always time, unless the climate defeats us. The problem is that capitalists are so greedy that they are ready to do anything even if the world disintegrates, because they want more profit.

Capitalism only cares about profit, not about people. For that reason, climate change is so frightening, because the people in charge don’t care. Politicians think that they are leading, but in reality, NATO is in charge. There are dangers like wars, which are aiming to create hatred between humans. 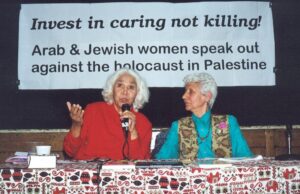 To stop them, we need to organise 24 hours a day to get people active in their own defence. It is our job, as everybody has a stake in the climate. The struggle consists in building the movement.

Despite the fact that many of those movements are being silenced, do you believe that modern technologies, such as social media, can help us to promote international solidarity?

We have a chance to build an international network, and even to communicate in many different languages as there are people who work as translators. When we began to struggle many decades ago, we did not have any money, and all we had we used to pay for telephone calls to the USA, Canada, Italy or France, where we had people involved in the movement. It was the only way to keep together and get in touch.

Back then, phone calls were much more expensive than now. Skype is free, I can call my friend in Philadelphia, Los Angeles, Toronto, and I recently had a meeting of an hour with the domestic workers that did not cost anything. It is different from 1972, when every penny had to be put together for phone calls.

And we can approach children at schools. I spoke in a children’s library in London, and the mothers came with their children. How lucky they were to find out how people live in other parts of the world, because there were people there from Turkey, Jamaica, and Ghana. The children could know about the different languages, the food, and how life is in many parts of the globe.

During the 1970s, the people around me spoke only English, but now people have the chance to learn about the world. They grow up with the world in their minds.

Whereas people can benefit from easier ways to establish global connections, capitalism is also using the propaganda of mainstream media to perpetuate its cultural hegemony and gaining more legitimacy for its actions. How can we confront this situation and speak with people to tell them the truth?

We have to build a movement, and that is fundamentally what Global Women Strike is trying to do with both women and men. This movement must be anti-capitalist, refusing racism, sexism or homophobia. In this struggle, we have established networks with a number of organisations in different countries and we are building a women’s movement.

As an example, we have this building (Crossroads Women’s Centre), we have fought for it for many years, putting a lot of pennies together, being careful with the money.

Women have done a fantastic job in this country, and internationally. In Spain, one of the first things that we did for the Wages for Housework Campaign, was to ask for a meeting with members who had been involved in Mujeres Libres (the anarchist women’s organisation that existed in Spain from 1936 to 1939).

They were elderly women who came to speak with us about our struggle. They had been great fighters alongside the men. During their time, they formed a movement for liberation in Spain. They were what nowadays we would call feminists.

We must see the connections and the education that each sector gives to the whole working-class. Women, people of colour, immigrants, low paid people, problems at work, the state police; all of these aspects are questions for the working-class. We must analyse those problems individually, understand the people who are struggling and how they face them, and also know that this is part of our struggle, whoever we are.

In the meantime, there are new laws being approved in the United Kingdom, such as the PCSC Bill or the Nationality and Borders Bill, that threaten Human Rights.

We have campaigned against all of those. Some weeks ago, we did a fantastic campaign against the anti-immigrant bill, when it was going through the House of Lords. We have worked with others who are ready to fight alongside us.

What is happening is very frightening. Women are going to lead the struggles against deportation and to keep their children, because the state takes your children. This is like what happened in Spain during Franco’s dictatorship and in countries like Argentina.

The first Wednesday of every month, we hold a picket in front of the family court in London, bringing women together to demand non-separation.

We always want to join with other organisations which sees things our way in relation to this. Even if we disagree in

(Photos from Global Women’s Strike, supplied by the interviewee and authorised for publication).)