Leader of the Waorani community in the Ecuadorian Amazon, Nemonte Nenquimo is a symbol of resistance after winning a legal battle to protect her reserve.

The Waorani nation is a tribe of legendary hunter-gatherers numbering around 5,000 members spread across 54 communities who consider themselves guardians of the Amazon. They face multiple threats from the oil companies which, in addition, is exposing them to a greater risk of infection. According to governing board of the Waorani people, 70% of the community’s inhabitants had symptoms of Covid-19.

Nemonte had to create her own protocol with help from the Simon Bolivar Andean University, as the government did not do it. Although the majority had recovered she feared the consequences of this disease on the community’s elderly, who represent the spirit of their tribal communities.

Born into the traditional Waorani community of Nemompare, situated on the River Curaray in the Ecuadorian Amazon, Nemonte Nenquimo grew up with her grandfather, a leader and warrior who defended a vast territory in the heart of the jungle known today as the Yasuni National Park. He taught her father, and then her, the guiding principle of their struggle: “The forest teaches us to live and our culture teaches us to protect the forest”.

Nenquimo, who is carrying on the legacy of her ancestors, travelled with the women of her community to the east of the Amazon jungle.

This part of the jungle is the territory of the Kofanes, Siona and Secoya peoples who lived through the destruction of a lush rainforest whose trees were sacred and symbols of fertility and which was turned into hectares of fields cleared of trees and drilled for oil deposits.

On 26th April 2019, Nenquimo led a historic legal victory against the Ecuadorian government. The judgement in favour of the community recognised that their rights to free, prior and informed consent and to self-determination had been violated by the “Oil Block 22” government tender which threatened to flatten almost 200,000 hectares of primary rainforest, for centuries the home of the Waonari people.

Nenquimo was included in the list of the 100 most influential people in the world and spoke to The Prisma about the recognition she received from Time magazine, the Waonari, and the importance of recognising the leadership of women.

What does this recognition mean to you?

It gives me strength because it is the first time the face of an indigenous woman has been recognised in the world. I want to give a voice to women in general. In the Waonari nation, women and men are leaders, decisions are made jointly, but often in the West, importance is only given to the word and work of men. 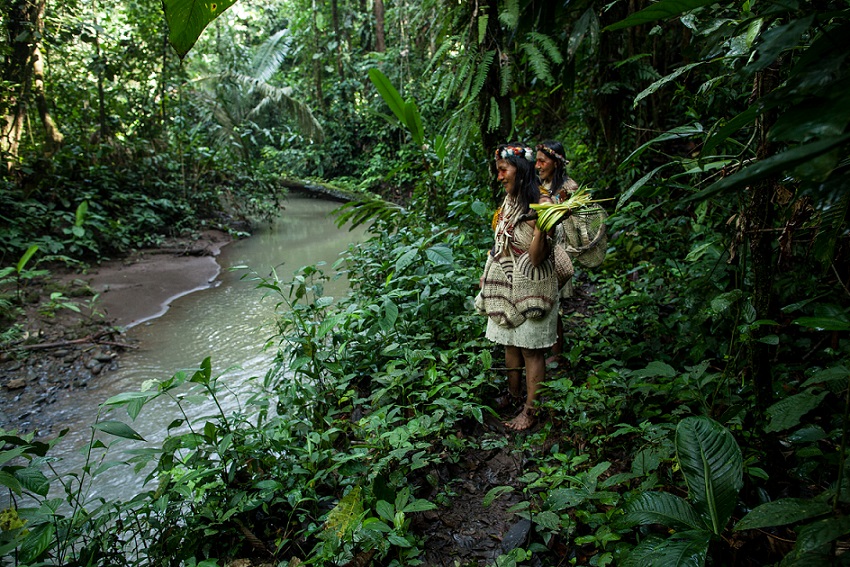 As indigenous women we risk our lives. Capitalism is a major threat because they want to exploit our resources, they are killing us and invading our home to develop the country.

Our concern is global. It is not just indigenous people who are the guardians of the jungle. We are all in this together because we are all in danger.

How would you describe the Waorani people?

The Waorani, we are jungle people and we only made contact with the western world 50 years ago. We maintain our roots and we live deep in the jungle, free and without contamination. We protect it since it is our pharmacy and our products are there. The Amazon is our home, it gives clean air and life to the world. The struggle is not just for the indigenous peoples but for people in general.

How do you define yourself?

I am a woman and leader of the community of Nemompare, Pastaza (on the border with Peru) where my family and I live. I was born, grew up and live in the place where I learnt the struggle of my ancestors. Indigenous people everywhere respect Mother Earth because she has given us life for many years.

We know that if we do not protect her we will be in danger and we will not leave a legacy to our children.

Last year I strengthened the recognition of the Waorani people and it makes me proud that it is a collective struggle lasting thousands of years and we are still fighting.

What do the older people say about global warming?

My father grew up without contact with westerners. In his youth, he grew up without noticing climate change, but now he sees changes in the Amazon. He says the water, wind and rain are different. We are risking and destroying the planet. Nature cannot maintain a balance if we are all destroying it. We are contaminating the sea with rubbish; we are contaminating the Amazon with oil spills. The exploitation of land puts our life in danger. We need to take a stand as a society to stop it and prevent global warming from worsening.

That is our contribution as indigenous peoples, that is why we defend our territory, we don not want to destroy the rainforest which is so important to our planet, if we keep planning to destroy resources we won’t leave anything to future generations, not even money will save us.

How has Covid-19 afected the Waorani?

It has affected us a lot because the Ecuadorian government did not take measures to prevent the virus reaching the communities.

While the cities were paralysed by the lockdown, the oil company carried on working near us and infected us. The Waorani, we are not used to being still and as we walk several kilometres a day the contagion was faster. Even I was infected for 14 days in hospital. But thanks to the knowledge of our medicinal plants my community and I recovered.

It worries me that the grandparents might die because in our culture the elderly are guides, they have ancient knowledge that we do not want to lose. That is why it was important to protect them, but the governments took advantage of the lockdown to do what they liked in our territory. Governments often do not respect us but winning a court case against the Ecuadorian government inspires me a lot. That victory is not just for my people but for all the indigenous and Amazonian peoples of the world.

How did the community organise itself to take the Ecuadorian government to court?

For me as a woman it is a collective effort. At the beginning all the women grandmothers, mothers and girls united to defend our territory for our sons and daughters.

We want them to feel free and to live happily. Then we started to include men. It was a hard task, thinking together.

The jungle is our home and we do not want the oil company to destroy everything that we are as it has done in the territories.

Often the government says that if we allow the extraction of palm oil or timber they will give us education or health services, but as Waorani all we see is our waters getting dirtier and our waters are our only source of life as we wash, fish, eat and live there.

This is a precedent that has gone down in history demonstrating that, although we are a minority, we have wisdom; the knowledge of the spirit of the tropical jungle. Our struggle is from the heart, the only wealth we have in the community of Pastaza is a green jungle, we want to conserve it for future generations and contribute to the life of the planet.