The collapse of the USSR, led to massive social inequality and migration from the ex-Soviet Republics by people desperate for work. The situation is exacerbated by corrupt police and a barely-functioning justice system. All kinds of slavery are proliferating as migrants are exploited. 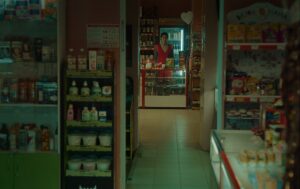 Male life expectancy in Russia has risen and fallen in line with economic conditions, but after more than a decade of recovery due to oil and gas exports it is still about 10 years less than in Western Europe.

One of the consequences of economic uncertainty has been increased migration from the ex-Soviet Republics to Moscow and European Russia.

Michael Borodin’s ironically-titled film “The convenience store” is a docu-drama based on the story of the Golyanovo Slaves, which also takes the opportunity to cover other kinds of slavery and trafficking in present-day Russia.

Organisations such as the Civic Assistance Committee struggle to help migrants in these desperate circumstances, but are hampered by police corruption and inefficiency, and also by the Foreign Agents Law, which has just been declared illegal by the European Court of Human Rights (ECHR).

I spoke with director for The Prisma, after his film was shown at the Indielisboa film festival. 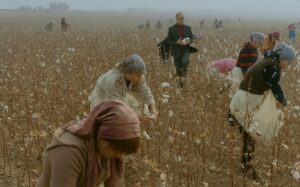 The film is subject to censorship in Uzbekistan, but in Russia it was sponsored by the Ministry of Culture.

Censorship and artistic councils have remained in Uzbekistan since Soviet times.

This money is spent in Russia to support people who work in the industry. Before the invasion of Ukraine, I did not have an internal conflict with receiving money from the Ministry of Culture, but now I do not accept money from the Russian state. 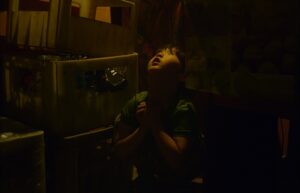 The police are corrupt, what powers do NGOs have to help migrants like Mukhabbat?

The Civic Assistance Committee is a non-profit organization that has existed for many years and helps all refugees and migrants in Russia: they are doing a huge humanitarian work. It is classed in Russia as a foreign agent and does not depend on the state in any way. They give every possible legal help, submitting documents, attending court, filing complaints with the police, and submitting cases to the ECHR.

Zhanna is Russian and childless. What else do you know about the real person?

The real Zhanna is not Russian, her name is Zhanar. In the film she has no children, but in reality, this is a big family, and they are all involved in this so-called business. The people who were in her captivity say that she is unbalanced, a maniac who could kill them. She took these children and they disappeared.She kept some for herself, despite the fact that she has her own children. Explaining this situation was a difficult task, which needs a longer story, so we portrayed her as childless.

The case is going to the ECHR. Does that mean that Russian courts would not hear it?

The Civic Assistance Committee filed statements with the police about eight times. And each time they were denied initiation of criminal proceedings.When you are denied a criminal case on the grounds that no crime was committed, there is nothing left but to turn to the higher courts. The ECHR contacted the official body in Russia, which replied: “No, no crimes were committed, the Russian Federation is not to blame for anything”. This answer allowed us to move on and ask the ECHR to hear it. After February 24, I do not know whether the ECHR will continue to consider this case, and lawyers say that there is only a small chance that it will require Russia to pay compensation. Rulings by the ECHR do not mean anything for the Russian court. People have been in slavery for so many years without justice: this store is still open. 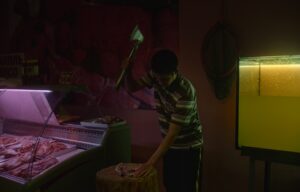 Did the extreme violence shown in the film really happen? Have there been other cases?

Yes, including murders. Even from the stories of those women who were in this store. There was a woman whose legs were covered with bleeding veins. The real Bakiya has crippled hands and face, she needs to inject a special drug to reduce her tic. She had all her teeth knocked out. She and her child, who was born there, have big health problems. We decided to concentrate all this into one or two scenes in the film. I can’t comprehend how people survived so much cruelty.

There were black girls at the NGO.

This organization rescues people from slavery of all types: labour, forced begging, sexual. It is paradoxical that the number of people trafficked out of Russia into sexual slavery and the number that are brought into Russia for sexual slavery are approximately the same. African girls are promised work in Russia, but they are locked in a flat and forced to have sex. During the 2018 World Cup, entry was simplified for foreign fans, and many African women were brought in using this visa to work as sex slaves, they are hostage not prostitutes. 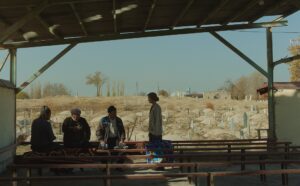 This very small organization is trying to help them. Larger organizations like the Civil Assistance Committee then help draw up documents, which is very difficult.

Zhanna is very confident that Mukhabbat will return to her, in order to find her son whom she left behind with Zhanna, and because of the impunity that exists in Russia.

Yes, because in all these years, except in 2012, despite journalists’ work, nothing happened to her or her business. She is absolutely sure that she will not suffer any punishment.I got into this story in part because I was trying to figure out how people are allowed to do such horrible things. It is the same story of impunity and unlimited power that we see in Russia at the state level.

Did this exploitation of migrants exist before the end of the USSR?

Probably not, because the USSR was still a fairly social state. But with the collapse of the USSR and the economic situation that followed, people travelled wherever they could to earn money. 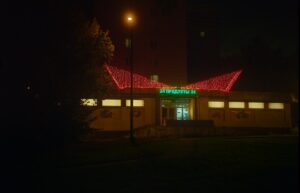 In the 2000s, economic recovery began in Russia from the sale of oil and gas, so people from Uzbekistan began to leave for places where they could earn something to feed their families in their homeland.

There were some symbolic moments in the film – A man on a donkey rides into the shop, the flock of geese following the ticket inspector, the final scene.

These scenes came from the need to capture the horror of violence and slavery in the store and translate it into an artistic image. It seemed important to give a hint of justice in the film – that Mukhabbat will be with her child, that the store will collapse and remain just in history, but there could be no happy ending.

These fantastic images exist only because it is the heroine’s inner impulse to find justice. I used fairy tales and translated it onto a symbolic plane, where all these elements seem to lead her home and back to what she was striving for. 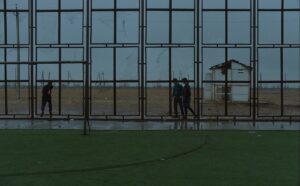 Lifting the store on a crane symbolizes the fact that it is still working and seems to be hovering above the city.The story is real, but it was too cruel to show as pure documentary. We tried to show the root of the circumstances into which people fell with fantasies, with dreams, with the horror that is experienced inside, and there is some way out, albeit a strange one.

(Photos supplied with the kind permission of Metrafilms)