Bruno Pereira, a Brazilian expert on isolated tribes, and Dom Phillips, a renowned British journalist, disappeared in a remote area of the Amazon rainforest on 5 June. They were brutally murdered in the Amazon after receiving death threats. An interview with Bruno’s father-in-Law, the Indigenist Kleber Gesteira Matos. 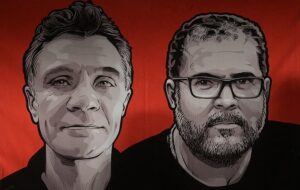 The suspects, who confessed to the crime and led the police to their remains, belong to a criminal organisation operating in this region of the Amazon.

Bruno (also known as Univaja) delivered a dossier shortly before their death to the Brazilian Federal Police and Public Prosecution Office, documenting the names, criminal actions and modus operands of several criminal organizations. The Brazilian police, who only started a modest search effort 48 hours after they went missing, ruled out the existence of other suspects ordering the crime.

Bruno Pereira’s father-in-law, Kleber Gesteira Matos, also an indigenous expert and one of the biggest names in the field in Brazil, spoke at length and emotionally in this interview about the tragic death of his son-in-law and British journalist Dom Phillips, the love for the Amazon and the indigenous people.

Matos is a former coordinator of Indigenous School Education at MEC and was responsible for training teachers, producing specific teaching materials and building schools on indigenous lands.

How did Bruno fall in love with the Amazon and the indigenous people?

As a student in Recife, Bruno went to Balbina, one of the biggest environmental disasters of the Brazilian government, a hydroelectric plant built by Eletronorte in Amazonas that flooded indigenous lands and devastated the local ecosystem.

He worked there for a time in botany and came into contact with the Waimiri Atroari, a very brave indigenous group who live in the region between Manaus and Boa Vista, and on behalf of whom the Federal Prosecution is sueing the Brazilian state for their genocide. Their territory was partially flooded by the dam.

Bruno went to Manaus and approved the FUNAI (National Indian Foundation) exams and then went to the southwest of Amazonas. In this region there are two very different situations: one is the Ticuna, where there are many villages on a tiny area of land populated by a single ethnic group. Recently, some of them started calling themselves Kokama.

The other situation is the Vale do Javari.

As Bruno was interested in the low-contact population, he worked as the general coordinator of FUNAI in the region and then moved on to the Vale do Javari, where he became the general coordinator of the so-called free peoples, or independent peoples. This is his journey, always in search of the Amazon. And he came to work in one of the deepest areas of the Amazon, which is the non-contact or little-contact population.

Can you talk about the work he was doing in the region where he died?

Bruno is a man of many facets. One special talent he has, which helped him a lot, was to organize coverage by mass media and journalists. Recognising the historical, strategic and human importance of isolated peoples, with few members who form an ethnic group, he started inviting various journalists, including Dom Phillips, to get to know the reality of the Javari Valley. One facet of his work is social communication. He even got Sebastião Salgado involved. He understood that communication was essential for the safety of these peoples and the preservation of their ways of life. Bruno dealt with several conflicts between the Javari ethnics, conflicts between two local peoples, the Matis and the Korubo. He managed to disarm the Matis, who had firearms and to create a dialogue between these two groups. He is a leader, he was not just a diligent employee. He had a great capacity for leadership andorganization, and he applied this to the fullest extent.

He had a leadership and charisma that was independent of the position he was occupying. So much so that he was dismissed from FUNAI, but he continued the work that he had already been developing as a Brazilian civil servant.

How did Bruno manage to combine this work with his family life?

By entering a territory packed with traffickers and criminals, Bruno began to do work that was also very important for the Brazilian State and that has not yet been recognised. Bruno rendered an enormous service to the Federal Police, to the security system in Amazonas and to the Army itself, by pointing out regions where there was more danger of trafficking, characters and situations with which the Indians found themselves involved by traffickers. And then on the unusual relationships for the Brazilian security agents of hunting, fishing and trafficking, illegal mining etc. It was delicate work that went from playing with the Indians’ children to confronting the traffickers. Bruno was also a good teacher. He created a project to train young indigenous leaders to monitor and protect the territory against invasions, for example by documenting the invasions with drones and satellite images. This is not something that is easy to do. I had the privilege of knowing him intimately: him playing with his children, cultivating his plants. I have a huge collection of small plants and flowers grown by Bruno.

Did Bruno know who was threatening him?

Bruno was a brave guy, not that he was irresponsible, but he could not be intimidated easily. I don’t have the details of the knowledge he had about these characters, but what I do know is that he was able to deliver a dossier to the Federal Police and the Public Prosecutor’s Office, also identifying security problems in the Vale do Javari. He had information about the various risks of confrontation and listed these risks in the dossier. He knew the region and the inhabitants of each community well.

When travelling in the Amazon, one depends on the riverside communities to get around. Bruno knew all of them and disagrred a lot about their typical practices, for example, fishing with nets or dropping dynamite in rivers to catch them.

Have the Federal Police and the Public Prosecotor taken steps in response to this dossier?

I do not know what is happening with the Federal Police, which has been acting very differently during the current government than how it did during the previous government of Temer. There is a total disconnection. To give you an idea, in the episode of the disappearance, the Indians started to look for Bruno at 1 AM on Sunday and the Federal Police only arrived on Wednesday. At that speed you can’t arrest many people.

I knew Bruno was dead from the simple fact that he knew the area very well. Bruno would not have been lost all this time. He learned from the Indians and his intelligence and ability to observe how to get around, whether it was in the highlands, lowlands, wetlands, drylands. I never got that knowledge in years. He wouldn’t have been lost for more than half an hour. I’m guessing he was hit by gunfire. Bruno is very tall and strong, in a fight he could win, if they did not use a firearm, they would not be able to take him down easily. The president was cynical when he said it was the hitman’s fault.