Rebecca Tamás begins her book “Strangers” by recalling the 17th century Levellers and their proto-communist calls for radical democracy and common ownership of land. 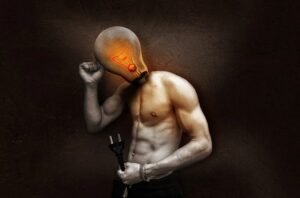 She is drawn to their prescient awareness of the need to connect political awareness with ecological concerns, the human and the nonhuman.

As Gerrard Winstanley, one of the founders of the Levellers, put it: “True freedom lies where a man receives his nourishment and preservation, and that is in the use of the earth.”

Such joined-up thinking lies behind the explanation by Black Lives Matter of their 2016 protest that closed down London City Airport: “Climate crisis is a racist issue. 7/10 of the countries most affected by climate change are in sub-Saharan Africa.”

A novel by the Brazilian novelist Clarice Lispector, “The passion according to G. H.”, is used by Tamás to underline the idea that “human ideas of reason and progress are only casings around the unspeakable purposelessness of existence”.

A lack of purpose, though, does not mean everything is pointless and it should, instead, remind us of human interdependence with the nonhuman.  Another Latin-American, Ana Mendieta, is also called on to emphasise the porous boundaries between these two parameters of existence.

“Strangers”, in seven essays and barely over a hundred pages, offers a series of reflections about life. It touches on matters ecological, political, philosophical and psychological.

It is also a deeply personal account and in the essay “On grief” Tamás writes of her own history of depression and the sense of “climate despair” that is shutting down people’s ability to think and act critically.

She is sceptical of those environmentalists who think some technological solution, some super mechanism for carbon capture, will solve the problem and allow capitalism to continue.

Tamás is a poet and her first collection of prose pieces yearns to express itself in poetic language that will do justice to her sense of the hurt being caused by an economic system devoted to making profit. 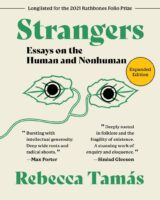 In her essay “On Everest” she pinpoints the mentality of those who climb the mountain as indicative of the attitudes of those who wreck the planet in the selfish pursuit of “self-actualisation”. It is more than ‘the embarrassing big dick display to end all big dick displays’ because, as she goes on to show, mountains have been used to promote nationalist and racist notions of pure blood.

The cult of masculine valour, the reaching of summits, saw swastikas flying over Alpine huts as early as 1924. The celebration of endurance that Everest now epitomises “is a pathetic expression of our inability to feel real in the reified world we have created, and of our desire to avoid the really hard things, which live inside”. Tamás sensibly observes that there are other very hard things to do rather than climb Everest.

“Strangers” is an articulate cry from the heart for a saner world and the abandonment of ways of thinking that are making it insane.

“Strangers: Essays on the human and nonhuman”, by Rebecca Tamás, is published by Makina Books.