The gas emissions from flights make up 2.4% of the world’s total carbon emissions and even a flight of a few hundred miles produces up to 50 times more pollution than a high-speed electric train. 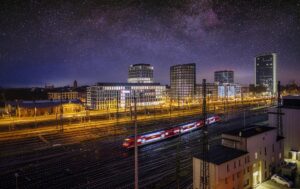 When you consider that some 75% of the world’s population never fly anywhere that makes those who do even more responsible for the environmental Armageddon we are hurtling towards.

Gandhi’s remark about being the change you want to be comes to mind. Those of us who fly could plan sustainable journeys that depend on other means of transport. This, though, is more practicable for some journeys than others –slow travel earns its name when   travelling to South America on a freighter takes more than 40 days– and a new Lonely Planet guide sticks to train travel in Europe.

The guide is structured around six high-speed routes crossing the continent from transport ‘hubs’ like Paris or Milan. Each hub serves as a place to change trains to reach your desired destination without the hassle of luggage carousels, passport checks, shuttle buses and running the gauntlet of consumerist temptations disguised as duty-free shops. 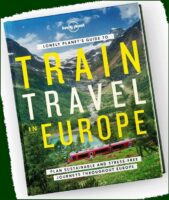 ‘The sound of Europe arriving in the modern era is the shrill whistle of the steam train’ – the book’s introduction reminds us that train travel originated in Europe – and the allure of train travel is the way it evokes a past age, arriving in stations where ‘bystanders once saw steam engines miraculously materialise in a puff of smoke.’

Nowadays, the fastest trains are capable of going half the cruising speed of a jet airliner and you need in factor in the time saved by not having to get to and through an airport.

A fast train takes 6½ hours from Paris to Milan, compared to 1½ by air, but there are the stressful hours it takes to reach the airport and be processed there, as well as the time getting off the tarmac at the other end and boarding a shuttle bus to the city centre.

Milan’s airport cannot compare with the grandeur of the city’s Centrale station with its 24 platforms and the journey there in a narrow airborne tube cannot compete with scenes of the French countryside, navigation through the Alps and entrance to Italy through the 12km-long Fréjus Tunnel.

“Train travel in Europe” justly praises the advantages of sleeper trains but without drawing attention to the fact that presently there are not that many options.

The sleeper service that used to connect Paris with Milan and Venice has been discontinued and the remaining Venice Simplon-Orient-Express is a hugely expensive affair beyond the means of most people. 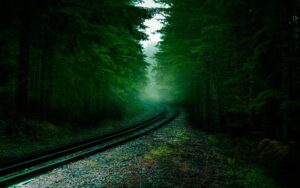 The Caledonian Sleeper service between London and the Scottish Highlands is highlighted as one of Europe’s iconic sleepers but many travellers who have experienced the cramped accommodation, frequent delays and mediocre breakfast will beg to differ. None of this, though, can dampen the spirit and this guidebook will capture your imagination and suggest new ways of travelling across Europe.

“Train travel in Europe” is published by Lonely Planet.