In Northern India, in Himachal Pradesh, the state where a part of this mountain range lies which also hugs the borders of China and Nepal, the present reality surprises pilgrims who arrive in search of the spirituality that has characterized this mountain chain, one of the most important in the world. 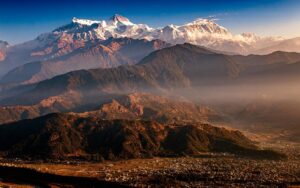 There, in this place whose Sanskrit name is Jimalaia, irreversible changes have disturbed the religious scene: the majority of the rivers have disappeared and those that remain are contaminated (including the Ganges) , the lands have dried up, traditional crops are not cultivated, the notion of village life has been lost, ancestral textile-weaving has been displaced by technology, and the people have to travel long distances to find food.

To all this must be added the disappearance of 90% of the forests, and the loss of that feeling of sanctuary and tranquility which always enveloped the Himalayas, related to the spiritual life of India.

This all began some time ago during the Indian frontier wars, which involved Kashmir, Himachal Pradesh, and Uttar Pradesh, as well as other countries including China, Pakistan and Afghanistan. Wars which sought territorial and political independence and have distorted the geographical essence of the region, because the caves where people once visited the holy men who lived in them, have been turned into hiding places for soldiers and fugitives.

Later the foreigners arrived, whose habits have had an impact on the cultural and religious life of Himachal Pradesh, creating a new economic structure based on the “religiosity of pilgrimages”. 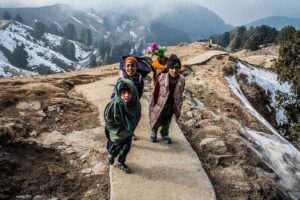 The travellers who once left gifts in the temples, today seek a comfortable stay, hotels and restaurants offering the conveniences they are used to at home, and scour the narrow streets in search of souvenirs to show on their return; and they also come looking for ways to spend “a nice time with someone special” . (Prostitution has become something that is growing slowly and secretly, influencing Hindu customs more and more).

Others come for Marihuana, changing the significance of hemp, which used to be valued because of its fibres used in making the ropes for shoes, and for its seeds rich in proteins. The income from pilgrimages has allowed the Central Government to build luxury hotels in cities like Yamanutri and Gangutri, side-by-side with both the temples sought by pilgrims and the so-called “houses of profanity”. Nevertheless it is not always the inhabitants of these cities who benefit, but the temples and the local communities.

The poorest workers of Himachal Pradesh live in just those places that have been developed for tourism, and although visitors don’t see the extent of the poverty, it certainly exists. A poverty which has grown little-by-little, since the local people began to give up their traditional ways of life.

More than 50 years ago sheep- and goat-farming were the most important economic activities in the region, and they made agriculture important because they supplied wool, while the manure that the sheep and goats dropped gave fertility to the crops. 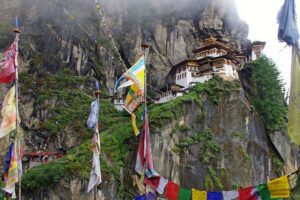 During the winters the shepherds survived because the settled communities offered them rice, corn, sorghum, chickpeas and beans. And they in turn were supplied with lamb for the cold weather. So the wool trade thrived.

But with the passage of time this trade dropped off, mainly due to the conflicts between China and India, and nowadays woolen fabrics are a rarity. Another factor was  the Indian Government’s belief that sheep-farming is simply an anachronism which does not deserve support, without considering the consequences of their policy: that in the Himalayas it was necessary to find an alternative source of income, and that the market for its products was bound to disappear.

The residents of the big farms also lost because they changed their habits, and now have to buy manure and chemical fertilizers, and adopt modern agricultural methods; the Government being the most important promoter of improved potato and apple seeds, whose policy directly, in the lowlands, is replacing the traditional varieties of rice and wheat by hybrids developed in the green revolution.

In India before the green revolution there were 20,000 varieties of rice. Today only 5,000 are left. In addition the harvests are smaller because trees on the wooded hills have been felled, so the ground has eroded and manure is worthless.

Without shepherds, without a diversity of cultivation, the Himalayas provoke a feeling of sadness: of the forests which were there half a century ago only 10% remains; native species such as oaks, cedars, pines, acacias and medicinal roots have all disappeared. 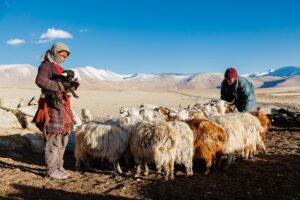 It is also difficult to find birds, insects, fungi (which used to be an important source of income), and other valuable species, and tigers, leopards, sheep, goats and deer are extinct. Because the forests are now so small there is now even more pressure on them, since their loss makes it impossible to find wooded areas with trees that can still be felled…

In 1982 Indira Ghandi prohibited tree-felling for 10 years and declared her opposition to the commercialization of timber. When this period expired the government of Himachal Pradesh maintained the prohibition. None the less Uttar Pradesh and Kashmir resumed cutting under the supervision of the Forestry Corporation, part of the Indian Government Forestry Department.

It is true that the Indian Government instructed Himachal to start cutting trees again, but they objected that most of the hydro-electricity supplied to other states depended on the Himalayan forests, and if they wanted dependable supplies to continue, it was necessary to maintain the forests intact, to protect the water basins and avoid droughts.

Who wants and apple ?

To all this can be added the pressure on the forests caused by apple-growing, in the same way as potatoes which arrived in Simla, the capital of Himachal, over a century ago: the forest was cut, because before 1947  the government supported the large scale cultivation of potatoes, and small family market gardens were converted into extensive farms, which needed less labour, but yielded big harvests thanks to the application of fertilizers. Today in Simla only one wooded hill remains… because it is the basin of the river which provides water to the people and it is a protected area. 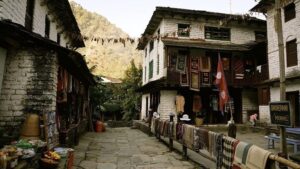 At the same time as potato-growing started to decline the sowing and commercial production of apples began, without awareness of its destructive consequences. Inevitably then, at the end of the 1970’s the Government of Himachal mounted a publicity campaign in favour of apple-growing, promoting the sale of seeds and greenhouses so that the peasant farmers could buy them at the lowest prices, and offering subsidized fertilizers, insecticides and pesticides, advice on cultivation, as well as subsidizing the purchase of Japanese machinery for the application of pesticides. So, gradually, the people began to benefit from the harvests, and finally managed to overcome the resistance of their parents and grandparents, who did not want to lose their traditional ways of working the land. Besides this the younger generation preferred to look for less arduous kinds of work.

It is the case now that more than a third of the population is involved in apple-growing and the Central Government sees Himachal as the apple-growing province of the country, and is committed to encouraging other states to follow its example. Faced with this undesirable prospect, environmental leaders have protested publicly and even taken part in hunger strikes.

On occasions the farmers themselves have expressed regret for the loss of their tradition, because once people receive money they forget the deeper issues.

And although apples are not the biggest product of the economy either of Himachal or of India, there is a demand for them in other parts of the country, for which Delhi, Calcutta and Madras are the main distribution centres. Besides this it is undeniable that they have increased the income of the region.

However the environmental costs are unknown, because the seed stocks as well as the knowledge of native farming practices have been lost, and replaced by a monoculture which increases the problems resulting from pesticides and diseases. The search for new areas for sowing has become more urgent, even to the extent of invading virgin forests to cut down trees and sow potatoes and apples.

At the same time, due to erosion the productivity of the big dams has fallen by half, and there is less electricity, less water for irrigation, and worse flooding during the rainy season.

At the same time the shepherds have given up their work in favour of apple-growing.

This has led to a great loss of traditions: social life has been fragmented and hence also has religion.

Neither is the quality of life any better, public health has got worse and the average diet is deficient, because now there is no variety of foods… the vitality of the countryside is being lost.

Moreover it is not possible to return to the past, the only possibility of rescuing the Himalayas is to restore traditional cultivation methods, shepherding, and respect for the forests. Because their religious meaning has been lost, and visitors who arrive there today from other parts of the world, already do not find the exuberance of the forests, only desolate mountains and a desecrated landscape.