The cover of the CD, Home, from electronic, drum and bass outfit, Rudimental, features the Hackney Peace Mural. 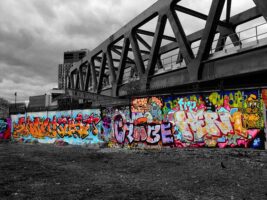 I remember it being painted in 1985. I am surprised that it still exists and has not been painted over, in some act of so-called urban regeneration.

The mural represents the high-water mark of municipal socialism: anti-Thatcher and anti-nuclear weapons.

Wall-art, such as graffiti, also frequently represents an anti-establishment outcry, although less articulate or overtly ideological.

One such was the Walker between worlds, on the side of a house on Westbourne Park Road in West London.

The painting combined an urban vibe with a shamanic, mystical tinge as this wanderer, hands outstretched, channelled the energies of black alienation joined with street style. 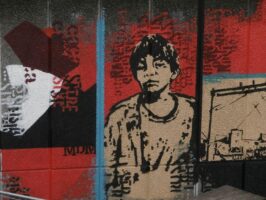 This graffiti has since been covered over. Walking past, I noticed new luxury flats being constructed on the side of the terrace where the image had sat.

The new inhabitants will be ignorant of the past which their home abuts. It will simply be their dwelling space, with no knowledge of what preceded it.

The cityscape is composed of layers, sediments, strata of concrete, physical, time.

History comprises not only memories in the mind, but material deposits in the architectural infrastructure.

Graffiti is palaeographic: creating relics, residues, remnants, of resistances to the incarceral, modular, constructivism of the dominant social order.

The reconquest of inner city zones, by returning conquistadores of the super rich, attempts to erase these signs, to present a tabula rasa for their consumptive, consuming, cosmopolitan, lifestyles. 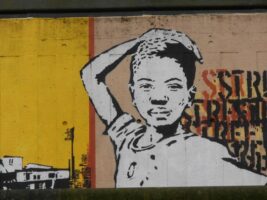 The resultant urban palimpsest, inscribes fresh messages over the older etchings on the metropolitan parchment, seemingly expunging all previous markings.

But the significance of the past cannot be removed completely. Traces remain, though these may be mired in the plasterwork and paint of gentrified redevelopments.

They re-emerge unbidden along a different concept of time; not the linear exposition of chronos, but the sudden, timely not time-bound, eruption of kairos, the now-time, the shock-time.

How surprised the owners of these luxury flats will be when the ghost of this youth appears, stretching out from the wall of their apartment, to stalk through their rooms at twilight.

Was this not the meaning of the 2011 riots, and of every so-called ‘disturbance’? An up-rising, a rising-up – not consciously political but of the unconscious; the repressed, recessed, soul of the polis.

Spectres and spirits haunt the fetid, fevered, dreams, of those who are colonising the urban spaces, preventing them from resting secure in their beds. 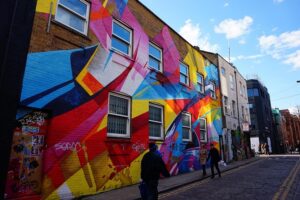 Voices speak from the neon-lit darkness. I am reminded of one graffiti tag, Relik. He wrote all over West London.

Reminiscent of the religious term, relic, his occult accents pronounce, in distorted form, the transcendent echo of the Other challenging the isophrenic flattening of the renovated city.

Like the horse of the apocalypse running graffiti-loose in Brixton, this is a harbinger of judgment for the cities of the plains.